People looking or driving northeast of New Plymouth or east of Payette need not be concerned about fire they are seeing, as the flames are the result of natural gas well testing, the latest step in an effort to begin getting production started in Payette County.

Richard Brown, CEO of Snake River Oil and Gas, said the testing will go on for two to three weeks.

Snake River Oil and Gas, in partnership with Alta Mesa Holdings, purchased the assets of Bridge Resources last year, including 11 wells, seven of which have production capability, Brown said.

Three of the wells are now under intensive testing, which will help company officials understand the size of the reservoir and will be indicative of the production of the other four wells, Brown said.

The companies have approximately 300 to 400 oil and gas leases on about 130,000 acres with a number of landowners, he said.  Seismic work was conducted in the area last fall, ending in November, Brown said. END_OF_DOCUMENT_TOKEN_TO_BE_REPLACED

Idaho’s next chapter of drilling for natural gas has begun.

The Argus Observer reports that drivers northeast of New Plymouth or east of Payette may spot flames spouting from natural gas well testing in the region.

The Observer’s Larry Meyer reports that Snake River Oil and Gas has launched “intensive testing” at three wells, to help determine production viability.  The testing is expected to last two to three weeks.

Snake River, in partnership with Alta Mesa Holdings, purchased a number of wells from Bridge Resources in 2012, after the Canadian-based company liquidated many of its assets, in the wake of financial troubles at the height of its 2011 drilling operations.

Snake River is currently testing wells purchased from Bridge Resources.  No new wells have been drilled. 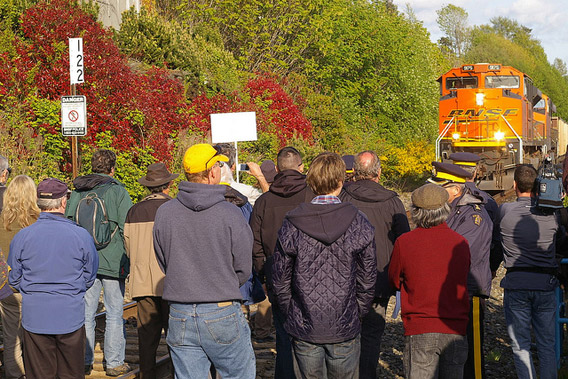 As the environmental impact statement (EIS) scoping period for the proposed Gateway Pacific Terminal at Cherry Point, Washington, draws to a close on January 21, and public comments on the Coyote Island Terminal in Boardman, Oregon, are long past due, federal, state, and county decision makers never provided public hearings in Idaho and Montana or a mine-to-port regional programmatic environmental analysis.  Nonetheless, residents of the comparatively rural inland Northwest, especially near Powder River Basin coal strip mines and train routes through Montana population centers and along the railroad funnel between Sandpoint, Idaho, and Spokane, Washington, will bear most of the adverse risks and consequences of domestic coal export to Asia, while Ambre Energy, Arch Coal, Peabody Energy, SSA Marine, and other giant coal companies reap billions of dollars in profit on up to 160 million tons of coal per year, at taxpayers’ expense.

Between January 11 and 20, 2013, Blue Skies Campaign, Occupy Spokane, and Wild Idaho Rising Tide are staging four or more coal export solidarity actions at train track/roadside intersections in Moscow and Sandpoint, Idaho, Missoula and other cities across Montana, and Spokane, Washington.  But we need your help to powerfully demonstrate our collective regional resistance to coal export schemes perpetrated by industry and government.  Tell the U.S. Army Corps of Engineers and Surface Transportation Board, state and county regulatory agencies, and the Burlington Northern Santa Fe Railroad, not to mention the world’s largest private coal companies, that Northwesterners will not tolerate their dismissal of community concerns and environmental wellbeing so apparent in their purported public participation processes and mercenary ventures. END_OF_DOCUMENT_TOKEN_TO_BE_REPLACED