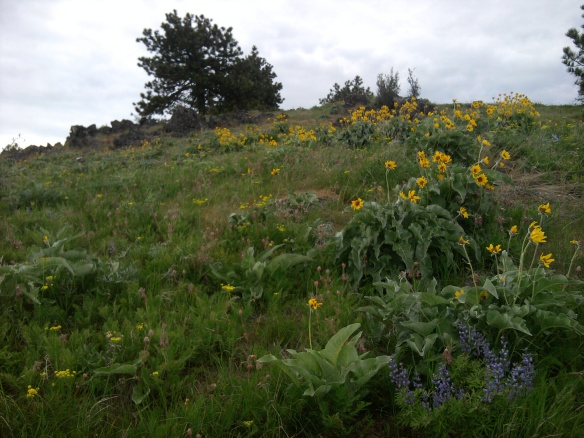 To avert potential damages to fragile, remnant Palouse Prairie during this outing, the Paradise Ridge Defense Coalition (PRDC) is limiting participation in a guided wildflower hike on Paradise Ridge to PRDC members and member organizations (Palouse Audubon Society, Palouse Broadband of the Great Old Broads for Wilderness, Palouse Environmental Sustainability Coalition, Palouse Group of the Sierra Club, and Wild Idaho Rising Tide).  Please meet at 1:30 pm on Sunday, May 31, at the University of Idaho Arboretum parking lot off Palouse River Drive, west of Highway 95 in Moscow, Idaho.  Attendees will carpool to the starting point for a hike to the top of Paradise Ridge, where we will visit the best sites of the last one percent of original Palouse Prairie.  Wear good walking/hiking shoes and bring a water bottle.  Event coordinators plan to offer plenty of opportunities for questions during the event lasting 2 1/2 to 3 hours, including travel time.  PRDC board members invite you to join as a member and a Sunday hike participant!

On Thursday, May 28, 2015, Wild Idaho Rising Tide and allied activists plan to protest the Bureau of Land Management (BLM) oral auction and sale of leases of public oil and gas and minerals in the Little Willow Creek watershed six miles east of Payette, Idaho [1].  Managing 700 million acres of sub-surface minerals and more acreage (245 million) than any other federal agency, mostly in the western U.S. and Alaska, the BLM operates under the U.S. Department of the Interior.  Its Idaho State Office, at 1387 South Vinnell Way in Boise, will open registration to the public and prospective buyers at 7:45 am on Thursday and will begin the auction at 9 am in the Sagebrush Conference Room, offering five parcels totaling 6,475 acres for minimum lease bids of $2 per acre, following the national standard.  According to a map of the BLM proposed Little Willow Creek oil and gas leasing area, only one of the smaller parcels is available for oil and gas development, while the majority of the tracts could provide opportunities for private extraction of all federal minerals present [2].

Although the BLM asserts that this lease sale would “prevent federally owned oil and gas from being drained without compensation to the United States in the form of royalties,” “by law the Bureau of Land Management cannot auction off public lands to the oil and gas industry unless drainage is actually occurring” [2, 3].  For years, the primary architect of recent oil and gas wells, a processing plant expanded before completion, and gathering lines connecting all of this Payette County infrastructure, Alta Mesa Idaho (AMI) has pressured the BLM to open its public resources to its pursuits.  AMI’s environmentally, socially, and financially irresponsible onslaught of development has begrudged mandated, protracted, public review of BLM leasing proposals within the context of broader federal regulations, significantly more stringent that state oversight.  The Boise-based BLM Four Rivers Field Office confirmed in April 2015 that “no surface occupancy and no subsurface occupancy will be permitted until the Four Rivers Resource Management Plan is completed, which is scheduled for 2016” [1]. END_OF_DOCUMENT_TOKEN_TO_BE_REPLACED

If built on the eastern route referred to as E-2, a new section of U.S. Highway 95 would start near this cell tower, travel north through a grove of trees, and continue across this grassland (Geoff Crimmins /Moscow-Pullman Daily News photo).

The scene to the west of U.S. Highway 95 – and its three proposed realignment route choices – is breathtaking from Paradise Ridge, with rolling green meadows and the occasional picturesque structure in spacious rural settings.

The existing highway is off in the distance and only takes up a small section of the view as cars and trucks appear to be rolling specks. But look down at the knoll underfoot and prairie flowers – iris, camas, lupine, groundsel, lomatium, prairie smoke and arrow leaf balsamroot within other native plants, invasive weeds and planted grass – pop up here and there.

Steve and Mary Ullrich, both members of the Paradise Ridge Defense Coalition, live nearby the section of the ridge, where they marked a site with a long line of red balloons stretching about 600 feet. The section is one where plenty of animals roam and some ponds are on the far side of the balloons.

The balloons marked the approximate width and location where the highway realignment preferred by the Idaho Department of Transportation would run. ITD refers to it as E-2. That plan and the other two options, C-3 and W-4, will improve 6 1/2 miles of the highway running south from Moscow to Thorncreek Road.