The Sierra Club brings its anti-coal campaign to Spokane on Thursday, urging local residents to oppose terminals at Washington seaports that would ship coal to Asia.

Coal producers are seeking permits to build terminals near Bellingham and Longview to ship up to 130 million tons of coal mined in Montana’s and Wyoming’s Powder River Basin to China, India, Korea, and Japan.

The coal would reach Washington’s coast by rail. Communities along the route, including Spokane, could see dozens more trains loaded with coal rolling through their towns if the terminals are built, said Robin Everett, part of the Sierra Club’s “Beyond Coal” campaign.

(By Betsy Kramer, The Spokesman-Review)

On Wednesday, a dozen regional anti-megaload activists attended and provided oral testimony at the U.S. Army Corps of Engineers public hearing about the Port of Lewiston expansion application.  Please lend an ear to the Thursday, October 20, KRFP Evening Report between 11:03 and 9:16 for a brief summary of the arguments presented by opponents and proponents of the Port’s proposal to gravel a storage yard, move a mooring dolphin, and extend the dock into the Clearwater River, explicitly to accommodate larger shipments.  Because most of the public comments voiced at the Lewiston hearing supported Port expansion, your comments are crucial to requesting a full environmental impact statement, accompanying public involvement, and ultimate denial of this expensive and short-sighted project.  Please peruse the previous WIRT Port of Lewiston Permit Application Comments for writing prompts.  The Corps has received 140 written comments to date: let’s double that number with your expansion-denouncing input by Saturday, October 29, at midnight. 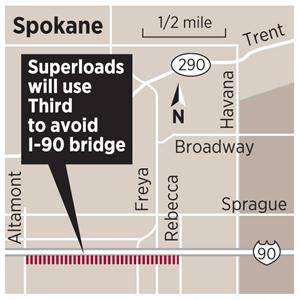 Unclear if 250 oversize loads are bound for Alberta oil project

A series of superloads coming through Spokane will travel down a portion of Third Avenue during the next several months because they don’t fit under a bridge over Interstate 90.

Residents along the affected stretch of Third received notices Oct. 11 from the city of Spokane Neighborhoods Services stating the loads would exit I-90 at Altamont Street and travel down Third for several blocks because they are too big to fit under the nearby pedestrian bridge. They will re-enter the interstate at Rebecca Street.

(By Chelsea Bannach, The Spokesman-Review)

The Walla Walla District of the U.S. Army Corps of Engineers will conduct a public hearing on October 19, 2011, to solicit addition information concerning the Port of Lewiston NWW-2010-00213 application to expand its existing facilities.  The proposed port actions could accommodate megaload shipments and require the Corps’ verification and authorization for work in federal waters, lands, and flood control structures (Lewiston levees).  Registration to comment and an informational open house hosted by Corps representatives begin at 6 pm, before the 7 pm hearing at Sacajawea Junior High School, 3610 Twelfth Street in Lewiston.

The Corps will record the hearing and report verbatim all written and oral comments at the meeting, for inclusion in the official public record.  Besides speaking out on Wednesday against this unnecessary development venture, please send your remarks to the Corps by the end of the extended public comment period on October 29, 2011.  For further information about public hearing procedures, comment submission addresses, and the port expansion project, see the Corps’ News Release and its Notice of Public Hearing.  Call Friends of the Clearwater at 208-882-9755 to carpool from downtown Moscow at 5:30 pm.

ExxonMobil’s strategy of paring down some of its mega-loads and shipping them up through Idaho’s panhandle may end up costing the oil conglomerate a bit more than expected.

The City of Moscow already announced its plans to bill the company hauling the oversized rigs for costs associated with escorting the loads.  And now Latah County Sheriff Wayne Rausch says he wants to bill for his department’s overtime costs.

For the last several weeks I have watched the megaloads roll through Moscow, not just as a protestor, but as a resident whose front yard has suddenly become a parking lot for giant, environmentally destructive, earth-raping equipment.

I am absolutely appalled by the complete lack of safety exhibited on behalf of Mammoet and the Idaho State Police. Every week I see pilot cars screaming down U.S. Highway 95 with no regard to the posted speed limit of 35 miles per hour and without using turn signals, which help pedestrians like myself understand when it is safe to cross the street. Furthermore, and much more importantly, the Mammoet flaggers seem to have no training in regards to directing traffic. END_OF_DOCUMENT_TOKEN_TO_BE_REPLACED

A Moscow man says he and a friend were wrongfully arrested and charged late Thursday night for allegedly obstructing law enforcement by riding their bicycles on North Main Street ahead of three overlegal Imperial Oil/ExxonMobil loads.

Zachary E. Johnson, 33, said he probably plans to the fight accusations in court.

He said he was part of a Critical Mass bike ride earlier Thursday night prior to shipments passing through the city. Critical Mass of Moscow is described on its Facebook page as a group that opposes the fossil fuel industry and promotes cycling and will do so to assert their right to access roadways. END_OF_DOCUMENT_TOKEN_TO_BE_REPLACED

An Imperial Oil megaload passes under the highway sign at the split between U.S. Highway 95 and U.S. Highway 12 (The Lewiston Tribune/Kyle Mills photo).

MOSCOW – More megaloads are scheduled to pass through here tonight and more protests are expected.

Meanwhile, the genesis, status, and future of demonstrations appears to be more a product of spontaneity than planning.

Helen Yost, spokeswoman for Wild Idaho Rising Tide, likened her group’s organizing efforts to “throwing a party.” Those attending protests, she said, are people with deep concerns and the right to express themselves according to individual conscience. END_OF_DOCUMENT_TOKEN_TO_BE_REPLACED

The megaloads keep rolling through Moscow. The Idaho Transportation Department, with the support of the Moscow City Council, is allowing our roads to be used as a supply route for the biggest industrial polluter in North America, ExxonMobil’s Alberta Tar Sands development. This industrial nightmare is a major contributor to climate change, it is polluting our planet, poisoning the people of Alberta and contributing to the creation of disasters that will kill untold numbers of people around the world. While the Moscow City Council debates how to mitigate the expense of protecting the ExxonMobil shipments from the justified rage of protesters, citizens on our highways are endangered. END_OF_DOCUMENT_TOKEN_TO_BE_REPLACED