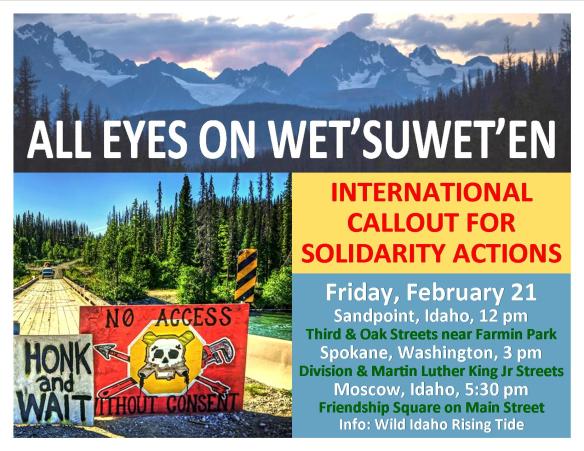 Sandpoint, Idaho (Kalispel Territory): 12 pm on the southwest corner of North Third Avenue and Oak Street, across from the Farmin Park clock, with the weekly, 350 Sandpoint Climate Strike action

Fossil fuels extraction and transportation onslaughts continue to use public police for private profit, invade indigenous, private, and public lands, and criminalize defenders of healthy waters, climate, lands, and life ways.  A British Columbia (B.C.) Supreme Court injunction granted in December 2019 seeks to block Wet’suwet’en people from their unceded, traditional territories in west central B.C., by establishing a tribal and public exclusion zone easing Coastal GasLink (CGL) access to its pipeline construction and work camp sites within the zone [1, 2].  Under Wet’suwet’en law, the hereditary chiefs of all five clans have unanimously opposed the fracked gas project and all pipeline proposals, and have not provided their free, prior, and informed consent [3].  They closed the West Morice Road, and in early January, evicted the company from their lands, where “Coastal GasLink was building a work camp to house up to 400 people,” about 20 kilometers beyond the Unist’ot’en Healing Center at kilometer 66 [1].  Wet’suwet’en chiefs have criticized Royal Canadian Mounted Police (RCMP) for arbitrarily expanding the exclusion zone and moving their checkpoint closer to Highway 16.

With an office in Spokane, TC Energy (formerly TransCanada) owns the Keystone tar sands pipeline that has leaked numerous times across the Great Plains and the Gas Transmission Northwest pipeline that runs from western Canada through north Idaho and eastern Washington.  The company is proposing the Keystone XL pipeline across Montana, South Dakota, and Nebraska, and is building the $6.6-billion Coastal GasLink pipeline from northeastern B.C. to a coastal, liquefied natural gas (LNG) plant in Kitimat, B.C.

Amid rising tensions during the first week of February, RCMP attempted to enforce the injunction and allow Coastal GasLink to resume work.  On Thursday, February 6, militarized police launched a pre-dawn raid on the first Wet’suwet’en camp at kilometer 39 of the Morice Road [4].  They detained journalists, arrested six land defenders and their supporters at gunpoint, but later released them without charges, and dismantled the camp.  With rifles, vehicles, and helicopters on Friday, February 7, tactical squad members invaded the Gidimt’en clan camp at kilometer 44 on the road, eventually arresting four people, while others refused to leave and remained in a cabin, and police towed their vehicles.  On Saturday, February 8, RCMP arrested another 11 community members, who had barricaded and chained themselves inside the Gidimt’en checkpoint warming center.  Police have accused Wet’suwet’en of placing two blockades and spikes in the road, to deter and damage vehicles, and cutting support beams of the kilometer 44 bridge, damaged by RCMP pulling down the metal, bridge gate with trucks.

Also on Saturday, two helicopters reached the last of three Wet’suwet’en, pipeline opponent strongholds, with police ready to evict the residents of the Unist’ot’en Healing Center.  The activists had built a large fire blockade on the snowy, Morice River bridge, and had strung dozens of red dresses along it and the road, symbolizing the violence against indigenous communities that transient, resource extraction “man camps” increase.  Among legal observers at the camp gate, they donned regalia, engaged in songs and ceremony to save the waters and lands for all humans, rang bells to summon ancestors, named missing and murdered, indigenous women and girls, and burned a copy of the injunction.  Unist’ot’en clan spokesperson and healing center director Freda Huson refused to talk with RCMP before they left the scene.  On Monday, February 10, police invaded the Unist’ot’en camp with dogs, vehicles, and helicopters, and arrested and removed Wet’suwet’en matriarchs, including Freda, while in ceremony [5, 6]. END_OF_DOCUMENT_TOKEN_TO_BE_REPLACED

In Bonners Ferry and Sandpoint of the Idaho Panhandle, dozens more defenders of railroads and the January 1, Burlington Northern Santa Fe (BNSF) Railway locomotive derailment, 2,000-gallon diesel spill, disassembly, and removal in the Kootenai River showed up than north Idaho water protectors, at the Fossil Fuels Train Pollution Protest held by WIRT on February 1.  The majority are apparently willing to support railroad operations, wrecks, and infrastructure expansions that spill hazardous materials into rivers, and to counter-protest concerned activists at WIRT demonstrations on the fossil fuels frontlines of air, climate, and water quality sacrifice zones.  See the WIRT website and facebook pages for photos and descriptions of these event outcomes [4, 5].

Backbone Campaign community supported organizer, friend, and fellow activist Jacob Johns, who participated in indigenous talks and demonstrations at the United Nations Climate Change Conference (COP25) in Madrid, Spain, during December 2019, is hosting three public, inland Northwest talks about worldwide, indigenous efforts to protect approximately eighty percent of Earth’s biodiversity.  Only five percent of humanity identifies as indigenous, but as globalization spreads, governments and corporations continue to work together to exploit biodiversity for profit and attack indigenous communities, through genocide, colonization, and greenwashing.  Jacob’s presentation will show compiled photos and videos, and amplify often unheard, frontline voices and stories.  He will also offer an indigenous organizing model, aimed at helping people to act in solidarity and co-create a livable future, and a closing, question-and-answer discussion.  Please join Jacob and WIRT activists for these informative events:

The WIRT climate activist collective welcomes opportunities to involve you and the regional, environmental and indigenous community in critical issues, as we together relentlessly confront the fossil fuel causes of climate chaos, through frontline actions and solutions.  WIRT organizers invite you to participate in potluck gatherings that include climate action films and conversations planning tactics, strategies, and activities, starting at 6 pm on the first and third Thursdays of every month, respectively in Moscow and Sandpoint [9].  Due to winter travel conditions, WIRT is not holding Moscow meetings during January and February 2020, at The Attic, up the back stairs of 314 East Second Street.  But at the next Sandpoint meeting on Thursday, February 20, at the Gardenia Center, 400 Church Street, we encourage you to offer your unique advice and assistance in arranging the Ninth Annual WIRT Celebrations in Moscow and Sandpoint at 7 pm on Friday, March 28, and Saturday, April 4, #No2ndBridge attorney search, litigation, and petition signature gathering and delivery at state and federal agency offices,  documentary and panel presentations, direct actions and training workshops, and public outreach.  For updates and articles on ongoing and emerging, Northwest and North American, fossil fuels issues, please check WIRT website and especially facebook pages, listen to WIRT’s weekly radio program, and sign the Petition to Deny and Revoke Permits for the BNSF Sandpoint Junction Connector Project [10]. END_OF_DOCUMENT_TOKEN_TO_BE_REPLACED

Thanks to everyone who attempted and/or considered participation in the Fossil Fuels Train Pollution Protest on Saturday, February 1 [1, 2]!  Wild Idaho Rising Tide (WIRT), #No2ndBridge, and regional climate activists hosted a brief, information-sharing rally and carpool at 10 am at the City Beach Park pavilion in Sandpoint, and a planned march at 11 am from the Gateway Visitors Center in Bonners Ferry, with a return to Sandpoint by 1 pm.  The gatherings in Bonner and Boundary counties raised resistance to fossil fuels and hazardous materials train pollution and risks to public and environmental health and safety, and to ongoing railroad disasters and infrastructure expansions increasing these threats, such as the rockslide derailment, 2,000-gallon diesel leak, and removal of two Burlington Northern Santa Fe (BNSF) Railway locomotives in the Kootenai River, and BNSF proposals to double tracks and rail bridges across Sandpoint, Sand Creek, and almost one mile over Lake Pend Oreille.  On BNSF’s Bakken crude oil pipeline-on-rails route across western Montana and north Idaho, both the Kootenai River wreck and the July 1989, tank cars spill of 20,000-plus gallons of still residual diesel into Whitefish Lake serve as warnings that confirm that ALL trains impose inherent hazards along and over water bodies [3].

WIRT activists appreciate Rising Tide North America friends, who shared the WIRT media release about the event on their website, and Sandpoint Reader staff, who printed the protest alert (without “Info: WildIdahoRisingTide.org”) in the event-ful calendar on the center pages of the January 30, 2020 issue [4, 5].  WIRT activists are also grateful for Keokee Publishing administrators, who listed the event among Civic Happenings in Sandpoint, one of the Sandpoint Online calendars, and for Kootenai Valley Times editors, who also published our full event announcement and Kootenai River railroad incident coverage [6, 7].  This online news outlet in Bonners Ferry additionally linked the article through a facebook post that received a handful of shares and over 100 mostly derogatory comments [8].

During the week before the protest, besides posting event flyers and sending notices by email, website, facebook, and radio program, WIRT contacted a few core activists and almost 200 Sandpoint and Spokane friends.  We started conversations with everyone who had expressed interest in the event, to explore responses and ideas and to organize participation and carpools in advance, among activists from the Bonners Ferry, Sandpoint, Spokane, and Moscow areas.  Seeking to ensure that at least a few people, especially those with current, transportation obstacles, show up at both protest locations, we offered to provide gas funds for carpoolers who need them, despite WIRT’s poverty.

On Saturday morning, February 1, Sandpoint experienced intense, southwest winds of 20 to 30 miles per hour (mph) and gusts reaching 45 mph, while Fossil Fuels Train Pollution Protest participants gathered inside the open, City Beach Park, picnic pavilion beside Lake Pend Oreille [9].  Known as “snow eaters,” these warm, dry, fast-moving, Chinook winds could vaporize a foot of snow within hours, before it had a chance to melt [10].  Under such breezy conditions, WIRT activists could not display the unwieldy signs and large banners that we brought for the event.  Potential participants either chose not to attend, due to the high wind advisory, or may have driven nearby without noticing the rally or getting out of the dozen vehicles that we saw circle past the pavilion.  For an hour, only bicyclists and pedestrians without vehicles braved the weather and waited against the ferocious winds, for others to arrive at the park. END_OF_DOCUMENT_TOKEN_TO_BE_REPLACED