“Monstrous machines over wild and scenic Idaho and Montana highways could destroy the wilderness and roads. … To block Exxon in this deal is to start breaking chains.  This Exxon tar sands obscenity is a prime example of all that is tyrannical and evil in our sick, dead system.  Join us, fight the power, if not for the land, for the water, for the world you live in, then for yourself, because this is the first battle in the fight to free us all…”

Winona LaDuke, noted Native American activist and author, speaking recently at the Native American Center at Portland State University.  Winona spoke for about half an hour about the Alberta tar sands and also about the large oil extraction equipment being shipped from South Korea through Portland and along narrow highways though Idaho and Montana.  (www.honorearth.org/stop-tar-sands)

Photos from the citizens’ march against the heavy-haul in Moscow, Idaho.

Thanks to everyone who helped to make this possible. The turnout was inspiring to say the least. Keep up the fight everyone! 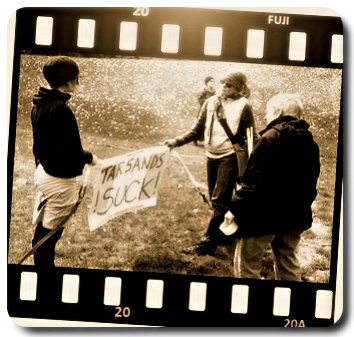 University of Idaho students and regional activists with Wild Idaho Rising Tide marched across the UI campus in Moscow at midday on April 20th to display their opposition to the ExxonMobil transports planned for Idaho roads and bound for Alberta tar sands development. As part of the international Day of Action Against Extraction, north central Idahoans joined thousands of climate justice activists marking the anniversary of the BP oil disaster in the Gulf of Mexico with public demonstrations and direct actions.

In solidarity with communities and ecosystems devastated by corporate extraction of fossil fuels and public natural resources, the dozen protesters carried signs saying, “Stop the Megaloads” and “Big Oil Has the Right-of-Way.” Their banners were strung on ropes between them that illustrated the 208-foot length and 24-foot width of the colossal oil company megaloads that could travel Highways 12 and 95.

Student members of the UI Oxfam and Environmental clubs, Corrie Ellis and Danie Merriman, said, “We feel we are representing university and Moscow students, and we are not O.K. with big business running over our town and us not having a voice in this matter. We are ready to be heard.”

Lee Spencer, a fisherman against tar sands exploitation, noted that, “My family and I have fished and lived on the Lochsa River for generations. It is a sacred place. It is not a corridor to facilitate the destruction of Alberta and the entire biosphere.”

The newly formed group is planning another march and rally on May 11th, when the Idaho Transportation Department and Imperial Oil, a subsidiary of ExxonMobil, will hold an interactive public meeting in Moscow. Many citizens and city officials have expressed concerns about the dozens of oversized shipments the oil company has proposed to move on Highway 95 through Moscow.

A quick look at what’s going on in our region:

A march to protest the proposed transport of oversized oil equipment on U.S. Highway 95 will start at 5:30 TONIGHT at the Eggan Youth Center, 1515 East D Street, Moscow.  The march will conclude with delivery of a regional anti-megaloads petition and participant letters to the Idaho Transportation Department at a public meeting at 7 p.m. at the Hamilton Indoor Recreation Center, 1724 East F Street, Moscow.

Talk will focus on how loads may affect emergency personnel, public works

The city of Moscow will host a roundtable discussion at 11 a.m. Thursday in the Moscow City Council Chambers on the technical aspects of Imperial Oil/Exxon Mobil’s proposed plan to transport oversized oil refinery equipment through Moscow and Latah County on U.S. Highway 95.

The city has arranged for ExxonMobil/Imperial Oil Project Manager Ken Johnson and representatives from the Idaho Transportation Department (ITD) to discuss the elements of the proposed loads as they relate primarily to law enforcement, emergency medical services, and public works.

The city is working to document stakeholder concerns and assist in facilitating the ability to address concerns regarding the possible transport of oversized loads on Highway 95.

Members of the Moscow Police Department, the Public Works Department, and the City Council will attend.

Representatives from the Latah County Sheriff’s office, Idaho State Police, post office, and chamber of commerce as well as from Gritman Medical Center have been invited to attend. END_OF_DOCUMENT_TOKEN_TO_BE_REPLACED

Members of Wild Idaho Rising Tide (WIRT) and area residents will gather at 5:30 p.m. Wednesday on the grounds of the Eggan Youth Center, 1515 E. D Street in Moscow, for a march protesting the proposed transport of megaloads up U.S. Highway 95 through Moscow.  All are invited to join in this walking rally that will conclude with delivery of a regional petition and letters to the Idaho Transportation Department at a public meeting hosted by the City of Moscow 7 to 10 p.m. at the Hamilton Indoor Recreation Center, 1724 E. F Street in Moscow.

Wild Idaho Rising Tide is part of an international, grassroots network of groups and individuals working to promote local, community-based solutions to the climate crisis.  For information about WIRT or related citizen actions, email wild.idaho.rising.tide@gmail.com, go to wildidahorisingtide.org or facebook, or write P.O. Box 9817, Moscow, Idaho, 83843.

WIRT can also be found 8 a.m. to 1 p.m. most Saturdays from May to October at the Moscow Farmers Market in Friendship Square.

MOSCOW – Members of Wild Idaho Rising Tide and area residents will gather on the grounds of the Eggan Youth Center, 1515 East D Street in Moscow, for a march protesting megaloads at 5:30 p.m. Wednesday.

The public is invited to join in this walking rally, which will culminate with delivery of a regional anti-megaloads petition and participant letters to the Idaho Transportation Department at an interactive public meeting starting at 7 pm at the Hamilton Indoor Recreation Center, 1724 East F Street in Moscow.

More information is available on the website at Wild Idaho Rising Tide.

(By The Lewiston Tribune)

This video shows a ConocoPhillips megaload as it travels Highway 12 at night, along the Wild and Scenic Middle Fork of the Clearwater River in north central Idaho.  The Port of Lewiston, State of Idaho, ConocoPhillips, and Imperial Oil/ExxonMobil are working to convert Idaho’s stretch of U.S. Highway 12 from a beautiful Scenic Byway and All American Road to an industrial truck route for the transport of gargantuan loads of heavy equipment.  The oversize loads block the entire highway as they travel past the rural communities of Orofino, Kamiah, and Kooskia, plus other small towns along the route in Idaho and across Montana to Canadian tar sands operations.

Concerned citizens have been monitoring the activities of these massive shipments and have documented the chaotic nature of the Idaho Transportation Department’s traffic management practices and the risks to public safety, travel delays, and infrastructure damage created by these transports.