I couldn’t disagree more with the weekend Daily Newseditorial (Opinion, Aug. 27 & 28). Megaload protesters are fighting the right fight. If global warming isn’t stopped, it’s the end of this planet as we know it.

The editorial board thinks the protests should move to D.C., but the deck is stacked against people working for positive change there, too. After a week of arrests, National Public Radio has yet to do a story on those peaceful protests, and the White House hasn’t commented on them either. Even if the D.C. action proves productive, most people can’t afford to go there or risk days in jail. END_OF_DOCUMENT_TOKEN_TO_BE_REPLACED

This weekend’s editorial (Daily News, Aug. 27 & 28) about the megaload protests in Moscow is amazingly superficial for professed journalists. By removing all context, you trivialize the protest as a futile attempt to stop an oil company truck.

Of course, the protest was much more than that. It was a signal to all those who are passionately concerned about the Earth, our only home, that they are not alone in their passion or their concern. And it was a signal to those who are unaware of the brutal rape of Alberta, giant tar sands exploitation, that they have something to learn (search “tar sands action” on Facebook or “tar sands invasion” on Google). END_OF_DOCUMENT_TOKEN_TO_BE_REPLACED

In my June 7 column I predicted Moscow’s hippies would dig out their
“leather vests, put on their Birkenstocks and re-adjust their graying
ponytails” in response to the movement of ExxonMobil’s megaloads up U.S.
Highway 95. Now, imagine the belly laugh I enjoyed when I woke up Friday
morning and saw on DNews.com a photo, taken by Daily News photographer Dean Hare, of my exact prophecy.

END_OF_DOCUMENT_TOKEN_TO_BE_REPLACED

Two protesters of the Imperial Oil/ExxonMobil megaload that began its trip from Lewiston late Thursday were arrested outside Coeur d’Alene on U.S. Highway 95 while monitoring the shipment’s progress early Saturday morning.

Helen Yost said she and another woman had been part of a group that was monitoring the load early Saturday when they were arrested by an Idaho State Police trooper.

They were later charged with obstruction and failure to wear seatbelts. END_OF_DOCUMENT_TOKEN_TO_BE_REPLACED

ORIGINAL POST: Friday, August 26 Six people were arrested early today, protesting mega-loads as the huge rigs rolled through their Latah County community.  The six, members of Wild Idaho Rising Tide, took part in a larger protest which saw several people lie down in the middle of Washington Street in Moscow, as scaled-down ExxonMobil mega-loads rolled on Highway 95 toward Coeur d’Alene before heading east on I-90 and north to the Kearl Oil Sands Project in Alberta, Canada.

Three more protesters were arrested early Saturday in Coeur d’Alene as a megaload shipment of oil excavation equipment passed through the Lake City.

Law enforcement officers confirmed that the arrests were made by Idaho State Police, but the names were not released.

One woman taken into custody had refused to identify herself, officials said.

(By Mike Prager, The Spokesman-Review) 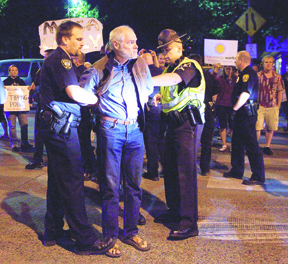 A member of the Moscow Police Department (left) and an Idaho State Police trooper arrest a protester Friday morning in Moscow.

They’ve already been released from jail

Six Moscow protestors were arrested after an Imperial Oil/ExxonMobil megaload was blocked early Friday at the intersection of U.S Highway 95/Washington Street and Third Street in Moscow.

All six face misdemeanor allegations of assembling to disturb the peace and refusal to disperse, Richardson said. END_OF_DOCUMENT_TOKEN_TO_BE_REPLACED

Idaho State Police troopers accompanying the 413,600-pound shipment from the Port of Lewiston were greeted by 50 to 200 protesters at the intersection of Third and Washington streets around 12:30 a.m., several sitting in the road with their signs and refusing to move. END_OF_DOCUMENT_TOKEN_TO_BE_REPLACED 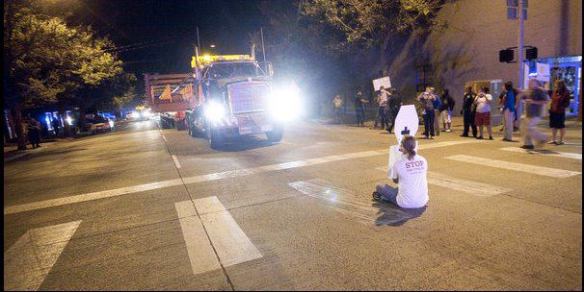 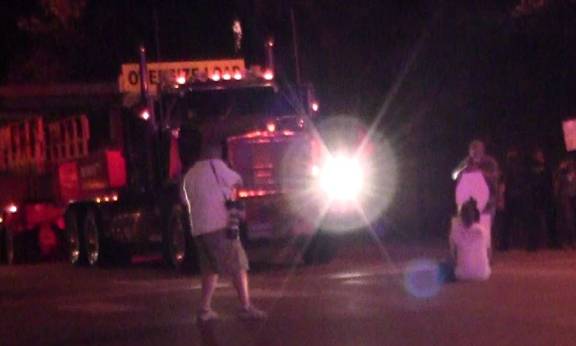 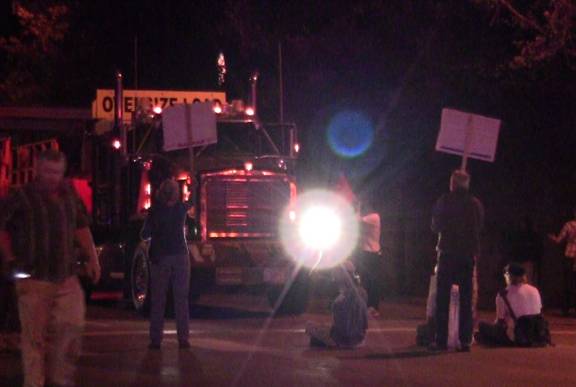 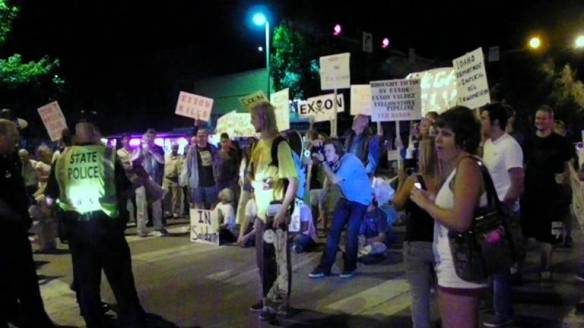 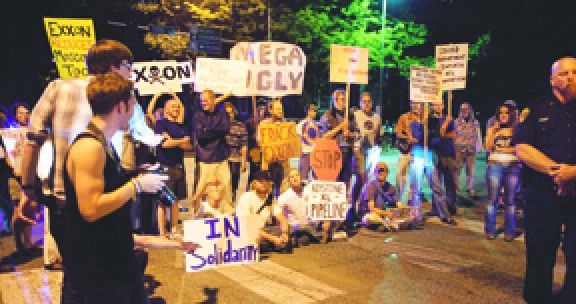 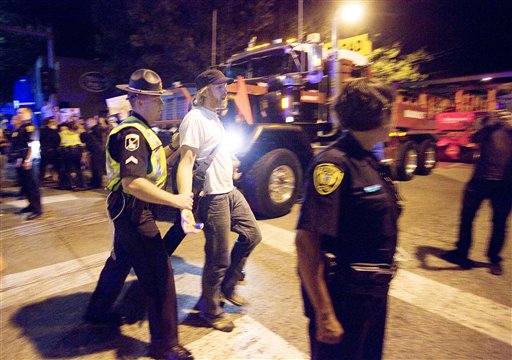 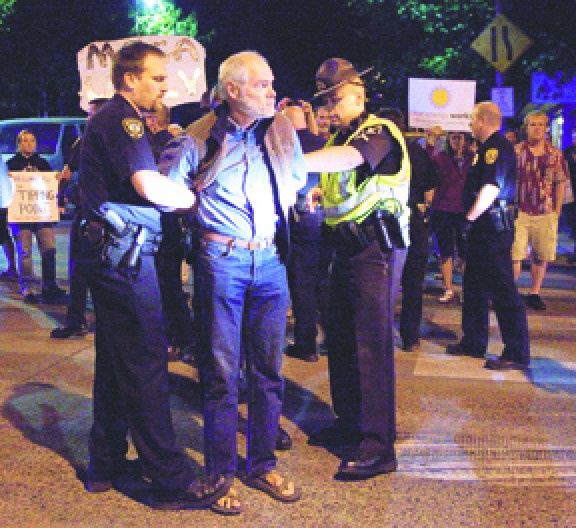 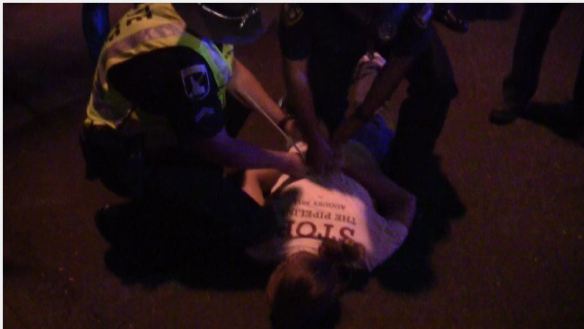 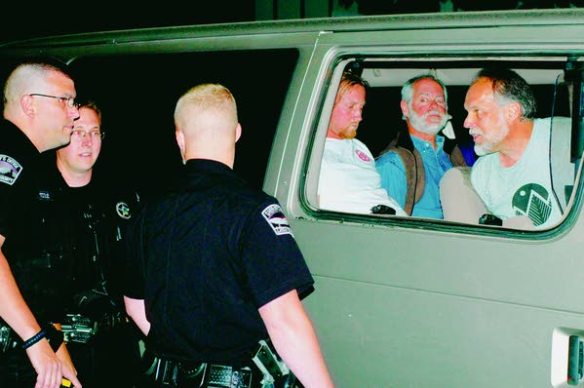 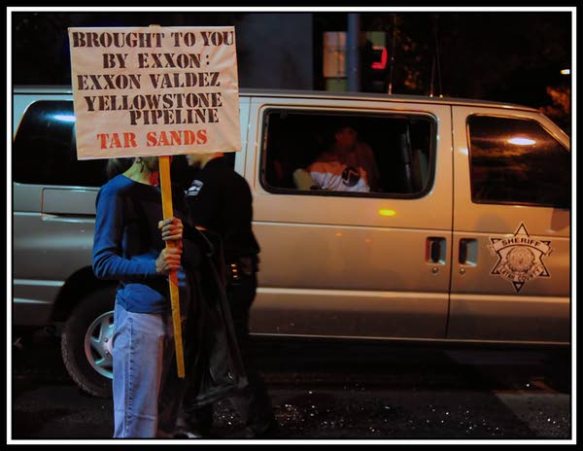 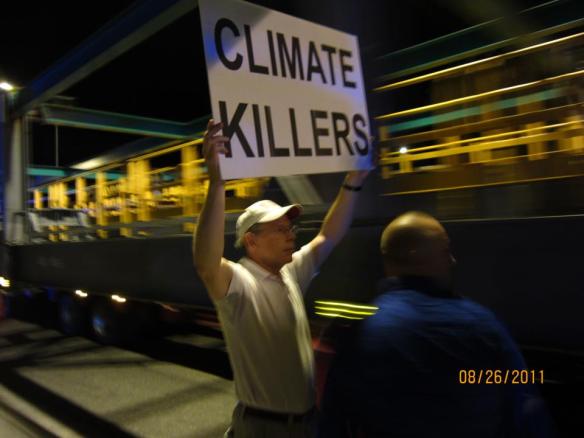 Idaho Protester: “I was on the street with a Flip video camera when 200-plus protesters met the first of the larger ‘megaloads’ moving through Moscow, Idaho, on their way to Alberta tar sands mining operations.  Brave people put their bodies on the line to blockade the convoy and its 400,000-pound load.  Six persons were arrested for repeatedly sitting, standing, or lying in the road in front of the behemoth.”