An oil sands water evaporator dressed like a giant spaceship spent Halloween in the parking lot of the Town Pump Truck Plaza in West Riverside.

Shutterbugs and employees and patrons from the River City Grill stopped throughout the day Wednesday to feast their eyes on the monster megaload destined for a Sunshine Oilsands facility in northeastern Alberta.

An Oregon moving company, Omega Morgan, is transporting the 265-ton vessel across Montana in five after-dark moves that started Monday night near Lolo Hot Springs.  It began its overland journey from the Port of Wilma in Washington ten days ago.

Sunshine Oilsands Ltd. in Calgary owns eight lease sites in the Fort McKay area, some 300 miles northeast of Edmonton in the massive Athabasca oil sands region.  It’s less than 30 miles from the Kearl Lake area, the destination of hundreds of loads of processing equipment shipped through Montana in the past year by Imperial Oil/ExxonMobil.

The oversized shipment spent close to seven days getting across the state of Idaho on U.S. Highway 12, including Friday evening and Saturday morning when travel was suspended because of snow.

Idaho Transportation Department (ITD) rules limit travel to between 10 p.m. and 5:30 a.m. when traffic is the lightest.  The rig, which takes up two lanes of traffic, departed from milepost 143 on Saturday and got to milepost 160 Sunday morning, two miles shy of Powell, said ITD spokesman Adam Rush at Boise.

A megaload carrying American-made water purification equipment has been stranded by snow on a remote spot on U.S. Highway 12.

The Idaho Transportation Department (ITD) announced Friday that the shipment wouldn’t move at least until this evening because of weather.

The extra-big rig was at milepost 143, 19 miles west of Powell, as of Friday morning.  It was originally scheduled to reach Montana by that time.

The chance of snow was listed as 100 percent at Powell for Friday evening, according to the National Weather Service.

Plans for the remainder of the weekend were fluid, according to ITD. END_OF_DOCUMENT_TOKEN_TO_BE_REPLACED

Stand Up! Fight Back! Against Big Coal in the Northwest: An information sharing, brainstorming, and direct action planning event in Spokane, Washington

Some of the biggest coal companies in the world plan to strip-mine more Montana and Wyoming prairie and transport coal on 50-plus trains per day through Montana’s largest towns, around remote northern Idaho lakes, through eastern Washington river valleys, to ports on the coasts of Oregon and Washington, en route to China.  In their quest for huge corporate profits from these exports, the coal and rail industries disregard their multiple impacts on regional residents and businesses, our quality of life, and our beautiful Pacific and Inland Northwest.

What do communities do when our environment is attacked?  STAND UP!  FIGHT BACK!

Please join activists from Bellingham, Missoula, Moscow, northern Idaho, Portland, Seattle, and Spokane on Saturday, November 3, in Spokane, Washington, as we share experiences, brainstorm, and develop strategies to protect our health and environment by standing up and fighting back against Big Coal.  This event hosted by Occupy Spokane and Wild Idaho Rising Tide for concerned citizens throughout the region and facebook groups Cascadians Against Coal, Coal Port Resistance Solidarity Network, Free Cascadia!, and Stand Up Fight Back Against Big Coal in the Northwest offers breakfast at 10:00 am, introductions at 11:00 am, and an inspiring day of discussions and presentations at 1824 E. Sprague Avenue, formerly the Rainbow Tavern.

For accommodations, further information, or to RSVP, contact the Occupy Spokane Clubhouse at 509-535-4040 or ocspch@gmail.com and join the facebook group Stand Up Fight Back Against Big Coal in the Northwest at https://www.facebook.com/groups/369381406473710/.  Spread the word about this gathering!

Load set to be in Kooskia on Wednesday

An over-legal shipment will be traveling along U.S. Highway 12 through Idaho County, tentatively set to cross the border into Montana late Thursday night or early Friday morning.

And activists opposing the shipment won’t be far behind.

On Monday, October 22, at about 11 pm, Omega Morgan moved a cylindrical water treatment module bound for Sunshine Oilsands bitumen extraction/production operations near Fort McMurray, Alberta, through Lewiston, Idaho.  Manufactured in the Portland, Oregon, area, the 236-foot-long, half-million-pound piece of equipment was barged up the Columbia and Snake Rivers to the Port of Wilma near Clarkston, Washington.  Dedicated Wild Idaho Rising Tide (WIRT) activists confronted this first and longest tar sands megaload to cross Idaho and Montana via the Highway 12 wild and scenic river corridor, through the largest wildlands complex in the lower 48 states, and up the Blackfoot River valley and Rocky Mountain Front.  Just a few miles into its historic 1000-mile-plus journey to its Canadian destination, WIRT demonstrated resistance near the Lewiston, Idaho, intersection of Idaho Highway 128 and U.S. Highways 12/95.  There Omega Morgan workers dwarfed by the overlegal-size shipment adjusted transport trailer wheels that separate into independent sections to guide the load between front and rear trucks through road curves.  In the third video segment, megaload monitors captured the behemoth squeezing past a Highway 12/95 sign in north Lewiston, followed by its convoy of pilot trucks, flagging teams, portable signs, and an ambulance, the latter included to assuage citizen concerns over megaload blockage of emergency services on narrow and sinuous upriver Highway 12.  For the second part of this film, see the YouTube video Omega Morgan Megaload 10-22&23-12.

More footage of the Monday, October 22, passage of an Alberta tar sands water treatment vessel and accompanying convoy in Lewiston, Idaho, as it heads eastward along Highway 12/95.  From the Port of Wilma, Washington, gateway through one of America’s greatest wilderness waterways, the Lochsa/Clearwater river corridor coveted by oil companies as a potential industrial route to the Canadian tar sands region, Wild Idaho Rising Tide (WIRT) monitors followed, videotaped, and documented Omega Morgan transport movements over two nights.  Traveling only 45 miles on its first, easiest night, the megaload encountered WIRT protesters near the Port of Lewiston (see the YouTube video Omega Morgan Megaload 10-22-12), before sliding past the former Flying J gas station on the Highway 12/95 frontage road.  WIRT activists walked along the nearby Clearwater River pedestrian/bike path to witness another megaload pinch point where the frontage road joins the highway.  In the third video segment filmed at the junction of Highways 12 and 95, the convoy traveled east in the westbound lanes to avoid a low underpass.  Monitors documented its wrong-way incursion while conversing with an Idaho state trooper, who revised the 15-minute traffic clearance requirement of the transport to disqualify the watchful monitors.  The fourth video segment illustrates dangerously rapid megaload travel over the Arrow Bridge spanning the Clearwater River, with both the front and rear trucks attached and escort vehicles awaiting its precariously heavy crossing.  Finally, on Tuesday night, October 23, Omega Morgan personnel invited WIRT monitors to accompany the convoy within the river canyon between Orofino and Kamiah, Idaho, to avert the confusion of trailing vehicle drivers not passing when directed, like constantly shadowing rear monitors.  WIRT scrutinized 22 miles of convoy movements over three hours, noting half-paved highway sections, durations of convoy stops, highway traffic volumes, and the speeds between 5 and 25 miles per hour and locations of the megaload traversing the Nez Perce Reservation.  The transport permitted by the Idaho Transportation Department temporarily stopped mid-street in downtown Kamiah, before resuming its road- and climate-wrecking assault and falling short of its second parking destination near Kooskia later that night.

The Thursday, October 25, 2012, KRFP Radio Free Moscow Evening Report, Mystery Megaload Slow, describes the circumstances of the half-million-pound module hauled by Omega Morgan across Idaho on Highway 12 and airs conversations among Wild Idaho Rising Tide activists while they monitor its convoy on Tuesday night, October 23-24.  Listen to between 14:05 and 4:02 of Megaload Owner Still Unknown for more information about the module and its Alberta tar sands destination.

A barge pushes Alberta tar sands water treatment equipment manufactured in the Portland, Oregon, area up the Columbia and Snake Rivers to the Port of Wilma near Lewiston, Idaho. 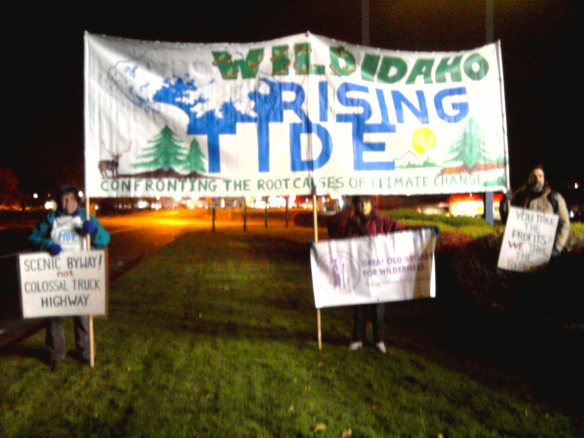