Supporters of climate justice, please hear this plea.  Citizens of Idaho find themselves now at the nexus of greed, environmental degradation, and genocide.  Our ethically challenged state department of transportation has permitted the North Idaho transport of dozens of ExxonMobil megaloads of death, bound for Alberta tar sands operations.  The massive carbon emissions that would result from this mining project represent a point of no return for the planet.  Here in Moscow, Idaho, vigilant protestors are taking a stand as these road-hogging weapons of mass destruction, launched from the Port of Lewiston, bash through town in the late evenings (every Thursday), accompanied by throngs of state, local, and federal law enforcement officers.

Frankly, we need some help here.  North Idaho is beautiful in the fall, the tamarack are turning gold, and the rivers are running clear.  On absolutely no authority whatsoever, I declare the month of October to be “North Idaho Eco-tourism Month.”  Come join the members of Wild Idaho Rising Tide (friend them on facebook), the Moscow Volunteer Peace Band, and other anti-tar sands activists as we converge in Moscow, Idaho, to speak out against our unwilling participation in this immoral exploitation of the planet and its people.

There is an expectation among Daily News readers that op-ed pieces will meet minimum standards of civility and respect. We also expect some intent to enlighten and inform. Henry Johnston’s piece on megaload protesters (His View, August 30) met neither expectation. When Doyle McClure wrote to complain (Letters, September 3-4), Michael O’Neal weighed in with charges of censorship (His View, September 7). END_OF_DOCUMENT_TOKEN_TO_BE_REPLACED

The back of a huge, two-lane-wide, Imperial Oil "blue box" passes by the Corner Club (David Hall photo). 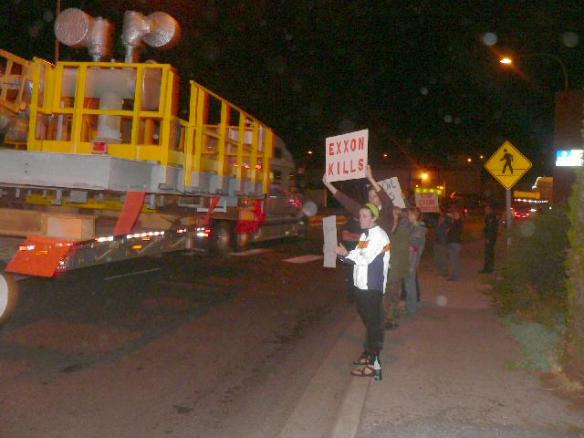 As many as 100 demonstrators lined a two-block section of downtown Moscow on Washington Street Thursday night to protest or support a convoy of two Imperial Oil shipments headed for Canada.

The demonstrators, the vast majority of whom opposed the loads, were warned early on by Moscow police that they would be arrested if they tried to impede the loads.

The two megaloads passed through Moscow at about 10:30 pm without incident – other than garnering a few shouts from both protesters and supporters. END_OF_DOCUMENT_TOKEN_TO_BE_REPLACED

PASCO — A potentially deadly spider infestation at the Port of Pasco is affecting the massive loads in storage there.

The state says 20 workers called the Washington State Department of Labor and Industries to report the problem.  KIEWIT is managing the project and had to shut it down for now after people saw brown recluse, black widows, and spiders that aren’t even on this poster.

An exterminator was called in and is investigating how to get rid of the spiders.  The infestation may include spiders that aren’t native to the U.S., since the megaloads came here from Korea.

I am responding to Henry Johnston’s His View column (Opinion, August 30) and his disapproval of those who exercised civil disobedience over the megaloads coming through Moscow.

Johnston, I’m not a hippie and certainly don’t smoke pot. The 1960s ended 40 years ago when I was 5. I am conservative.

If I get arrested, I will do so because of my grave concern about climate change. END_OF_DOCUMENT_TOKEN_TO_BE_REPLACED

I am writing in response to your weekend editorial, “Protesters fighting the wrong fight in Moscow,” (Daily News, August 27-28) and Henry D. Johnston’s column, “An asinine exercise in pure stupidity,” (Daily News, August 30) regarding local megaload protests: Both writers are incredibly misinformed, naive and/or disingenuous to think these local protests were ever only about the use of heavy trucks on Idaho roads.

And had Johnston attended the protests, in addition to “hippies,” he would have seen children, families, college students and faculty, and various other community members. Both writers demonstrate an alarmingly narrow understanding of the megaloads and Alberta Tar Sands issues. The only issue Idaho residents were allowed to argue in court is the use of Idaho roads by trucks bound for the Tar Sands. The moral and ethical issues were not allowed in court. END_OF_DOCUMENT_TOKEN_TO_BE_REPLACED

Rising Tide’s action comes on the heels of the 2-week Tar Sands Action campaign in Washington DC. 1,253 American’s were arrested in an act of civil disobedience at the White House to send a message to President Obama, asking him to stand up to Big Oil and deny the Keystone XL tar sands pipeline permits.” 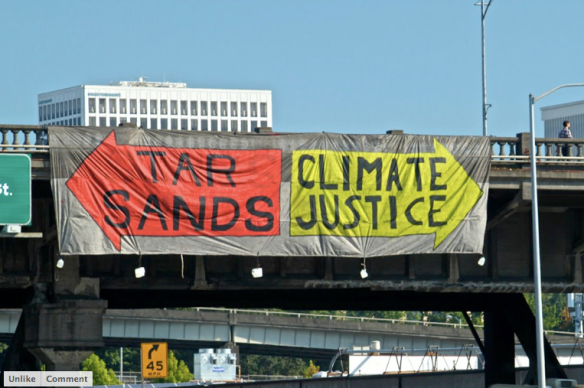 “The Keystone XL pipeline is required for Big Oil to profit off of the social and environmental disaster that is the Alberta tar sands. Current tar sands mining has brought increased cancer rates, polluted water, and mass die-offs of birds and fish in the largely First Nation communities of northern Alberta.

Tar Sands Action organizers have put a call out for activists to hold the date October 7th for further action. This is the final Congressional hearing on the Keystone XL pipeline. Regionally, people are encouraged to visit their local Obama 2012 headquarters and inform staffers that you will withhold your support in the upcoming presidential elections until the pipeline is stopped.”