Payette County Commissioners passed a gas and oil drilling ordinance after a public hearing on Monday at the courthouse.

They heard testimony from Payette County residents, who mostly said the ordinance needed to expand the setback from 200 feet in the new proposed ordinance to the 500 feet that it had been in the previous ordinance.

Several testified that a neighbor who signs a lease allowing drilling to be done on his or her property would force another neighbor to endure the drilling, despite their possible refusal to sign a lease.  They said that 200 feet is not an adequate distance.

New Plymouth resident Tina Fisher said that if one neighbor signs a lease but the other neighbor doesn’t want to, it is unfair to that neighbor.  “Two-hundred feet is woefully inadequate,” Fisher said. END_OF_DOCUMENT_TOKEN_TO_BE_REPLACED

At the request of the Idaho Transportation Department (ITD), the U.S. Forest Service is revising one of its interim criteria designed to define and govern the transport of megaloads through national forest land.

But the change won’t make it any easier for the massively oversized shipments to win approval for travel along U.S. Highway 12 as it passes through the Nez Perce-Clearwater National Forest and its Wild and Scenic River corridors.

The Forest Service is also asking to review megaload applications before permits are awarded by the state and is taking issue with the state’s insistence that it lacks authority to deny the permits.

In February, federal Judge B. Lynn Winmill ruled the Forest Service has authority to review megaload shipments that cross national forest land and pass through the Lochsa and Middle Fork of the Clearwater Wild and Scenic River corridor. END_OF_DOCUMENT_TOKEN_TO_BE_REPLACED

As oil and gas drilling resumed in Payette County this month after a few years, Alta Mesa Services raised a derrick at the Smoke Ranch natural gas well on June 9 [1].  This directionally drilled well – the focus of the intensive Stop the Frack Attack! campaign of Wild Idaho Rising Tide (WIRT) and Idaho Residents Against Gas Extraction (IRAGE) during June – embodies the myriad infringements of environmental and human health that conventionally-drilled and hydraulically-fractured (“fracked”) oil and gas wells famously impose [2].  The Smoke Ranch well occupies a floodplain, where operators pumped standing water from the well pad before drilling between the Payette River and Big Willow Creek, within a half-mile of a riparian area/wetland wildlife refuge, and only a few miles upstream from the City of Fruitland municipal water intake and the Payette/Snake River confluence.  Its ultimate outcomes could set a precedent for looming drilling/fracking on and under nearby state lands and waters already leased by Alta Mesa and Snake River Oil and Gas.  IRAGE activists have been monitoring the site daily and, along with other information sources in the southwest Idaho region, have observed multitudes of hidden equipment, transport trailers, drill pipes, and well pads awaiting likely escalating utilization, as well as water for Smoke Ranch operations withdrawn from irrigation canals.  They have recently taken unreleased pictures and videos of several Schlumberger tank trucks covered with radioactive warning placards. END_OF_DOCUMENT_TOKEN_TO_BE_REPLACED

Riddle us this, Batman: What does Omega Morgan know that everyone else does not?

The transportation company – at no small expense – navigated two megaloads of equipment manufactured by Ellett Industries up the Columbia and Snake rivers to the Port of Wilma – in anticipation of moving them up U.S. Highway 12 toward the Alberta tar sands.

Which, says Clearwater-Nez Perce National Forest Supervisor Rick Brazell, “is setting us up for a showdown.”

If anyone can see any flexibility in Brazell’s recent policy closing U.S. 12 to megaload traffic, please enlighten us.

His authority is rock solid.  It comes from U.S. District Judge B. Lynn Winmill.

So is Brazell’s mandate.  That flows through the National Wild and Scenic Rivers Act of 1968. END_OF_DOCUMENT_TOKEN_TO_BE_REPLACED

But in an early February ruling in response to an Idaho Rivers United lawsuit argued by Advocates for the West, U.S. District Judge B. Lynn Winmill of Boise upheld Forest Service (USFS) authority to review state approval of megaload shipments that would traverse the Nez Perce-Clearwater National Forest and the Lochsa/Middle Fork of the Clearwater Wild and Scenic River corridors [3].  In his June 17, 2013, letter to ITD, Forest Supervisor Rick Brazell suggested interim megaload definitions and USFS approval criteria: Oversized loads should not require traffic to be fully stopped, the roadway or adjacent vegetation to be physically modified, or take longer than 12 hours to cross forest/river lands [4]. END_OF_DOCUMENT_TOKEN_TO_BE_REPLACED 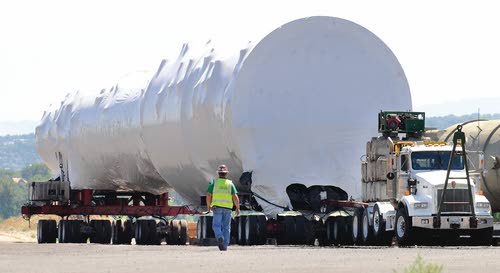 An evaporator sits idle at the Port of Wilma in Clarkston after arriving by barge. The equipment bound for Alberta will be used to recycle steam for processing tar sands (Lewiston Tribune/Kyle Mills photo).

Two megaloads sitting at the Port of Wilma are creating work for Americans and are destined to help an oil company conserve water.

The evaporators were manufactured by Ellett Industries near Vancouver, Canada, which purchased more than $2.5 million in American materials for the project, said Bob Gill, vice president of sales for the company.

American tug boat companies handled the shipments after they entered U.S. waters just south of Vancouver, and the equipment was barged up the Columbia and Snake rivers, Gill said.

The insulation for one of the evaporators is being installed at the Port of Wilma, Gill said, a task that will employ about ten people for two to three weeks. END_OF_DOCUMENT_TOKEN_TO_BE_REPLACED

Company may be going through Port of [Wilma] Whitman County; No permits issued yet

Permit or not, a megaload may be headed to the Port of Whitman County for eventual shipment over U.S. Highway 12.

Nez Perce-Clearwater National Forest Supervisor Rick Brazell said he has received dozens of emails with pictures of a barge laden with a pressure vessel making its way up the Columbia River.  He also spoke with Mark Rey, a former undersecretary of the U.S. Department of Agriculture who is working for Omega Morgan, and said the shipments will dock in Washington instead of Idaho.

“They are apparently coming, and they are coming into (the Port of Whitman County) and not Lewiston,” he said.

Two large cylindrical vessels were parked at the Port of Wilma Monday night, though it was unknown if they were megaloads awaiting transport.

The shipping company Omega Morgan wants to move as many as ten pressure vessels – equipment used to extract oil from the Canadian tar sands – from the port to a project area in Alberta.  But it would first need a permit from the Idaho Transportation Department to use the highway and approval from the Forest Service to pass through the Wild and Scenic River Corridor. END_OF_DOCUMENT_TOKEN_TO_BE_REPLACED

KRFP Radio Free Moscow interviews Fighting Goliath organizer Borg Hendrickson between 22:53 and 7:03 of the July 22, 2013, Evening Report, Omega Morgan Loads at Wilma.  Borg talks about the plans, impacts, and possible accidents of megaload owners and transporters seeking to transform the Highway 12 wild and scenic river corridor into an industrial route for Alberta tar sands equipment, and the looming showdown between hauler Omega Morgan, the Idaho Transportation Department, and the Forest Service and Nez Perce Tribe, over evaporators offloaded at the Port of Wilma on Monday, July 22.