A megaload that started from the Lewiston-Clarkston Valley on Wednesday and had been parked nine miles east of Lowell was expected to scale Lolo Pass late Friday night or early this morning.

A second super-sized rig could have also made progress toward Montana early this morning on U.S. Highway 12 in Idaho.  Its departure from six miles east of Lowell, where it arrived late Thursday night or early Friday morning, was dependent on how well the trip went for the rig ahead of it.  The second load left Lewiston on Thursday night. END_OF_DOCUMENT_TOKEN_TO_BE_REPLACED

A megaload was parked nine miles east of here on Thursday, awaiting the second leg of a journey on U.S. Highway 12 that started Wednesday.

Another extra-large rig was expected to enter Idaho after 10 pm on Thursday and travel an unspecified distance on U.S. Highway 12, said Adam Rush, a spokesman for the Idaho Transportation Department in Boise.

The load that left on Wednesday was likely not going to travel again on Thursday night, Rush said, weather conditions permitting. END_OF_DOCUMENT_TOKEN_TO_BE_REPLACED

Two more megaloads and their entourage of pilot and support vehicles will brave the winter highways from Lolo Pass and through Missoula early next week.

Duane Williams of the Montana Department of Transportation (MDT) said the oversized loads will probably start down U.S. Highway 12 from four miles east of the Idaho line late Monday night, unless weather delays their travel in Idaho.

They will stop at Bonner, then journey up Montana Highway 200 and over Rogers Pass on the next leg.  Mammoet, the contract hauler, is taking the ConocoPhillips evaporator vessels from Newberg, Oregon, to northern Alberta. END_OF_DOCUMENT_TOKEN_TO_BE_REPLACED

A megaload that left the Port of Wilma just west of Clarkston on Wednesday evening  is now parked nine miles east of Lowell on U.S. Highway 12 in Idaho.

It is not expected to travel again tonight with the distance depending on weather and road conditions, said Adam Rush, a spokesman for the Idaho Transportation Department in Boise.

(By Elaine Williams, The Lewiston Tribune)

Thanks to the difficult, ongoing, behind-the-scenes work of our allies who provided logistical information in December, Wild Idaho Rising Tide (WIRT) staged a great Idle No More solidarity rally on Sunday, January 27.  A few dozen WIRT activists bundled against the relatively mild Idaho/Washington winter, carpooled, and gathered at the Port of Wilma on the Snake River, expecting to encounter two Bantrel/ConocoPhillips tar sands megaloads offloading and staging in the port yards.  Instead, the haulers were late again and/or avoiding us, and we noticed only a few railroad workers, chip trucks, and scores of Canadian geese.  Nevertheless, we are outrageously proud of all of our heroes who foisted protest signs and the WIRT banner, marched, stood, chanted “Shut Down Tar Sands!”, and composed and sang revised lyrics to Down by the Riverside (“We’re gonna protest those megaloads…Down by the riverside…We’re gonna stand for a cleaner world… Ain’t gonna bow to greed no more!”).  Thanks to everyone who participated in showing our solidarity with indigenous allies opposing the devastation wrought by tar sands development across the continent.  View more photos of this demonstration in the WIRT facebook album
Idle No More World Day of Action Idaho Solidarity 1-27-13. 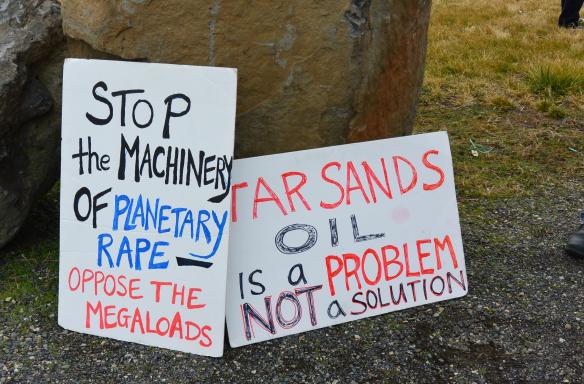 END_OF_DOCUMENT_TOKEN_TO_BE_REPLACED

[The contracted hauler Mammoet is transporting two ConocoPhillips wastewater evaporators manufactured in Newburg, Oregon, to northern Alberta tar sands operations via Highway 12 in Idaho starting Wednesday night, January 30.  Each megaload weighing 255,600 pounds and measuring 20 feet tall, 16 feet wide, and 141 feet long will depart the Port of Wilma, across the river from Clarkston, Washington, on separate nights and travel as far as possible toward the Montana border between 10 pm and 5:30 am, depending on road and weather conditions.  The Idaho Transportation has not announced when the second load will similarly ravage Nez Perce lands, the Middle Fork Clearwater/Lochsa wild and scenic river corridor, area highways, and traveler safety.  Two pilot vehicles and flagging teams will accompany both shipments and limit traffic delays to less than 15 minutes.

On Wednesday and successive evenings, January 30 and beyond, Wild Idaho Rising Tide (WIRT) monitoring and protesting carpools provisioned with video and still cameras, audio recorders, and notebooks will converge at 9 pm at the corner of Second and Washington Streets in Moscow, to demonstrate our megaload opposition at 10 pm along Idaho Highway 128 near Lewiston.  Citizen monitors will then follow each shipment to their stop-over point, likely near Kooskia, where they will park during the day.  Because Mammoet’s transportation plan prohibits these transports from delaying other highway vehicles for more than 15 minutes before pulling over to let traffic pass, we intend to also scrutinize their every move on their second nights traveling toward milepost 139 east of Lowell, and on their third nights in Idaho, struggling over the Bitterroot crest and the Idaho/Montana state line, toward the Lolo scale in Montana.  All of our plans are subject to the constantly changing dynamics of weather and terrain.  For more information and to RSVP as a megaload monitor and protester, contact Wild Idaho Rising Tide at wild.idaho.rising.tide@gmail.com, through facebook, at the WIRT Activist House between noon and 8 pm daily, and/or at 208-301-8039.] END_OF_DOCUMENT_TOKEN_TO_BE_REPLACED

Two megaloads will be traveling on U.S. Highway 12 in north central Idaho this week, creating traffic delays as long as 15 minutes.

The first is expected to leave the Port of Wilma just west of Clarkston at 10 pm today and travel an unspecified distance toward the Montana border, according to a news release issued by the Idaho Transportation Department in Boise.

The second rig will depart on a different day that has not been set, because it is dependent on the weather. END_OF_DOCUMENT_TOKEN_TO_BE_REPLACED