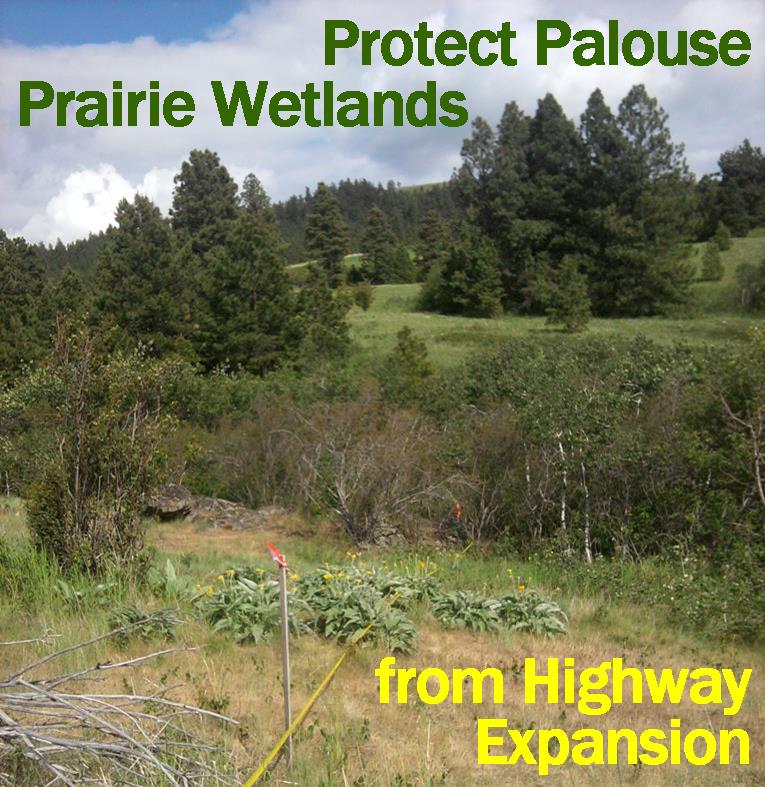 For the fourth time in 20 years, the Paradise Ridge Defense Coalition (PRDC) is challenging the Idaho Transportation Department (ITD) and now also the U.S. Army Corps of Engineers (Corps), in an ongoing citizen attempt to force selection of the least environmentally disruptive, central C-3 route for proposed U.S. Highway 95 realignment south of Moscow, Idaho.  PRDC filed a legal complaint in the U.S. District Court of Idaho on March 22, 2022, against the Thorn Creek Road to Moscow highway project.  This ITD scheme plans to reroute and expand to four lanes a six-mile segment of Highway 95, along the easternmost E-2 alternative route highest on Paradise Ridge.  The E-2 alignment would significantly impact some of the few remaining tracts of native Palouse Prairie and several critical wetlands.

PRDC disputes ITD’s assessment that the E-2 route would not destroy essential wetlands larger than the half-acre threshold of the Clean Water Act.  Smaller wetland sizes along E-2 would allow the project to proceed under a “nationwide” permit, with fewer restrictions and no further public input, while wetlands larger than a half-acre require the Corps to issue a more rigorous “individual” permit.  If PRDC can prove that some wetlands along the E-2 route each surpass a half-acre in size, ITD may be forced to stop commenced construction, re-apply to the Corps for an individual permit, and defend its preferred E-2 alternative as the “least environmentally damaging, practicable alternative” (LEDPA), which it is not.

After negotiations among opposing attorneys, the federal court let PRDC bring two wetlands scientists and a licensed surveyor into the E-2 right-of-way.  These experts found more than a half-acre of wetlands near the southern end of the project.  Subsequently, the ITD wetlands consultant sent back to the contested site confirmed the prior ITD determination.  Now, the Corps intends to study the area and decide whether the assessments of ITD, PRDC, or neither are correct.

On July 27, Wild Idaho Rising Tide (WIRT), a member organization of the PRDC coalition, launched a crowdfunding site for PRDC, to help cover the work of attorneys and experts that could cost up to $20,000, during this expensive phase of current litigation.  To win this federal case and protect native Palouse Prairie on Paradise Ridge from Highway 95 expansion, PRDC and WIRT are relying on contributions from concerned citizens and the regional community.

Please support these earnest efforts by generously donating soon toward the $4,000 target of this publicly transparent crowdfunding campaign on the GiveButter platform, or by mailing a check to PRDC.  You can further assist WIRT and PRDC reaching this goal by posting this crowdfunding page and PRDC website and facebook page updates to social media, sharing issue information and articles with your friends and family, and encouraging participation in giving to PRDC.  Thanks in advance for your gracious contributions!

On Tuesday, August 2, through Saturday, August 7, Kalispel and regional tribal members and the River Warrior Society are holding the annual Remember the Water canoe journey [1].  The paddle usually voyages between Qpqpe (Sandpoint, Idaho) and the Qlispe (Kalispel) Tribal Powwow Grounds, during the days before and beginning the yearly Kalispel Powwow and around the time of the Festival at Sandpoint music concerts.  Families and friends are again paddling over 35 miles in traditional, dugout, wooden and sturgeon nose canoes, through their home lands and waters in the tributaries, lake, and river of the Pend Oreille watershed.  While oil and gas pipeline expansions and fossil fuels pipeline-on-rails infrastructure and transportation impose and risk further harms to indigenous people and places across Turtle Island (North America), Native neighbors continue to revive, uphold, and practice their ancient cultures and sustainable ways, through admirable endeavors like this canoe journey and culminating powwow.

Paddle organizers encourage observers and participants to share this joyful cultural resurgence at various route locations.  Like during previous years, and as depicted in linked photos and articles about prior journeys, Wild Idaho Rising Tide (WIRT) activists and area groups plan to welcome the paddlers at Sandpoint, during their arrival on Wednesday evening and departure on Thursday morning, August 3 and 4 [2-11].  The canoe journey tentatively begins with a Tuesday evening, August 2, meeting at the Kalispel Powwow Grounds, initially launches on the Pack River on Wednesday, August 4, and re-starts from Sandpoint City Beach Park on Thursday morning, August 5, ultimately reaching its destination of the Kalispel Village on Saturday, August 7.  Please see the enclosed itinerary, join WIRT in supporting this adventure, and contact Nathan Piengkham via facebook and/or respond to WIRT, for further information, logistics, and ways to help. END_OF_DOCUMENT_TOKEN_TO_BE_REPLACED