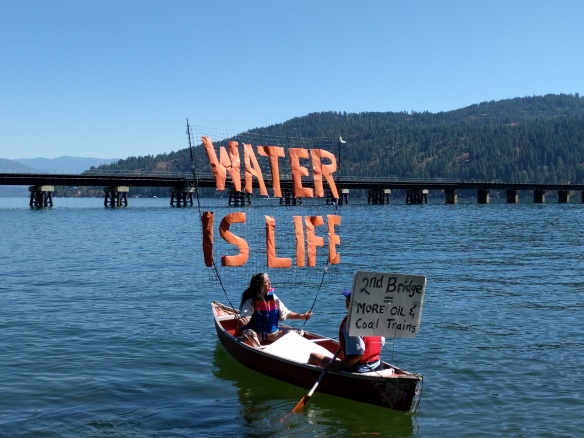 Thanks to each and all of the grassroots activists who converged from across the country, for third, annual, Panhandle Paddle activities co-hosted by Wild Idaho Rising Tide (WIRT) and allies, on August 25 to 27 in Sandpoint, Idaho. Participants discussed, trained for, planned, and staged resistance to Alberta tar sands, Bakken shale oil, and Powder River Basin coal trains and terminals that have caused wrecks, fires, spills, and pollution throughout the Northwest, from the Clark Fork upriver town of Heron, Montana, to the Columbia River Gorge village of Mosier, Oregon, and dozens of other locations.  Their enthusiastic involvement shows that Northwest residents will continue to protest fossil fuel and railroad industry proposals of new and expanded infrastructure, like north Idaho, double track construction and a second, Lake Pend Oreille, rail bridge.  After seven Idaho and Montana train derailments and collisions, two deadly, in seven months within 43 miles of Sandpoint, concerned citizens are rising up against coal and oil train traffic that recklessly endangers the health and safety of Northwest communities, environments, and the global climate. END_OF_DOCUMENT_TOKEN_TO_BE_REPLACED