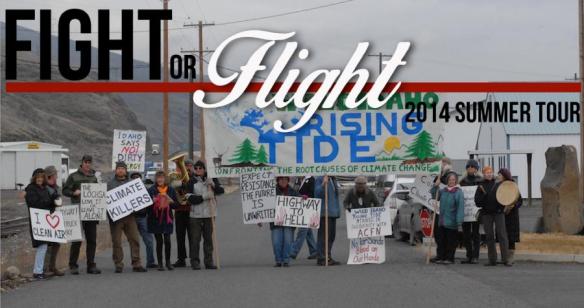 Why let Big Oil, Gas, and Coal trounce your unprepared community?  Please participate in the first Moscow direct action skills workshop presented by visiting activists since October 2011.  The Bunny Alliance, Resistance Ecology, and Earth First! Journal are staging their nationwide Fight or Flight Tour during Summer 2014, to intensify protests of Delta Airlines and the global Gateway to Hell campaigns, pushing to end the transport of animals to labs [1].  They are making only two August travel stops in the Northern Rockies, with Buffalo Field Campaign near Yellowstone National Park and with Wild Idaho Rising Tide in Moscow, Idaho.

Northern Idaho comrades, do not miss this rare opportunity to learn among an expanding, continent-wide coalition of direct action practitioners!  This training workshop starts at 6 pm on Tuesday, August 12, at The Attic, up the back stairs of 314 East Second Street in Moscow [2].  Please invite your friends and family members, attend, and practice the pro-active, frontline defense knowledge that you acquire.  Thanks!

Thanks to Julian Matthews of Nimiipuu (Nez Perce) Protecting the Environment for photos of the completely assembled and prepared Calumet tar sands refinery megaload awaiting an Idaho permit and travel at the Port of Wilma near Clarkston, Washington [1].  Idaho Transportation Department (ITD) public involvement coordinator Adam Rush stated late on Friday that the Bigge Crane and Rigging/Mammoet-hauled megaload will not move from the port until late during the week of August 3 or “early” on August 11 (Sunday night?) [2].  The bottom hydrocracker section, attempting Highway 95 and 200 passage across Idaho to Great Falls, already received an ITD permit for unused July 27 to 31 transport (so it could obtain a Washington permit?), according to ITD public records received by Wild Idaho Rising Tide (WIRT) on Thursday [3].  It represents the heaviest and longest, climate- and Earth-wrecking, fossil fuel machine to ever cross our region, weighing 1,605,152 pounds and stretching out 441 feet long, 28 feet wide, and 16 feet, 4 inches high.

On Monday afternoon, August 4, one of WIRT’s amazing Montana allies posted a question on the Montana Department of Transportation (MDT) website and received this polite and prompt reply: “Thank you for visiting our website and your inquiry concerning Mammoet Company or Bigge Crane and Rigging.  They have been working through the process, and no permits have been issued at this time.”  In his email reply, our friend asked MDT’s Dan Kiely if he could please notify him if MDT grants a permit for this megaload.  He is also keeping his Flathead Reservation tribal council friends and other neighbors apprised of the situation.  WIRT will issue a report and petition on this issue this week…

Idaho Concerned Area Residents for the Environment, Idaho Residents Against Gas Extraction, and Wild Idaho Rising Tide harbor myriad concerns about the proposed, draft Idaho oil and gas rules as currently rewritten at four June and July 2014 negotiated rulemaking sessions at the Capitol in Boise.  With the assistance of an attorney, we compiled and submitted extensive comments on these rules, but unfortunately, we did not finish these endeavors in time to share them with all of you to support your comments [4].  As demonstrated by regulator discussion and behavior at these recently-concluded sessions, we believe that state commissions and agencies will largely ignore our requests for stronger IDAPA 20.07.02 rules that could significantly improve protections of Idahoans’ democratic participation, property rights, and air and water quality.  As the Idaho Department of Lands presents these rule changes, governing development of the state’s modest oil and gas play, to the Idaho Oil and Gas Conservation Commission on Tuesday, August 5, we assume that decision makers may once again favor industry over the best interests of Idaho citizens.  Although the proposed rules will again undergo (YOUR!) public scrutiny through a hearing and 21-day comment period in early September 2014, we suspect that few citizen-suggested alterations will occur before commission approval and Idaho Legislature consideration and enactment. END_OF_DOCUMENT_TOKEN_TO_BE_REPLACED