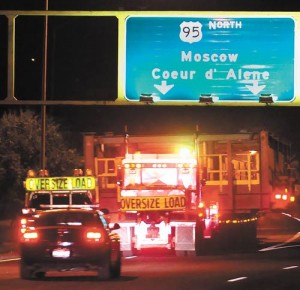 On Tuesday evening, November 29, the contracted hauler Mammoet will transport six megaloads of Alberta tar sands equipment on Highway 95 for ExxonMobil’s Canadian subsidiary Imperial Oil.  If Idaho weather and citizens again abet ecological destruction and Native genocide in northeastern Alberta, three shipments each weighing 80,000 pounds and measuring 80 to 110 feet long will leave the Port of Lewiston after 8 pm.  These 14- to 15-feet high, 24-feet wide, rolling roadblocks will travel independently except when they huddle against Moscow protesters as a single convoy escorted through town by sold-out flaggers and pilot vehicle drivers and our corporate co-opted state police. END_OF_DOCUMENT_TOKEN_TO_BE_REPLACED

There is a question from a gentleman in the fourth row.

He introduces himself as Richard Rothschild. He tells the crowd that he ran for county commissioner in Maryland’s Carroll County because he had come to the conclusion that policies to combat global warming were actually “an attack on middle-class American capitalism.” His question for the panelists, gathered in a Washington, DC, Marriott Hotel in late June, is this: “To what extent is this entire movement simply a green Trojan horse, whose belly is full with red Marxist socioeconomic doctrine?”

Here at the Heartland Institute’s Sixth International Conference on Climate Change, the premier gathering for those dedicated to denying the overwhelming scientific consensus that human activity is warming the planet, this qualifies as a rhetorical question. Like asking a meeting of German central bankers if Greeks are untrustworthy. Still, the panelists aren’t going to pass up an opportunity to tell the questioner just how right he is.

Read more: Capitalism vs. the Climate

(By Naomi Klein, The Nation)