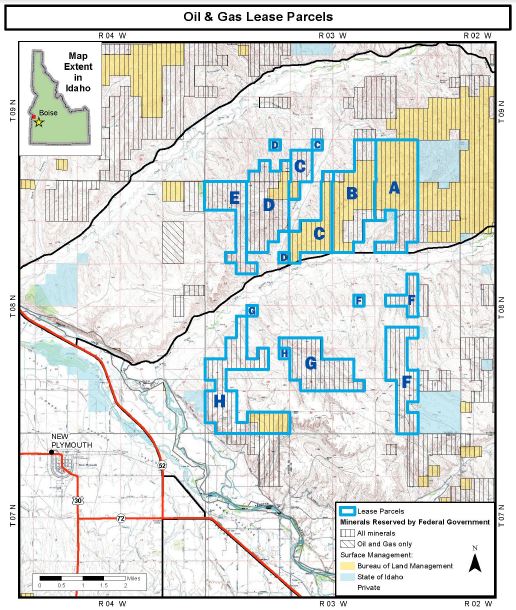 On Wednesday, July 27, at 8 am, dozens of activists from five regional conservation and climate activist groups are holding a “Keep It in the Ground” (KING) rally and protest of the second Bureau of Land Management (BLM) oil and gas lease auction of Payette County federal lands and minerals [1, 2].  At its Idaho State Office in Boise, the BLM plans to offer and sell leases for fossil fuel development on 9,242 acres of Sheep Ridge public lands around the producing and plugged-pending-pipelines oil and gas wells in the Big Willow Creek area seven miles north of New Plymouth [3, 4].

This protest contributes toward a growing, nationwide Keep It in the Ground movement concerned about the climate warming and environmental destruction caused by ongoing fossil fuel extraction and consumption.  KING coalition organizations, such as the Center for Biological Diversity, Friends of the Earth, Great Old Broads for Wilderness, and the Sierra Club, are urging President Obama to expand his climate legacy by stopping new oil and gas leases on public lands, just as he did with coal leases.  On June 18, 2016, in Yosemite National Park, the president said that the greatest threat to all national parks is climate change.

Groups across the western U.S. are planning similar “Keep It in the Ground” rallies for upcoming lease sales, like the one in Roswell, New Mexico, that the BLM has postponed, and past demonstrations in Salt Lake City, Utah, and Reno, Nevada.  The organizations co-sponsoring the rally and protest in Boise on July 27 include Citizens Allied for Integrity and Accountability, Great Old Broads for Wilderness, Idaho Chapter Sierra Club, Idaho Residents Against Gas Extraction, and Wild Idaho Rising Tide (WIRT).

Educating the public about and confronting southwest Idaho oil and gas development throughout our five years, WIRT members are grateful and relieved to work with other groups joining the too-few activists under great duress at three previous auctions of public lands and minerals since April 2014 [5-10].  We encourage you to accompany us on the frontlines of public lands liquidation to the oil and gas industry, at this fourth oil and gas lease auction protest in Boise.  If you can carpool to and from Boise with other north Idaho activists for this significant demonstration, please contact WIRT by email, phone, or facebook message.

Concerned Idahoans are standing up for their rights on Wednesday, July 27, and telling the BLM that public lands in Idaho are not for sale to dangerous extractive industries overrunning our beautiful state.  Bring your soft signs, banners, and enthusiasm, and meet at 8 am MDT at the southwest corner of the Walmart parking lot, close to Burger King, near West Overland Road and South Vinnell Way in Boise.

Participants will cross Vinnell to the BLM Idaho State Office at 1387 South Vinnell Way (on the left, to the south).  The oil and gas lease auction in the Sagebrush Conference Room begins at 9 am and will likely conclude by 12 noon.  Entering this government building requires presenting photo identification and signing in for the auction (and action!). END_OF_DOCUMENT_TOKEN_TO_BE_REPLACED