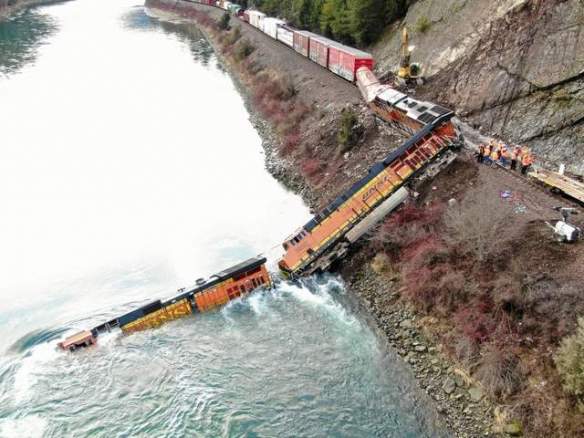 Since late on Wednesday, New Year’s Day, north Idahoans and Wild Idaho Rising Tide (WIRT) have been enduring a major environmental disaster: Two rockslide-derailed, Burlington Northern Santa Fe (BNSF) Railway locomotives in the Kootenai River, one nose-down on the bank and one submerged and leaking at least 2,100 gallons of diesel fuel toward a Kootenai Tribe fish restoration hatchery, 2.5 miles downstream, and into the critical habitat of three endangered species (sturgeon, burbot, and bull trout) and private and municipal water sources.  Industry-friendly, mainstream media have been repeating and embellishing hero stories about multiple emergency response agencies rescuing the trapped, almost drowned, two-person, BNSF crew with a county sheriff boat, two hours after a BNSF co-worker climbed down the now fully sunk, front engine and sledge-hammered and kicked its window open.  But is potential and proven emergency preparedness truly heroic when its enables the further ecosystem and economic devastation imposed on rural communities by private profiteers’ inherently perilous, fossil-fueled railroads?

Early on January 2, hazardous materials and other crews placed oil containment booms and shut down water intake pipes, as precautionary measures at the Kootenai Tribe’s Twin Rivers Hatchery on the Moyie-Kootenai rivers confluence.  On Friday, January 3, Boundary County declared a state of emergency and closed the Kootenai River for a week, and then extended the emergency order until February 8 on Monday, January 6, banning all motorized, public boat traffic from the Montana border eight miles upstream of the derailment, to Bonners Ferry eight miles down-current.  Belatedly on January 4, Boundary County issued a water quality advisory cautioning residents against direct, river water use during derailment “clean-up” operations.  Officials say that the diesel-polluted water is not flammable and does not endanger public health, safety, and drinking water supplies.

Regulating and documenting derailment impacts, the U.S. Environmental Protection Agency (EPA) has concluded its incident oversight, calling the spill “minor,” although divers recovered only water from the BNSF locomotive fuel tank and crank case in the river last week, which together held between 2,100 and 5,200 gallons.  Spokane television news reporters earlier noticed and videoed oily sheens on the river in Bonners Ferry, among 6,200-plus feet of containment boom placed in the waterway.  But the EPA, Idaho Department of Environmental Quality, and Boundary County are testing water every 24 hours in six places, and allowing BNSF employees and contractors to conduct river water sampling for pollution, an activity obviously conflicted by railroad avoidance of fines and legal challenges, not to mention its operation and profit motives that risk further catastrophes.

Do you remember regional citizens’ concerns, during the initial, 2010-11 years of resistance to tar sands mining and refining megaloads on U.S. Highway 12, about a megaload tumbling into the wild and scenic Lochsa and Clearwater rivers and Nez Perce Reservation waters?  Predictably, it has happened (again!) in north Idaho, except the megaload is one of hundreds of diesel-spewing, half-million-pound locomotives that daily rampage the shores of three Columbia River basin watersheds — the Kootenai, Pend Oreille, and Spokane — hauling loads as benign as lumber and grain and as deadly as Bakken crude, Canadian tar sands, and other hazardous substances.  The same fossil fuels pipeline-on-rails perpetrator that WIRT and #No2ndBridge activists and recently issue-mute, bigger green allies have opposed for its bridge and track expansion over Lake Pend Oreille and Sandpoint, BNSF still has not and perhaps cannot carefully remove its submerged locomotive from the Kootenai River.  Without contingency plans for similar, future predicaments, the corporate interloper may abandon its megaload until spring and drag it across the river to sand bars, to dismantle and float it downstream for scrap.  Potentially culpable for worker endangerment, river contamination, and indigenous, rare fisheries ruin, BNSF could have prevented or alerted the derailed train operators of the rockslide that caused the wreck, if it had replaced a rock barrier and warning fence in the derailment area, which it removed during rail corridor maintenance several years earlier.

While reviewing, writing, and sharing daily media and WIRT activist articles, insights, and site visit photos during the last few weeks, WIRT has been overwhelmed by grief, outrage, and the voluminous but fact-vacuous, media information about this Kootenai River derailment.  BNSF assumes that the mostly complicit Panhandle inhabitants who bear the ongoing pollution and disaster risks of this multi-billion-dollar business will not ask questions or challenge its false narratives or remember its snafus that increasingly offer evidence unfavorable to its Northwest infrastructure and operations expansions.  But WIRT is determined to continue our investigation of this instance of inevitable derailments, and to insist that local, state, and federal agencies protect the public trust and watersheds by collecting and analyzing independent data on water quality degraded by the railroad industry.  Please contact us if you can assist with ground-truthing the environmental impacts of this corporate crime scene in a canyon constrained by steep cliffs, forested private lands, and the BNSF-requested, extended river closure.  We also intend to gather and condense our continuing facebook posts about this situation into an emailed and website-shared newsletter.  For now, we have linked those posts and their embedded news articles through this ever-expanding photo compilation:

From 5:30 to 7:30 pm on Wednesday, January 15, in the upstairs game room of Eichardt’s Pub, at 212 Cedar Street in Sandpoint, US Climate Action Network (USCAN) organizers Jacob Johns and Carrie Clayton are hosting a beta test group for Arm in Arm, a new, nationwide, social movement that builds trust and alignment among members and organizes communities, by centering economic and racial justice in transformational era efforts that end the climate crisis.  Friend and fellow activist Jacob, who participated in December 2019, indigenous talks and demonstrations at the United Nations Climate Change Conference (COP25) in Madrid, has served as the structure coordinator for Arm in Arm for six months.  He and Carrie are asking participants to share their knowledge on engaging communities, and give feedback and input from grassroots perspectives on improving the network model.  Not a climate science talk or activism training, the meeting will begin with introductions, share a presentation on the Arm in Arm story, structure, and strategy, and conclude with group discussion, evaluation, and increased understanding of the movement.  Find more event information and register or not, through the following link, and join the Arm in Arm team in Sandpoint this week.

The WIRT climate activist collective welcomes opportunities to talk with you and the regional, environmental and indigenous community about critical issues, at monthly, WIRT, potluck gatherings that include climate action films and strategy and tactics discussions, as we together relentlessly confront the fossil fuel causes of climate chaos, through frontline actions and solutions.  Grassroots, WIRT organizers invite your involvement in arranging upcoming, #No2ndBridge litigation, petition signature gathering at Women’s Marches in Moscow and Sandpoint, and petition delivery at state and federal agency offices, BNSF Kootenai River wreck protests, documentary and panel presentations, direct actions and training workshops, and public outreach.  We encourage you to offer your unique advice and assistance, by participating in activity planning conversations starting at 6 pm (not the usual 7 pm) on the first and third Thursdays (now instead of Wednesdays) of every month, respectively in Moscow and Sandpoint.  Due to winter conditions, WIRT will probably not hold Moscow meetings during January and February 2020, at The Attic, up the back stairs of 314 East Second Street.  But the next Sandpoint gathering happens this Thursday, January 16, at the Gardenia Center, 400 Church Street.  For updates on ongoing and emerging, Northwest and continent-wide, fossil fuels invasions and protests, please check WIRT website and especially facebook pages for informative posts and articles, listen to WIRT’s weekly, Climate Justice Forum radio program, and sign the #No2ndBridge petition:

Directly impacted, frontline communities are the truest defense against further ecological and climate devastation.  The passion of a few dedicated, volunteer organizers and small, effective, grassroots groups, haranguing and halting fossil fuel infrastructure, extraction, and transportation onslaughts, are the best antidote to corporate hegemony and hubris, government complicity and corruption, and citizen apathy and antagonism.  Truly committed climate activism requires organizing and empowering regional efforts to stop climate chaos perpetrators: the reckless, greedy, fossil fuel and railroad industries and rubberstamping local, state, and federal decision makers.  Such endeavors rely on the resources of activists’ energy, time, income, and assets — sacrifices that few others are willing to bear for the greater good — and the support of community members who understand the enduring, public benefits and precarious, personal costs of climate activism.

During nine years of WIRT’s peaceful protests, courageous blockades, public education, proactive litigation, and regionally protective resistance, we have overcome arrests, societal ridicule, ally exclusion, FBI harassment, police surveillance, legal expenses, and other harms we rarely reveal.  And we have consistently requested your participation, both physically as a volunteer and fiscally as a funding supporter of WIRT campaigns.  How will you respond?  As we continue to build the inland Northwest, climate justice movement and confront the fossil fuel sources of human rights violations, environmental devastation, and climate chaos, WE NEED YOUR HELP!  Please join us at WIRT-hosted, community events and contribute generously online or via mail, toward the expenses of frontline defense of regional air and water and #No2ndBridge court challenges.  Thanks!