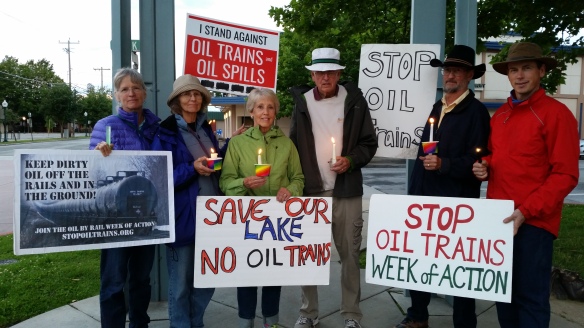 Under rainy skies on Saturday morning, July 9, seven community members attended a social gathering hosted by 350Sandpoint in City Beach Park in Sandpoint. Participants stood around a table under a pavilion tent, networked, and distributed relevant information about climate change issues addressed by various, allied, local groups.  Focused on education, organizers welcomed everyone to suggest public events that they could coordinate.

At Moscow Farmers Market on the same Saturday, Palouse Environmental Sustainability Coalition (PESC) members talked with dozens of visitors of their outreach table at Friendship Square in Moscow, where they circulated fliers about the Lac-Mégantic disaster and displayed a poster with the written memories of local 2103 Tar Sands Healing Walk participants hearing about the tragedy while attending the First Nations ceremonies in Alberta. Moscow activists also gathered signatures for a petition to Governor Otter asking for his support of “all efforts to prevent oil and coal trains from passing through the state of Idaho” for health and safety reasons.

To honor the 47 Lac-Mégantic oil train victims, WIRT and 350Sandpoint held a candlelight vigil and march with protest signs through downtown Sandpoint, from Farmin Park to the BNSF rail line near the Amtrak station, on Tuesday evening, July 12. Despite the solemn spirit of the hour-long demonstration, city and railroad police dogged the seven concerned residents of the vulnerable, rural Idaho, oil train corridor throughout the event.  After walking the quiet streets and sharing personal stories and reflections, half of the participants did not finish at the tracks.

350Sandpoint, PESC, and WIRT are deeply grateful for the friends, neighbors, and partner organizations who together contributed their efforts toward the #StopOilTrains in Idaho Week of Action. In appreciation of them, the victims of catastrophic oil train derailments, fires, and spills in Lac-Mégantic Quebec, Mosier Oregon, and dozens of other impacted communities, and the 15,500-plus residents of the mile-wide, Bonner County, Idaho oil train route “blast zones,” we are calling on Idaho government officials to end all coal and oil train transportation through the state [7-10].

As the oil and railroad industries continue to propose and build new and expanded infrastructure to extract, transport, refine, and burn oil, tar sands, coal, natural gas, and other fossil fuels throughout Canada and the United States, they increasingly and recklessly risk and damage public and environmental health and safety and the global climate. These companies withhold the travel logistics of their mile-long, multi-million-gallon train loads of flammable crude oil and other hazardous and toxic cargo from under-prepared emergency responders, elected officials, and affected communities.  Years-long requests for better information, federal regulations, and inspection standards have failed to improve the safety of inherently dangerous fossil fuel railroad traffic.

The sudden derailment, oil spill, and fire imposed by a Union Pacific oil train on the Columbia River Gorge town of Mosier, Oregon, on June 3, 2016, prompted representatives at every level of government in Oregon and Washington to call for an immediate but temporary ban on unit crude oil trains in their states. Idahoans must demand a similar moratorium and seek resolution of environmental injustices wrought by extreme energy profiteers, through creative, strong, fossil fuel resistance that protects lives, home places, and livelihoods from the threats of coal and oil trains and their resulting air, water, and soil pollution and climate change.  We must enforce our rights to a healthy and safe environment and climate, and independently monitor and protest westbound oil and coal rail traffic through Idaho, particularly around water bodies bordered or crossed by tracks carrying sinkable tar sands crude [11].  And we must continue to reject proposed train terminals in Boardman, Oregon, and Anacortes, Cherry Point, Grays Harbor, Longview, and Vancouver, Washington.

[5] Join Thousands of People across North America to #StopOilTrains! Stand.Earth