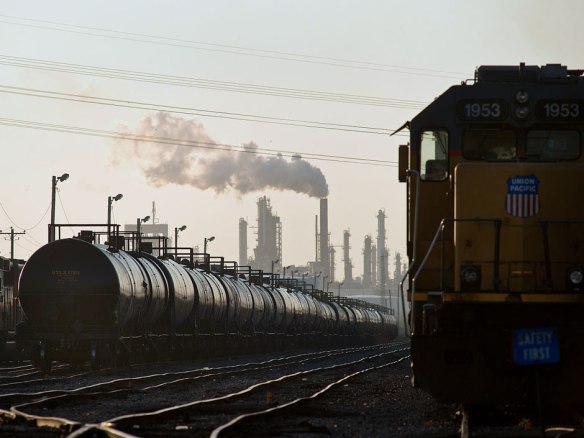 Almost a dozen new crude oil terminal and refinery infrastructure projects currently proposed for the Oregon and Washington coasts could drastically increase the amount of oil trains moving across northern Idaho and Spokane, as these rail shipments escalate across the country [1].  The most advanced in the permitting process, Tesoro Savage plans to construct and operate the largest crude oil storage and transfer facility of all, at the Port of Vancouver, Washington, to transport nearly half the capacity of the Keystone XL pipeline: 380,000 barrels of oil per day [2].

The fracked Bakken shale oil fields in North Dakota and surface and the in-situ and surface tar sands mines in Alberta supply this volatile crude “pipeline on rails.”  Continent-wide, over 30 accidents on such conduits have occurred during the last year.  A Bakken oil train derailed, exploded, and killed 47 people in Lac-Megantic, Quebec, this summer, and an Alabama wreck burned for days and ruined wetlands in November [3].  The British Petroleum oil drilling rig blowout in the Gulf of Mexico and the Enbridge tar sands pipeline breach along the Kalamazoo River in 2010, and the Exxon Valdez oil tanker grounding and spill into Prince William Sound in 1989 all serve as reminders that transporting oil guarantees accidents with devastating consequences.  Although state, county, and city agencies do not currently have emergency response plans for oil train accidents in place, it is not a matter of if, but when, similar disasters could happen in the interior Northwest.

Additional rail traffic carrying dangerous crude oil through the region raises numerous community concerns about conditions similar to coal train passage, such as the impacts of diesel exhaust and coal dust on human and environmental health, of vehicle congestion and strained rail line capacity on regional commerce, and of infrastructure upgrades on public funds.  More coal trains and coal dust on the same tracks could compromise their integrity and stability and cumulatively increase the probability of hazardous rail scenarios.

When Spokane area citizens, organizations, and officials first became aware of the Tesoro Savage oil terminal proposal and subsequent public comment period a few months ago, they wrote several letters to Washington’s Energy Facility Site Evaluation Council (EFSEC), asking for a public hearing in Spokane.  At the time, EFSEC planned only one scoping hearing in Vancouver on October 29 [4].  On November 8, EFSEC announced a public comment period extension to December 18 and a Spokane hearing on December 11 [5].

Please wear red to show solidarity and make your voice heard at the EFSEC public scoping hearing on Wednesday, December 11 [6]!  From 6 to 9 pm, you can provide public testimony or show support through participation at the CenterPlace Regional Event Center, 2426 North Discovery Place in Spokane Valley, Washington.  Get involved and stand up again to confront yet another dirty energy project, as we together fight off Big Oil’s proliferation of regional crude oil shipments.

Public interest groups have created plenty of resources, updated over time, to assist your much appreciated input.  Learn more about the Tesoro Savage proposal, the current permitting process, and how to give effective public testimony at the Spokane hearing.  Check out the Center for Justice website for information and fact sheets about the terminal proposal [7], and the Spokane Clean Water Project web page for some talking points [8].  Sign the Columbia Riverkeeper petition or use it to generate your comments [9].  Help spread the word about the hearing and comment period via social media and email.  But among all of your appreciated efforts, please assert your concerns to EFSEC before the Wednesday, December 18 comment deadline.  Send your written remarks by email to efsec@utc.wa.gov or by mail to Stephen Posner, Interim Manager, Energy Facility Site Evaluation Council, P.O. Box 43172, 1300 S. Evergreen Park Drive SW, Olympia, Washington 98504-3172 [2].  Do not hesitate to ask WIRT and allies questions about this issue, if necessary.