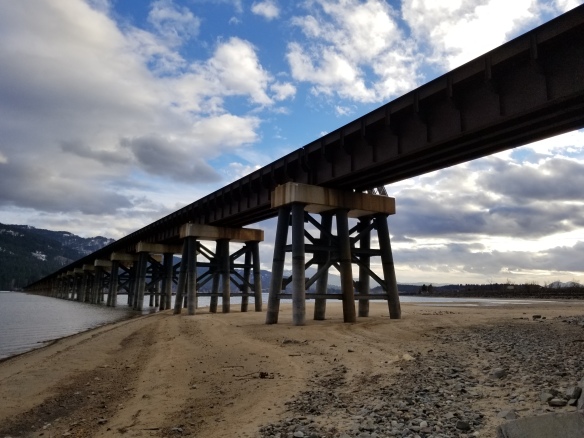 On Friday, February 8, news spread of the U.S. Coast Guard release of a draft environmental assessment (EA), not a more scientifically-rigorous, community-preferred, Sandpoint City Council-requested, draft environmental impact statement (EIS) with route and design alternatives, on Burlington Northern Santa Fe (BNSF) Railway’s proposed construction of second (in order to replace the first) railroad bridges across Sand Creek and almost one mile over Lake Pend Oreille, in Sandpoint and Bonner County, Idaho [1-3]. On the same day, district judge John Judge heard oral arguments by phone, on BNSF and state of Idaho motions to dismiss Wild Idaho Rising Tide’s (WIRT) seven-month, #No2ndBridge lawsuit, on standing, jurisdictional, and procedural issues, not the strong, meritorious arguments of our petition for judicial review of an Idaho Department of Lands (IDL)/Idaho State Board of Land Commissioners encroachment permit for BNSF’s bridge expansion [4].  The judge did not immediately rule on these complex, dispositive and other motions, responses, replies, and objections, but has been deliberating and writing his difficult, landmark decision on Lake Protection Act and Idaho standing laws, during recent and coming weeks.  As activists cautiously participating in public processes, we remain hopeful, and acquired greater respect for judge John Judge at the hearing attended by two WIRT board members.

Like the north Idaho community, WIRT activists have since been devastated by intense, sub-zero, northeast winds gusting to 50 mph and spewing railroaded coal into the lake and neighborhood tree falls during the February 8-10 weekend, deep, engulfing snows throughout the following week, and a nearby, downtown Sandpoint fire on Monday morning, February 11 [5]. Despite firefighters from several regional districts working amid snowfall, 11-degree temperatures, and aerial hose spray that coated them with ice, the fire inflicted smoke and water damages on a church and destroyed and displaced six local, small businesses (three restaurants, a pub, a salon, and a tattoo/piercing shop) in a couple of century-old buildings, at the corner of Bridge Street and First Avenue in Sandpoint’s historic district.

These Sandpoint City Beach area businesses and surrounding residences most directly, significantly impacted by BNSF’s corporate, infrastructure expansion scheme continue to suffer fire losses and/or travel restrictions since the incident at the site of one of WIRT’s most recent direct actions during the Fourth Panhandle Paddle, when Occupy Spokane and WIRT activists spotlighted #No2ndBridge, anti-fossil fuels, and other environmental, climate, and social justice messages outside China Kitchen on September 8, 2018 [6]. Sandpoint police and Idaho fire marshals are investigating the cause and origin location of the fire, and a city-hired engineer condemned both stability-compromised structures, due to fire damages estimated at $4 to $7 million.  The Sandpoint, fossil fuels frontline also lost an indigenous art store and Italian restaurant to city building condemnation last September.

Frustrated with lawsuit financial and communication oppression and limited community responses to ongoing, WIRT pleas for support of litigation expenses, we are sending this recently rare, action alert to our thousand regional contacts, about these and other situations requiring public input, drawn from WIRT’s primary modes of outreach communication, our weekly, Climate Justice Forum radio program and numerous facebook posts over the last few months.  In forthcoming newsletters, we plan to further provide court case updates and requests for your contributions toward our legal battles, and to announce #No2ndBridge presentations on March 5, 6, 8, and 9, respectively in Missoula, Moscow, Sandpoint, and Spokane.

As the lead, federal agency regulating proposed, BNSF infrastructure expansion via three new, permanent, rail bridges and two temporary, construction spans in the Sandpoint area, the Seattle-based, U.S. Coast Guard (USCG), District 13 office is accepting public input on the February 6, 2019, draft environmental assessment (EA) for the project, written by BNSF and contracted, Jacobs Engineering staff (EA page 111) [7]. USCG will host two public hearings at 8 am and 6 pm on March 13, at the Ponderay Events Center, 401 Bonner Mall Way in Ponderay, but not in more project-impacted Sandpoint, and will hold a comment period until 8:59 pm Pacific time on March 25, according to its Federal Register notice.  Please see the notice of availability of and the draft EA on the BNSF Sandpoint Junction Connector project, docket USCG-2018-1085, along with 12 supporting appendices offering bridge permit drawings, site photographs, a wetlands and waters of the U.S. delineation report and impact maps, hydraulic and visual impact analyses, a biological assessment, state historic preservation office and other state and local agency letters, the Pend Oreille basin emergency response plan and action reports, and the IDL encroachment permit currently litigated by WIRT.

Moreover, the Coast Guard EA process is only conducting ongoing but incomplete, government-to-government, Section 106 tribal consultation, by sending a cultural resources technical report for the proposed action alternative to the Coeur d’Alene, Kalispel, Kootenai, and Spokane tribes (EA page 105), but not the Confederated Salish and Kootenai Tribes (CSKT) mentioned in the February 26, 2018, U.S. Army Corps of Engineers (USACE) notice of the BNSF, joint, IDL/USACE application and comment period [8]. That first, public, project document acknowledges federal agency responsibilities and obligations to recognized tribes, treaties, and other laws, “to consider and consult on potential effects to tribal rights, uses, and interests.”  But draft EA document searches disclose that tribal responses (only from the Kootenai Tribe) and internationally-accepted free, prior, and informed, indigenous consent are missing, and/or tribal input results only described in the final decision document, either a finding of no significant impact (FONSI) or EIS recommendation.

Not stated in the environmental justice section of the draft EA (EA pages 73-74), BNSF also intends to roll over low-income and walking/biking, area residents dependent for transportation between Sandpoint and Sagle on the Serenity Lee trail between U.S. Highway 95 and the BNSF tracks, and on the pedestrian bridge paralleling the highway Long Bridge, both routes in the Idaho Transportation Department (ITD) right-of-way and co-maintained by Bonner County. ITD, to whom BNSF transferred some of its right-of-way for the Sand Creek Byway, as well as Bonner County commissioners and road and bridge staff are cheerleading BNSF plans to fund and build a pedestrian/cyclist path tunnel near Dog Beach, under an on/off ramp at a 55 mph, Highway 95 curve where BNSF accesses its construction staging area for lake railroad bridge operations, at the north end of the Long Bridge [9].  Still seeking USCG bridge and USACE dredge/fill/wetland permits and public approval of its expansion desires, BNSF expects tunnel construction to begin this year, while it quietly plans to replace its existing, bottleneck bridges after pending project completion [10].

While WIRT further scrutinizes the draft EA and appendices and prepares comment suggestions and written and oral testimony, not to improve the final EA, associated FONSI, and community infrastructure kickbacks, but to delay and divert downstream this fossil fuel infrastructure, we earnestly encourage you to:

1) Request extension of the draft EA comment period to 90 days, due to the scale of the proposed, BNSF project, the regional and global scope of its significantly adverse, direct, indirect, and cumulative impacts, the complexity and volume of USCG, other involved agency, and current, court challenge records, and to provide prolonged, better opportunities for well-researched and -considered, tribal and public rebuttals to the BNSF-compromised, draft EA.

2) Ask for one or more Sandpoint hearings on the draft EA and BNSF project, and for public scoping for and production of more comprehensive, draft and final environmental impact statements compiled by an unbiased, independent company or government agency not paid or otherwise influenced by BNSF and its contractors, and that honor the concerns and implement the suggestions of regional tribes and citizens and the May 2, 2018, Sandpoint City Council resolution requesting an EIS for the BNSF proposal [11].

3) See the second and third sections of the draft EA notice of availability, entitled public participation and request for comments, and public meetings, for instructions on providing your input on these USCG documents and processes [12]. In your written and oral comments on the draft EA, which you can offer anonymously, specifically request inclusion and incorporation of your remarks and accompanying, evidentiary material into the official, case record for docket USCG-2018-1085.  The Coast Guard will post all comments, along with any included, personal information, received through the online portal during the comment period, presently ending at 8:59 pm Pacific time on March 25, on the website pages for the docket [7].

4) Please attend one or both open, public, two-hour, draft EA “meetings” at 8 am and 6 pm on Wednesday, March 13, at the Ponderay Events Center, 401 Bonner Mall Way in Ponderay. If you plan to present testimony, ask for this opportunity through the same, online, docket portal accepting written remarks, and USCG personnel will call upon speakers in order of received requests, followed by hearing participants who have not signed up in advance.  The hearing officer may limit individual speaking durations, if many people choose to orally comment, or may end the gathering early, if all testifiers have spoken.  The Coast Guard will accept written material at the meetings, and offer testimony transcripts for public review about 30 days later.

5) Although the Coast Guard says that they “have already considered the comments submitted during the USACE-IDL public comment period, and those comments are now part of the official, Coast Guard record for BNSF’s bridge permit application,” WIRT activists did not see those remarks, examined well during our litigation, among the 1339 pages of the draft EA documents, so again provide those original or revised comments [12]. Please thoroughly supplement this BNSF-composed, USCG-supported, administrative record, and thereby preserve later rights to object to permit decision outcomes, with any evidence that you can cull, produce, and prepare for statements.  Relevant topics and studies for inclusion could address air, water, environmental, scenic, and economic qualities and values, native fish, wildlife, bull trout, and their habitats, indigenous cultures, treaties, and rights, increased train traffic, noise, and toxic coal and diesel pollution, hazardous materials and bi-directional derailments and disasters, railroad negligence of worker and trackside resident health and safety, impeded navigation, emergency and vehicle travel, recreation, tourism, and business, vulnerable, historic sites and private properties, inconsistencies in Sand Creek designations as a stream or lake inlet, and other, pertinent factors of this BNSF project listed in the Petition to Deny and Revoke Permits for the BNSF Sandpoint Junction Connector Project, which we urge you to sign with comments [13].

6) Both reactively reveal errors in the false, draft EA information manufactured by BNSF and Jacobs Engineering, and/or proactively provide plenty of damning counter-facts, none of it intended to strengthen a final EA and FONSI, but always advocate for an EIS. The USCG advises commenters to:

Indicate the specific section of the document to which each comment applies, and provide a reason for each suggestion or recommendation…[Offer] comments on completeness and adequacy of the document, and on other environmental and historic preservation concerns,…relevant information or topics missing from or not adequately addressed in the draft EA, and how we can obtain that information. This includes suggesting analyses and methodologies for use in the draft EA or possible sources of data or information not included in the draft EA…Provide detailed, resource-specific information about the size, nature, or effect of the impacts the bridge permit [would] have on the human environment [12].

The north Idaho, #No2ndBridge community needs everyone’s efforts during this potentially last chance, unless we can together secure an EIS through this public process or the courts, to amplify regional rejection of this culpable, railroad scheme to build fossil fuel pipeline-on-rails infrastructure in train-spewed, lake bed, coal deposits, threatened bull trout critical habitat, and lake and aquifer water (is life!) resources.  Thanks!