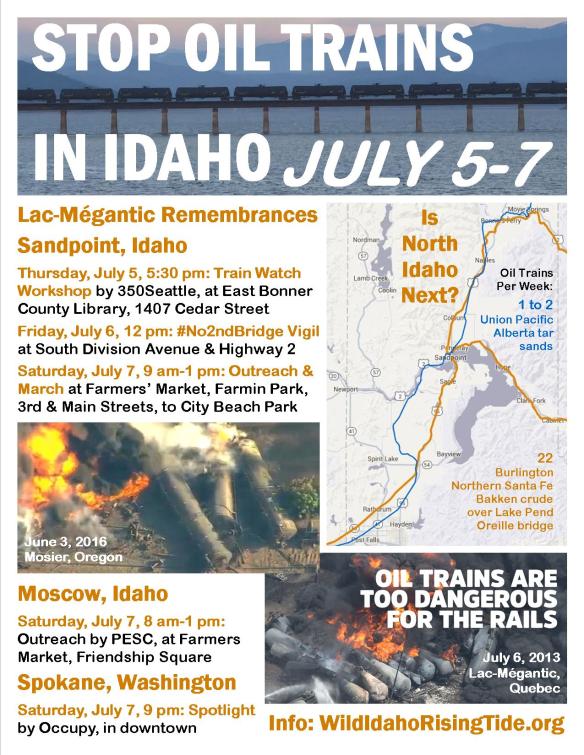 North Idaho and eastern Washington activists invite everyone to participate in five Stop Oil Trains in Idaho events on July 5, 6, and 7, commemorating the 47 lives lost to a Bakken crude oil train derailment, spill, explosion, and fire in downtown Lac-Mégantic, Quebec, on Saturday night, July 6, 2013.  During the five years since this tragedy, dozens of similar accidents have wrecked public and environmental health and safety and the global climate – more than in the previous four decades – including the Union Pacific oil train disaster in the Columbia River Gorge town of Mosier, Oregon, on June 3, 2016.  In response, Wild Idaho Rising Tide (WIRT), 350Seattle, Occupy, Palouse Environmental Sustainability Coalition, and allied Moscow, Sandpoint, and Spokane partner groups have participated with thousands of people around North America in Stop Oil Trains actions [1-4].

Through multiple training, protest, and outreach events, concerned citizens continue to actively oppose and call for an end to all Alberta tar sands and Bakken shale oil exploitation and train and pipeline transportation, refusing to let Big Oil threaten and risk our families, friends, homes, businesses, lands, waters, and air.  Together with environmental and social justice activists across the U.S. and Canada, we are organizing various tactics and resources to stage powerful, effective actions defending and protecting frontline, rail corridor communities and the global climate.

Please join these demonstrations and/or host or attend an event in your vicinity around July 6, to stand in solidarity with Lac-Mégantic and other towns and cities demanding an immediate ban on the railroad industry’s extreme energy pipeline-on-wheels.  Thanks to everyone who has provided invaluable, relevant ideas, connections, and on-the-ground support for these events.  We welcome your questions, suggestions, assistance, and refreshments at these upcoming actions: Please reply through the enclosed contact channels or on-site.  Expect ongoing descriptions of Northwest train and terminal issue background and recent updates, via WIRT facebook and website pages.

To remember and honor the 47 Lac-Mégantic disaster victims and all lives impacted by oil-by-rail traffic and accidents, please gather for a vigil at 12 pm on Friday, July 6, at the South Division Avenue and U.S. Highway 2 intersection, outside the Sandpoint office of the Idaho Department of Lands (IDL).  Bring your friends, family, neighbors, co-workers, protest signs, and creative spirit, to show community resistance to oil trains and a second rail bridge over Idaho’s largest and deepest lake.

Within a day after BNSF secured Idaho agency permission to further risk lives and pollute regional lake and aquifer water with expanded, rail infrastructure and transportation, the company derailed and dumped Alberta tar sands into a Missouri River tributary near Doon (doom?), in northwest Iowa [7].  Along and over the Kootenai, Clark Fork, Pend Oreille, Spokane, Columbia, and other rivers throughout north Idaho and the Northwest, BNSF carries 22 volatile, Bakken crude oil trains every week, while Union Pacific hauls one to two trains of equally explosive and irretrievably sinkable tar sands per week.  Over 90 percent of these shipments must cross the almost mile-long, Lake Pend Oreille bridge.

The Palouse Environmental Sustainability Coalition (PESC) will converge at its Moscow Farmers Market outreach table on Friendship Square, Fourth and Main streets in Moscow, Idaho, between 8 am and 1 pm on Saturday, July 7, to commemorate the Lac-Mégantic oil train disaster and support regional opposition to BNSF’s second Lake Pend Oreille rail bridge.  Along with WIRT, PESC will circulate a #No2ndBridge petition and offer updates on coal and oil trains traversing Idaho.  At similar, past events, PESC members have shared their written thoughts about the Lac-Mégantic accident, which occurred on the night before their march in the 2013 Tar Sands Healing Walk in Alberta.

Gather with volunteer activists and fellow citizens between 9 am and 1 pm on Saturday, July 7, at the WIRT outreach table under the Farmin Park clock, at the Farmers’ Market at Sandpoint, Third and Main streets.  We hope to talk with residents and visitors of the one-mile-wide, north Idaho “bomb train blast zone,” and provide petitions, educational flyers, and brochures about Northwest oil trains and infrastructure, like the second, BNSF, rail bridge proposed for nearby Lake Pend Oreille [8, 9].

Starting from the Farmin Park clock at 1 pm on Saturday afternoon, July 7, we will walk with signs protesting the Northwest pipeline-on-wheels and railroad expansion, through downtown Sandpoint and over the Sand Creek bridge, to the historic train station and City Beach Park.  At these public destinations, we will share reflections and stories about the isolated vulnerability of rural, rail corridor people and places to oil train catastrophes.

As the sun sets, Occupy comrades will generously offer a brief, light projection display of social and climate justice messages on tall buildings in downtown Spokane, Washington.  Meet after 9 pm wherever you see this light show, for discussions among curious passersby, about Northwest oil train and terminal issues.