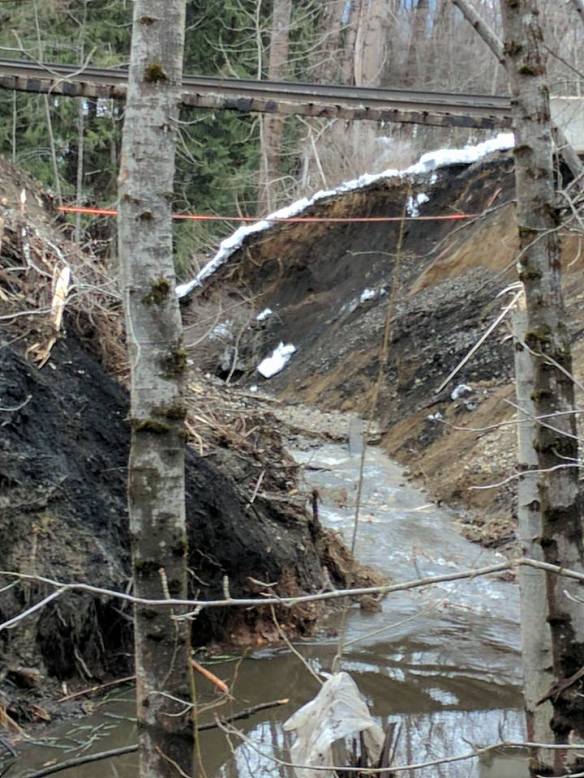 At 6:05 am on a dark, rainy Saint Patrick’s Day, Friday, March 17, 50 to 60 empty cars and a rear locomotive of an eastbound, Montana Rail Link (MRL), unit coal train derailed, remained upright, caused no injuries, and released no obvious hazardous materials in Ponderay and Kootenai, Idaho [1-5].  The wreck occurred on MRL’s mainline, owned and operated in Idaho by Burlington Northern Santa Fe (BNSF) Railway, a route typically carrying mixed freight and Powder River Basin coal – rarely Bakken shale oil and Alberta tar sands crude – from the east, through Missoula, around Lake Pend Oreille, and over the 4800-foot rail bridge southeast of Sandpoint.  Railroad first responders assessed the situation, located approximately 450 feet uphill and separated from the lake shoreline by a stretch of trees, only 250 feet from modest homes and two blocks from the post office and police station in Ponderay.  They would not estimate the timing of the re-opening of their tracks, but determined that recently intense rains and rapid snow melt had washed out a section of collapsed tracks “east of the intersection of Third Street and Cedar Avenue.” [6]

One set of train tracks and a Jersey barrier were suspended over a 30-foot-tall void in the railroad’s embankment on Friday.  At the bottom of the void was a current of storm water.  Other culverts under the tracks on Ponder Point appeared to be running at or near capacity on Friday afternoon…The cause of the wash-out remained under investigation…”High water levels and ground saturation are contributing factors.” [6]

The BNSF and MRL railroad companies, respectively based in Fort Worth, Texas, and Missoula, Montana, brought dozens of crew members, semi-trucks and trailers, and large pieces of ground and track-mounted, heavy equipment to staging areas east and west of the derailment, at Kootenai Bay Road and Seven Sisters Drive on both sides of Idaho Highway 200 in Kootenai, and at Fourth Street and Elm Avenue, adjacent to the railroad right-of-way in Ponderay, all photographed by Wild Idaho Rising Tide (WIRT).  Despite overwhelming railroad presence and close proximity to Ponderay houses, businesses, and government facilities, media stories rarely mentioned Ponderay as the location of this historic mishap, instead stating a derailment “west of Kootenai Bay Road in Kootenai, Idaho,” in the vicinity of a wealthy, lakeside, residential neighborhood.

While media reporters and government officials easily accessed the MRL-BNSF derailment mitigation staging site in Ponderay, to obtain crucial information, photographs of the damaged track area, and footage of interviews, nearby, impacted, community members and fossil fuel train monitoring and opposing activists could only reach the accident scene by vehicle and on foot for miles on snowy, lakeside trails, on muddy residential streets, and through wet forests, evading railroad cops to find, observe, and ascertain the accident scene [7-9].  At about 3 pm, two black helicopters left the Sandpoint Airport, circled over Lake Pend Oreille, and flew over the incident site.  Not until the following day, March 18, the local newspaper provided comprehensive event coverage confirming additional details of the emerging story.  By 4:48 pm on that rainy Saturday afternoon, a Kansas City Southern engine trailed one of the first, westbound, mixed freight trains crossing tracks repaired over the 30-foot chasm likely filled by the multiple dump trucks seen in the area since Friday.

Nationally affiliated, water quality advocates Lake Pend Oreille Waterkeeper, statewide conservation organization Idaho Conservation League, and regional, frontline, climate activist collective WIRT have opposed increased, if not all, coal and oil shipments by rail through north Idaho.  They have shared concerns about the effects of diesel engine fumes, coal pollution of air and water, the catastrophic nature of train derailments, and the broader implications of fossil fuel production for human rights and climate change.  Through diverse tactics, these groups have expressed their certainty that dirty energy train tragedies will affect many lives and places.

In the wake of four disastrous and deadly, Union Pacific train accidents over the last year, including three in north Idaho, Panhandle rail line residents are understandably raising questions about potential industrial holocaust.  We have heartbreakingly witnessed the Mosier, Oregon oil train explosion, fire, and spill on June 3, 2016, the Coeur d’Alene freight train-vehicle crash death of a high school musician on February 7, 2017, the Sandpoint train collision with a family dog on March 7, 2017, and the Moyie Springs derailed, spilled grain train on a steep, river valley slope only two days earlier, on March 15, 2017 [10-12].

What if this train had been carrying a full load of dirty coal or oil?  What about more spring break-up under the tracks down the line?  Do railroads have restrictions like heavy trucks on roadways? [13]

It’s going to take a lot of work to restore that section of track.  With more rain and more mudslides happening right now, things are getting really sketchy.  …They should halt all rail shipments until the ground is less saturated.  …All oil and coal trains need to stop now.  It’s still raining, and snow is melting, and it’s just a matter of time before catastrophe [14].

As we gratefully dodge loaded oil and coal train wrecks, are we overlooking less perceptible harms foisted by BNSF and MRL on vulnerable populations?  Several, adjacent, Ponderay residents alerted their community, via facebook posts, photos, and videos, of a “huge train derailment by Black Rock, 100 yards from my house,” and offered a “sinkhole [under tracks] update on the train derailment by Black Rock.” [5, 8]  At the site of the former Panhandle Smelting and Refining Company, which ran sporadically as a lead and silver smelter for local mines from June 1907 through March 1909, and was salvaged and dismantled in December 1922:

Not much remains today, except crumbling foundation walls, brick piles, and a large outcrop of smelter slag – locally known as “Black Rock.”  Because of past smelting activity, the soil in this area contains high levels of lead and other metals [15].

Visitors along the Pend Oreille Bay Trail, which the surrounding cities of Sandpoint, Ponderay, and Kootenai and Friends of Pend d’Oreille Bay have overseen for years, “to provide safe public access to the lake,” encounter caution signs on trail gates warning them to “not let children play in the dirt,” “wash your hands…before eating, drinking, or using tobacco products,” and “stay out of dusty areas,” to avoid the health problems caused by lead poisoning, such as compromised development, attention, and learning capacity [15].

A federal grant, awarded to a brownfields assessment coalition of city, county, and state agencies, to study and clean up the environmental contamination of the Black Rock area, has not deterred the 1,138 mostly frugal, Ponderay citizens from their closest access to Lake Pend Oreille, at the landmark, smelter slag cliff and toxic sludge beaches [16, 17].  WIRT activists wonder if Burlington Northern Santa Fe and Montana Rail Link recently compounded, with their derailment and mitigation, the social and environmental injustices already rampant among the working poor in the three-square-mile “Little City with the Big Future” and the highest crime rate in Idaho.

Railroad companies know that the coal dust they profusely shed from their unit coal trains clogs ballast pores, causing saturated, shifting rock foundations beneath tracks under heavy trains, especially during rapid winter snowmelt and intense spring rains.  They are responsible for the integrity of their rail lines during both wet and dry weather.  When their infrastructure fails and unleashes a torrent of runoff that mixes with Black Rock slurry, tainting the water and bed of Lake Pend Oreille with lead and heavy metals, who will defend and protect north Idahoans living beside a further polluted, industrial waste dump?