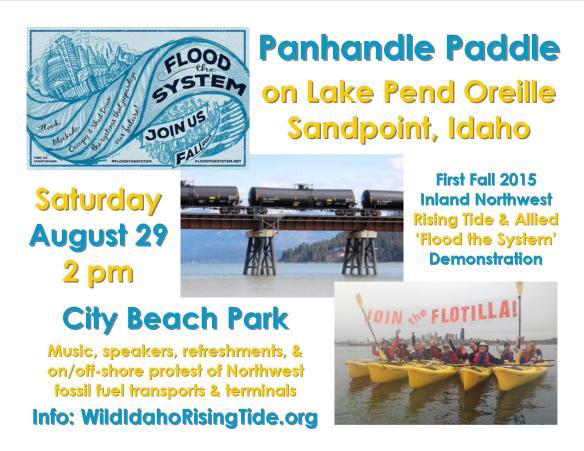 Organizing the first in a series of coordinated, region-wide, fall 2015 Flood the System actions and ongoing mobilization of frontline, inland Northwest communities impacted by fossil fuel incursions and unjust economic, social, and political conditions, Wild Idaho Rising Tide (WIRT) and allied activists in Sandpoint, Moscow, Spokane, and beyond are excited to announce and host the Panhandle Paddle on Saturday, August 29 [1]! After further WIRT outreach and education between 9 am and 1 pm at the Farmers’ Market at Sandpoint, WIRT members and friends are converging at 2 pm at City Beach Park in Sandpoint, Idaho, for music, speakers, refreshments, and on- and off-shore protests of Northwest fossil fuel transports and terminals and rail bridge expansion on Lake Pend Oreille. In the wake of four Flood the System slide shows and discussions in Idaho and Washington and parallel Montana initiatives, we are eager to “flood, blockade, occupy, and shut down the systems that jeopardize our future” [1-3].

Join in some summer fun on the water and beach to show Big Oil, King Coal, their railroad industry haulers, and government facilitators that north Idahoans will not stand for their reckless endangerment of our lives, communities, water, air, and climate, with their explosive Alberta tar sands and Bakken crude oil trains and their heavy, dusty Powder River Basin coal cars. Northwesterners have plenty to celebrate about our shared resistance, as dozens of proposals for new and expanded fossil fuel infrastructure falter and fall [4]. Please participate in these Panhandle Paddle activities:

Sign Preparation Party: RSVP and meet near the Statue of Liberty at City Beach Park after 4 pm on Friday, August 28, to construct and create huge banners and attractive signs that participants can hoist from watercraft or the beach and that observers can see at great distances.

Palouse Area Carpool: Gather by 11 am on Saturday, August 29, in the parking lot beneath the Rosauers sign at 411 North Main Street in Moscow, Idaho. Panhandle Paddle activists could return to the Palouse region by 7 or 8 pm or later that evening, depending on carpooler arrangements.

Please respond to WIRT with your event watercraft rental intentions, so we can cover some of this equipment availability and cost for participants.

Grassroots Climate Activism Support: Can you donate toward watercraft rental fees or offer gear or supplies for this event? Could you contribute your inspiring words and/or melodies or delicious snacks and beverages? Would you drive enthusiastic Panhandle Paddle participants to Sandpoint? Can your group or organization endorse and/or co-sponsor this demonstration of people power? We would love to hear from you! Contact WIRT through any of the enclosed channels, to bolster this community event or assist with our collective expenses [5].

In the mountain lake valley that unleashed the powerful Lake Missoula glacial flood waters across the Northwest, from northern Idaho through eastern Washington to the Columbia and Willamette River basins, activists could not find a more critical industry bottleneck. In the Idaho Panhandle, all West Coast-bound fossil fuel trains converge and increase risks to rail line communities. Montana Rail Link and Burlington Northern Santa Fe Railway (BNSF) carry and shed coal along Montana and Idaho Highways 200 and the north shores of Lake Pend Oreille, from the Powder River Basin in northern Wyoming and southeastern Montana. BNSF also hauls volatile, fracked, crude oil close to U.S Highway 2 in Montana and Idaho, from the Bakken shale fields of northwestern North Dakota and northeastern Montana, to Bonners Ferry, 30 miles to the north of Sandpoint. Interweaving and paralleling these BNSF tracks, the Union Pacific Railroad transports equally explosive dilbit (diluted bitumen from tar sands) near U.S. Highway 95, from northern Alberta, over the continental divide (where one of these trains wrecked last winter), across southeastern British Columbia into the United States near Eastport, Idaho, and south through Bonners Ferry and Sandpoint.

All fossil fuel trains traveling across the four-state Northwest to expanding and emerging refineries and export facilities in British Columbia, Washington, and Oregon must file through the “Funnel,” the conjunction of these three rail lines in downtown Sandpoint and through Spokane, 75 miles to the southwest. Sandpoint, the Lake Pend Oreille and Dover rail bridges, and downtown Spokane all stand as challenging bottlenecks before dirty energy trains fan out downstream, like the glacial Lake Missoula floods, across the eastern Washington scablands and the Columbia River Gorge.

Among thousands of Panhandle residents who understand and denounce the dangers of extreme energy transport through their cherished places, we together hold the capacity to greet every one of the two dozen weekly coal and oil trains with resistance. Until such diligence arises, WIRT anticipates a mass, bridge-focused, land- and water-based display of regional opposition to dirty energy corporations invading wild and rural lands and waters with their tar sands, oil, and coal exploits and subsequent climate contamination.

[4] The Thin Green Line Is Stopping Coal and Oil in Their Tracks (August 13, 2015 Sightline Institute)