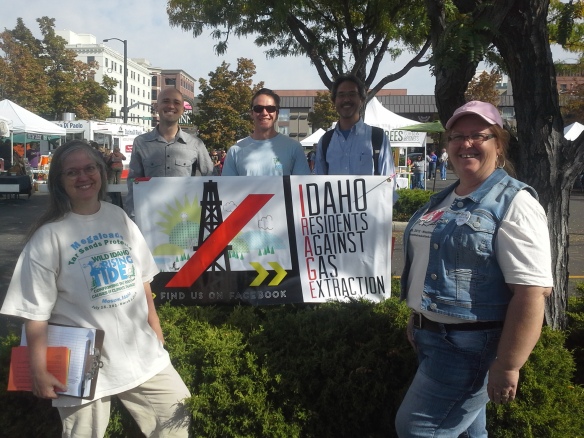 In conjunction with the Global Frackdown worldwide day of action on Saturday, October 11, Idaho Residents Against Gas Extraction, Palouse Environmental Sustainability Coalition, Wild Idaho Rising Tide, and other groups and individuals arranged and supported Global Frackdown Idaho for a third year in Boise and for the first time in Moscow.  To publicly oppose fracking, concerned citizens and climate justice activists from across Idaho converged and staged demonstrations, calling for a ban on looming first fracking in Idaho and around the Earth.  In response to state and local policy makers and administrators and in solidarity with harmed communities and wrongfully jailed and hunger-striking Idaho fractivist Alma Hasse, protesters gathered with family, friends, neighbors, signs, and banners at the Boise and Moscow farmers markets.  Event coordinators provided verbal descriptions and printed information about the current state of oil and gas development and resistance in Idaho, as they circulated and signed a petition to state officials and considered a ballot measure, to ban fracking, waste injection wells, and all toxic oil and gas practices statewide.  At both events, participants expressed their outrage over government complicity with industrial harms to shared air, water, climate, and community, as they demanded that Idaho officials secure a future powered by clean, renewable energy, not by dirty, polluting fossil fuels that poison people and the planet.