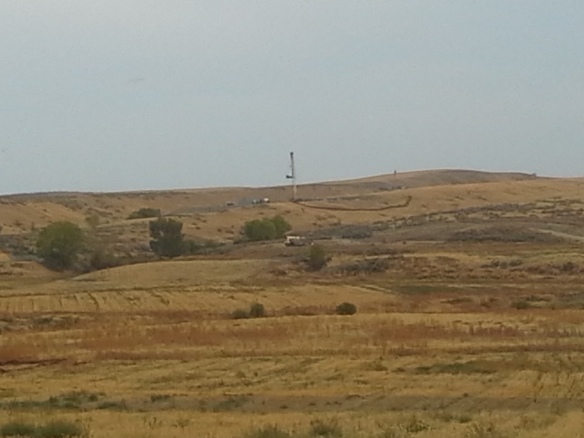 On Wednesday, October 15, 2014, beginning at 9:30 am MDT, the Idaho Board of Land Commissioners will offer oil and gas leases of state lands and sub-surface mineral rights for sale to the highest bidder, at a public auction in the Idaho Department of Fish and Game Trophy Conference Room 101, at 600 South Walnut Street in Boise, Idaho [1]. The Idaho Department of Lands (IDL) periodically conducts these auctions and administers subsequent leases, with oversight and approval of the Land Board.  The 12.5-percent royalty derived from extracted oil and gas raises funds from lands held for the public trust and state wildlife and transportation departments and for specified beneficiary institutions through the state endowment trust.  Of the 11 tracts in Cassia, Gem, and Owyhee Counties, 600 acres in Cassia County and 160 acres in Gem County constitute state lands, while the nine parcels totaling 4,479 acres located in Owyhee County involve split estates of private landowners and state mineral holders [2].

Minimum, competitive bids by drilling companies at the oral auction open at only $0.25 per acre for the 5,279 acres available for leasing [3]. Successful bidders must pay their bid and the first year’s annual rent of $1.00 per acre for leases lasting up to ten years.  If these leases are not drilled or productive, IDL assesses additional drilling penalties of $1.00 per acre per year starting in the sixth year.  The state requires a $1,000 bond for exploration on each lease, which increases to $6,000 prior to drilling, in addition to a drilling permit bond issued by the Idaho Oil and Gas Conservation Commission.  Before entry on state lands for seismic exploration, companies must acquire IDL permits costing $100 per mile across contiguous tracts or a minimum of $100 per section.

At the last of several state lands and minerals auctions in Boise, on April 17, 2014, activists raised concerns about drilling under rivers and fossil fuel effects on climate change, demonstrating outside IDL headquarters and quietly occupying the auction room filled with gas company executives and attorneys who bid more than $1,148,435 to the state of Idaho [4]. The Idaho Department of Lands leased 17,700-plus acres for oil and gas drilling, including 1,415 acres of state public trust lands and minerals under or adjacent to Boise, Payette, and Snake river beds.  AM (Alta Mesa) Idaho of Houston, Texas, and Trendwell West of Rockford, Michigan, paid an average of $76 per acre for the 150  tracts in Ada, Canyon, Gem, Owyhee, Payette, and Washington counties.  The April 17 auction doubled the previously largest amount of Idaho public lands and minerals leased in one period, bringing the total to nearly 98,000 state acres, leased for as low as $2.35 per acre on average, besides the thousands more private acres leased in six southwestern counties [5].  Eighteen drilled but capped wells, awaiting pipelines and production and transportation infrastructure currently proposed or under construction, surround the first producing well in Idaho in February 2014, on the Teunissen Dairy near New Plymouth.  The Idaho Department of Environmental Quality found toluene from drilling mud in a water well several hundred feet away in fall 2012 [6].

If the people of Idaho own these myriad acres of public trust and endowment trust state lands and minerals auctioned for oil and gas exploitation, which respectively “benefit” the general fund and public schools, how can Idahoans influence and determine how our state cares for these shared resources? Allowing the same agency – the Idaho Department of Lands – to both regulate and lease oil and gas development on state holdings seems like a conflict of interest, especially because the Oil and Gas Conservation Commission that oversees industry regulation is politically appointed and receives a 1.5-percent severance tax on oil and gas production for its “responsibility.”  At least Idahoans can vote out of office the state’s highest elected officials on the Land Board, for leasing and selling off our precious but subsequently impacted lands, resources, and waterways for bargain prices.

Because the last five years of frenzied oil and gas rule-making, legislation, exploration, and drilling, centered primarily in Payette County and the Boise halls of government, represent industry’s first forays into Idaho’s still relatively pristine and thus increasingly valuable watersheds, the time has arrived for communities across the state to organize resistance to looming drilling, fracking, and acidizing of oil and gas wells. Historic and current fossil fuel development in the state infer that major portions of Idaho are ripe for extreme energy extraction and could eventually suffer in the boom-and-bust crosshairs of dirty energy corporations [7].  Please participate in one or more of these opportunities for citizen protection of our clean air, water, and lands:

1) Join the auction protest of these state leases, converging at 8:30 am MDT on Wednesday, October 15, outside the Idaho Department of Fish and Game at 600 South Walnut Street in Boise.  Organized by Idaho Concerned Area Residents for the Environment (ICARE), Idaho Residents Against Gas Extraction (IRAGE), Wild Idaho Rising Tide (WIRT), and allies, this frontline demonstration affords various roles that will display collective citizen disapproval of our state government allowing oil and gas companies to utilize our public lands and waters as dumping grounds for the predictable, toxic aftermath of extraction profits.  Bring your protest signs, family, friends, co-workers, songs, and spirit of solidarity with communities devastated by fossil fuels.  Park in the MK Nature Center lot south of the Fish and Game building, and contact ICARE, IRAGE, and WIRT to discuss event logistics [8, 9].

2) Coordinate statewide protests at Idaho Department of Lands offices on the holiday or business day before this auction, Monday or Tuesday, October 13 or 14.  Like the June 4 to 7, 2013, Stop the Frack Attack, Idaho! actions across the state, we are encouraging and instigating demonstrations outside IDL offices at Bonners Ferry, Coolin, Sandpoint, Coeur d’Alene, Kingston, Saint Maries, Deary, Kamiah, Orofino, Craigmont, McCall, Jerome, and Idaho Falls [10, 11].  Recruit your friends, family, and neighbors, wield your protest signs, banners, and chants, engage in grassroots public participation by sharing your thoughts with agency personnel, and take plenty of photos and videos to share with Boise IDL staff!  Oil and gas development could soon be coming to the Grangeville area and southeastern Idaho [12, 13].  Please reach WIRT at 208-301-8039 or wild.idaho.rising.tide@gmail.com, for further information.

3) Sign the petition addressed to Idaho Governor Butch Otter, entitled Protect Idaho’s Water [14].  It requests independent baseline testing of all bodies of water near state lands and minerals prior to their leasing by the Idaho Department of Lands to the oil and gas industry.  To expand Idaho citizens’ right to knowledge of lands planned for auction, engagement in leasing processes, and stringent water protections, the state should make available to the public this water quality data and comprehensive maps of pending leased parcels, before any auction of state lands and mineral rights for fossil fuel development.

4) Test your well water before any oil and gas drilling activities, if you live or do business in leased areas.  Because such water quality data must be legally defensible, withstanding potential industry attorney challenges, a certified water collector should do the sampling, thereby ensuring a strong and transparent chain of custody.  Contact Alma Hasse and Tina Fisher of ICARE and IRAGE, who can guide you through this process.  If you pool four to eight neighbors for water well testing within a zero- to three-mile radius of looming drilling, ICARE can cover the $35 hourly rate for a technician.

5) Arrange meetings among your neighbors, co-workers, family, and friends for presentations and discussions with ICARE, IRAGE, and WIRT activists about oil and gas development in Idaho and other states more severely affected by industry inroads.  Local organizers can answer your questions and talk with you over coffee or iced tea.

6) Explore information on the IRAGE and WIRT facebook and website pages, join these community groups, and share this action alert with concerned citizens around the region.  WIRT will periodically release more updates about Idaho oil and gas incursions and resistance in upcoming newsletters.