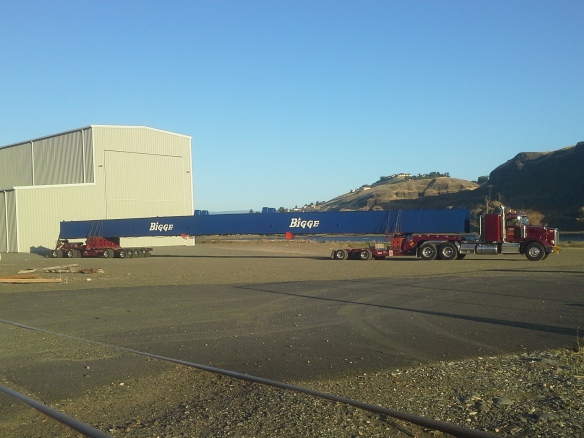 On Thursday, July 24, two Wild Idaho Rising Tide (WIRT) activists scouted the Port of Wilma, across the Snake River from Clarkston, Washington, to document with photos and ascertain any changes at the fenced compound where Bigge Crane and Rigging stores the last of three rusty, cylindrical, hydrocracker sections stranded since mid-December 2013.  Participants in the Nez Perce Environmental Summit on Saturday, July 19, discovered the two other, larger, megaload parts vanished, with crews still in the port lot leased by Omega Morgan in late 2013, for its two massive evaporator cargoes [1].  Last observed on short, 12-axle trailers at the port on Tuesday, July 15, the two heavier, missing loads, 573,000 and 661,000 pounds each, likely departed by barge downriver or by train on the Watco Companies Great Northwest Railroad to the Tri-Cities, Washington [2].  According to late-May newspaper articles that suggested megaload rail travel, haulers could have transported the shipments on Schnabel train cars as oncoming traffic to potentially explosive, West Coast-bound, unit “bomb trains” of fracked Bakken shale oil.  The behemoths could currently be moving across eastern Washington and northern Idaho on either Union Pacific or Burlington Northern Santa Fe rail lines to Bonners Ferry, Idaho, then eastward on the BNSF railroad to a spur line heading south from Shelby to the Montana Refining Company in Great Falls.  The hydrocracker column formed by stacking the three purportedly irreducible components upright constitutes equipment essential to tripling Calumet Specialty Products Partners’ refinery production of Alberta tar sands, Bow River crude, and Bakken shale oil.

Activists noticed on July 19 that heavy hauler Bigge had left a white and red crane, a heavy-duty, white semi-truck, a small, orange truck, several flatbed trailers, and some white trailer pieces resembling the steel suspension systems seen around other, huge, fossil fuel contraptions in the region since February 2011.  The San Leandro, California-based company also abandoned the 504,000-pound, lightest, bottom part of the hydrocracker.  Its largest diameter of the three modules may have deterred its passage by train through tunnels, close, two-way tracks, or other rail line impediments, while its weight and length, when combined with interlocked trailers and trucks, could forebode the heaviest and longest megaload to ever traverse rural northern Idaho highway routes.  On Thursday evening, July 24, WIRT comrades saw additional Bigge gear that alerted them to imminent megaload movement, perhaps within a week.  A second, white semi-truck occupied the southwestern corner of the lot, while the orange truck, previously parked next to the hydrocracker piece, sat behind it, attached to the white trailer.  Absent during prior scouting forays, long, dark-blue, trailer sections loomed in front of the module, and a colossal, dark-blue, metal bar on a specialized semi-trailer, like the top of megaload lifts seen at the Ports of Pasco and Umatilla, crowded the eastern pavement outside the fence, along with a uniformed security guard in an older, white and red pickup truck.

This gargantuan vestige of fossil fuel infrastructure, presently assembling its impending threats of environmental and climate chaos at the Port of Wilma, could soon maraud under cover of darkness the Lewiston grade, U.S. Highway 95 through Moscow, the almost two-mile span of Long Bridge to Sandpoint, and the federally designated Pend Oreille Scenic Byway encompassing Idaho Highway 200 to Montana [3].  Wild Idaho Rising Tide anticipates new information about all three megaloads, when the Idaho Transportation Department (ITD) transmits public records to WIRT by July 31, after previously and recently violating state laws with non-response to citizen inquiries about these transports.  Meanwhile, WIRT climate justice activists are calling on all comrades, tribal allies, and supporters across the Northwest to remain vigilant of these megaloads on regional rivers, rails, and roads, especially around the Port of Wilma and the railroad funnels in and between Spokane and Sandpoint.  Prepare your spirit of resistance to stand in solidarity with your community and comrades who could risk arrest against these monsters, defending the people, places, and planet harmed by ongoing, senseless addiction to expanding extreme energy extraction and transportation.  ITD and local media will probably provide little advance public notification of megaload launch, as witnessed by the last two transports essentially disappearing unheralded downriver.  Please do all that you can to monitor, report, protest, and halt these intruders of a global, clean energy future.

See you soon in the streets!