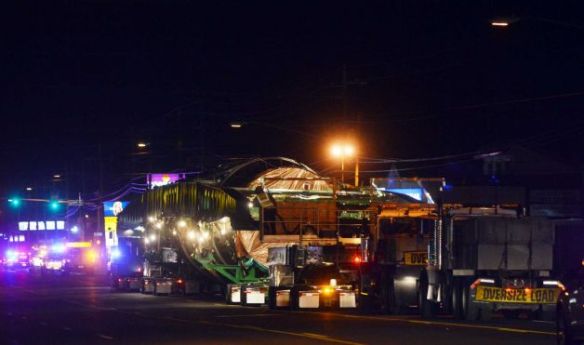 Fighting repeated delays and protests, the first of three controversial “megaloads” finally left the Port of Umatilla Monday night with massive equipment bound for the oil sands of Alberta, Canada.

The shipment was scheduled to leave Sunday, but climate activists from across the Northwest effectively blocked its path during an active demonstration inside the port industrial park.

Two protesters – Leonard George Higgins, 61, and Arnold George Schroder, 35 – were arrested after they locked themselves onto the enormous rig using a heavy steel tubes known as “black bears.” It took police two hours to remove the men, and by the time they finished it was 11:30 p.m.

Higgins and Schroder were booked into the Umatilla County Jail, Pendleton, on misdemeanor charges of disorderly conduct and released Monday. But the action lasted long enough for industrial transporter Omega Morgan to stall the first leg of its route through Hermiston.

The megaload was also delayed a week ago, when the company said it took longer than expected to secure the vessel onto trucks. It was permitted by the Oregon Department of Transportation to leave as early as November 24, but the company decided to wait until after Thanksgiving weekend.

A team of security and law enforcement worked Monday to ensure the 22-foot-wide, 376-foot-long, 901,000-pound load departed on schedule. It left shortly before 8 p.m., which furious protesters felt was in violation of the ODOT permit.

Omega Morgan is only allowed to travel between 8 p.m. and 6 a.m., and must use extended parking pullouts during restricted daytime hours, according to the permit. It is also required to pull over at regular intervals to allow traffic to pass.

From Hermiston, the convoy will work its way south on Highway 395 and east on Interstate 84 into Pendleton. It will then head south again through the John Day Valley and east across state lines into southern Idaho. Only the first portion of the trip was completed by press time.

The route across Eastern Oregon was chosen after previous megaloads faced stiff opposition through the Nez Perce Reservation and a federally designated scenic river corridor on U.S. Highway 12 in Idaho. A federal judge ordered the loads to stop using the highway in September, a month after numerous protesters there were arrested attempting to block the road.

Yet the new course has so far proven no less contested. About 50 protesters representing grassroots environmental groups, as well as several members of the local tribes, arrived to speak out against the megaloads and climate change.

“Every time you assert a community’s right to control what happens on their land, and the way their resources are used, that’s a victory and it sends a message,” said Stephen Quirke with the Portland Rising Tide activist group. “You can’t treat the environment like an object. We need to hear that message.”

Once the shipment appeared ready to hit the road Sunday, the group crossed into the shipment’s lot with their signs and chanted, “No tar sands on tribal lands!” Higgins and Schroder were then able to lock onto the truck as officers moved the crowd back off of private property.

While some tribal members protested and sang songs of prayer for the land, the Confederated Tribes of the Umatilla Indian Reservation had no official government representation. The Board of Trustees has opposed ODOT’s decision to permit the megaloads due to a lack of consultation, based on laws governing state-tribal relations.

Spokesman Chuck Sams said they are still in discussions with ODOT and the governor’s office on proposed megaloads movement, though the protests do not necessarily reflect their government’s interests.

Tribal member and teacher Linda Sampson, of Pendleton, said the load’s Oregon route runs entirely on lands ceded in the Treaty of 1855. The concern, she said, is both the lack of consultation and potential for damage to the environment.

“This can’t be a major corridor through our land,” Sampson said. “If everybody else says no, why are they coming through our country?”

Trip Jennings, organizer with Portland Rising Tide, said protesters will be back every day Omega Morgan attempts to move the equipment. Additional megaloads are scheduled to leave from Umatilla on the same route sometime later this month and in January.

Drivers can expect delays of up to 20 minutes as the megaloads pass through the area. Updates and current locations are available online http://www.TripCheck.com.