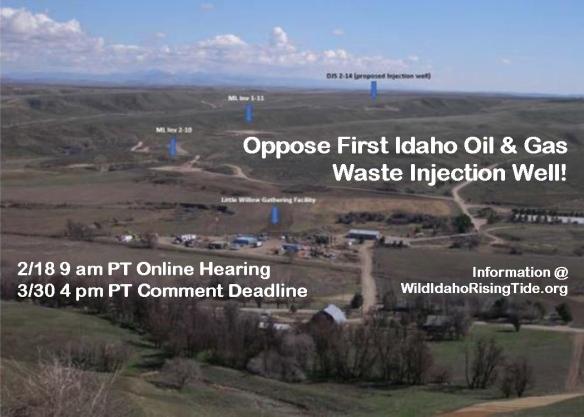 On Friday, January 14, 2022, the Region 10 water division of the U.S. Environmental Protection Agency (EPA) in Seattle, Washington, issued public notice of a draft permit (ID-2D001-A) for an underground injection control (UIC) well application, authorizing the first Class II oil and gas waste well in Idaho, in the Willow Sands gas field in Payette County.  As also requested by the project applicant, Snake River Oil and Gas (SROG) of Magnolia, Arkansas, the EPA released a proposed record of decision for exemption of the aquifer surrounding the well from its current designation as an underground source of drinking water (USDW) [1-8].

The EPA notified local communities and tribal and state governments that it had opened a 45-day public comment period on this debacle, which concludes on March 30 and offers a public hearing via teleconference on Friday, February 18 [2].  It delivered the public announcement via electronic mail, for publication in the Independent Enterprise and Idaho Statesman, and to officials of the Shoshone-Bannock Tribes of the Fort Hall Reservation, the U.S. Fish and Wildlife Service, the Idaho departments of environmental quality, geological survey, historic preservation, lands, and water resources, the governor’s office, the nearby cities of Fruitland, New Plymouth, and Payette, Shelly Brock of Citizens Allied for Integrity and Accountability (CAIA), and Richard Brown of SROG.

These two EPA actions require public resistance and input via two sets of email comments, a remote public hearing, and any creative actions that arise.  The EPA plans to allow SROG to convert the existing, abandoned, DJS 2-14, hydrocarbon extraction well, located approximately five miles north-northeast of New Plymouth, into a Class II injection well, for dangerous disposal of fluids between depths of 4,900 and 5,500 feet.  In this well, SROG could commingle waste “waters” brought to the surface at its two dozen mostly conventional, oil and gas production wells in the Treasure Valley, with fluids not classified as hazardous waste from its gas plant operations.  Purportedly, “claystone confining intervals” would separate injected fluids from surrounding, shallow, drinking water aquifers.

The EPA also proposes to approve a drinking water aquifer exemption for approximately 269 acres within the injection zone of this Class II well, in the hills east of Little Willow Creek and Road and north of the Payette River and its floodplain, a few miles upstream from their confluence with the Snake River.  The federal agency has determined that this aquifer contained by several faults does not currently, and cannot in the future, serve as a source of drinking water.  However, within the 24 square miles (15,360 acres) surrounding the proposed waste injection well, multiple water wells presently provide potable and irrigation water.  (See the posted, southeast-facing photograph showing the highest-elevation, DJS 2-14 waste well, the closest, illegally acid-fracked, ML Investments 1-11 gas well [9], the lower, ML Investments 2-10 gas well, and the valley-bottom, Little Willow gas gathering facility, and an aerial map depicting the aquifer exemption boundary with yellow lines and existing water wells with light-blue dots [3].)

Regulating Class II injection wells after assuming authority over that program from the state of Idaho several years ago, the EPA cannot issue UIC permits under Part C of the Safe Drinking Water Act, if subsurface waste injection endangers underground sources of drinking water.  Accordingly, the EPA and SROG require impacted aquifer exemption to advance these otherwise prohibited, Class II injection well decisions and activities.  The fifth most seismically prone state of Idaho banned inherently risky, oil and gas waste injection wells in 1985.  But against strong public opposition, the EPA approved a 2018 rule change that transferred authority for permitting these wells, as requested by the Idaho Department of Water Resources, from the state to the federal agency, ostensibly overriding the ban and facilitating this controversial practice [6, 8, 10].

In oil and gas producing regions throughout the continent, hazardous oil and gas waste injection wells have caused well-documented, devastating, surface and ground water contamination and induced and increased seismic incidents, including extensive earthquake clusters many miles from these wells that have inflicted property damages, insurance claims, and lawsuits.  As Citizens Allied for Integrity and Accountability (CAIA) warns, “This method for disposing of oil and gas waste, while notoriously hazardous, presents an even greater risk when promoted through the use of ‘legacy’ wells.  Steel and cement casings have a long history of failing over time, allowing toxic fluids to migrate into drinking water aquifers and to the surface, where they can poison streams, rivers, irrigation systems, and critical wildlife habitat” [8].  Federal laws two decades ago exempted many oil field operations and wastes, such as drilling fluids, produced water, and hydraulic fracturing (fracking) fluids, from the environmental and hazardous waste regulations that govern other businesses.  Moreover, the historically understaffed and often politically repressed EPA lacks capacities to adequately inspect, document, and enforce oil and gas operation violations [11].

Oil and gas extraction wells and looming waste injection wells in Payette County have already degraded and could continue to negatively impact the critical air and water resources and public and environmental health and safety of multiple generations of Idaho residents and downstream, Columbia River basin communities.  They jeopardize aquifers, watersheds, wildlife habitat, public and private lands and their values and uses, local agricultural, recreational, and business economies, and public funds and resources.  As CAIA describes Class II well threats in their recent newsletter and media release, this well permit and aquifer exemption would authorize SROG to inject massive volumes of high-pressure brews of radioactive, chemical-laden, carcinogenic, industrial waste byproducts deep underground, directly through precious, irreplaceable, drinking water aquifers.  “With Idaho’s burgeoning population, rising temperatures, and historic drought exacerbating the strain on mostly unconfined and already depleted aquifers, the thought of sacrificing any existing water resources to an industry whose only goal is to exploit our natural resources for corporate profits, and who has already cost Idaho taxpayers far more to operate than it has returned in severance taxes is abhorrent” [4, 6].

Representing CAIA and exploring with them various avenues to challenging these proposals, attorney Brian Ertz of Ertz Johnson Law Firm in Boise further stated that, “Regulators have provided inadequate assurances that the poison operators propose to pump into the ground will not spill, leak, and leach into bodies of water Idahoans use as sources of drinking water.  The EPA should deny the permit.  There has been inadequate study.  Contradictory and capricious claims about the geology of the proposed site, the agency’s lack of capacity to keep proper oversight, and the undeniable risk all govern against approval” [6, 8].

With plans for many more fossil fuel wells, Snake River Oil and Gas (SROG) has leased hundreds of thousands of acres for oil and gas extraction, even under public rivers and roads in southwest and eastern Idaho.  During recent months, despite the objections of statewide citizens and nearby residents forced to lease their oil and gas, SROG drilled and/or started production of three new gas wells next to the Payette River and under the City of Fruitland water intake plant.  For years, the company has asserted that the Class II well disposal method is their only, imperative option for cheaply depositing a constant stream of hazardous waste produced by their operations [4].  SROG currently trucks its produced water to evaporation ponds in Kuna, not far from a state prison and the Boise airport and metropolitan air shed.  State regulators and industry representatives have downplayed the risks of Class II wells and offered questionable assurances about their measures to prevent pollution, damages, and their costs, ultimately borne by Idaho taxpayers when inadequate state bonding programs for production and injection wells predictably fail.

Citizens Allied for Integrity and Accountability (CAIA), Wild Idaho Rising Tide (WIRT), and regional, allied organizations have been anticipating, preparing for, and commenting on government proposals leading to this situation since at least 2012, including gathering signatures on a September 2014, informal, public petition demanding bans of fracking well treatments and oil and gas waste injection wells in Idaho, which we encourage you to sign by March 29 [10, 12, 13].  Please see the CAIA newsletter for links to three excellent information sources on the dangers of oil and gas waste injection wells, which can assist your public input [4].  Read the proposed well permit, draft aquifer exemption record of decision, and an associated fact sheet at the EPA website, where you can also find phone attendance instructions on the morning of the February 18 hearing [1, 2].  Due to the COVID-19 pandemic, the EPA is neither providing physical document copies for review nor accepting hardcopy mail.

Join and support CAIA and WIRT in insisting that the EPA reject this first Idaho permit application for a Class II injection well and surrounding aquifer exemption, by participating in oral testimony collected by the EPA at a public meeting held via teleconference, scheduled to begin at 9 am PST/10 am MST on Friday, February 18.  We also invite you to not only comment in writing to the EPA by the close of the 45-day comment period at 5 pm MST on Wednesday, March 30, but to also request a 30-day comment deadline extension, due to COVID-19 difficulties and especially the Idaho precedence of these EPA decisions.

Send your two separate email statements on the injection well application and aquifer exemption to Evan Osborne of the EPA at osborne.evan@epa.gov, including in your subject line either “Draft Permit Public Comment” or “Draft Aquifer Exemption Public Comment.”  In your message, enclose relevant facts and your personal concerns about these issues, specific requests for a comment period extension and inclusion of your remarks in the public record for draft permit ID-2D001-A, and your name, address, and phone number.  Contact CAIA or WIRT for additional information, or Mr. Osborne at 206-553-1747, with your technical questions, disability accommodation requests, or commenting obstacles.  Thanks for your every effort to protect regional air, water, and climate from fossil fuels pollution!