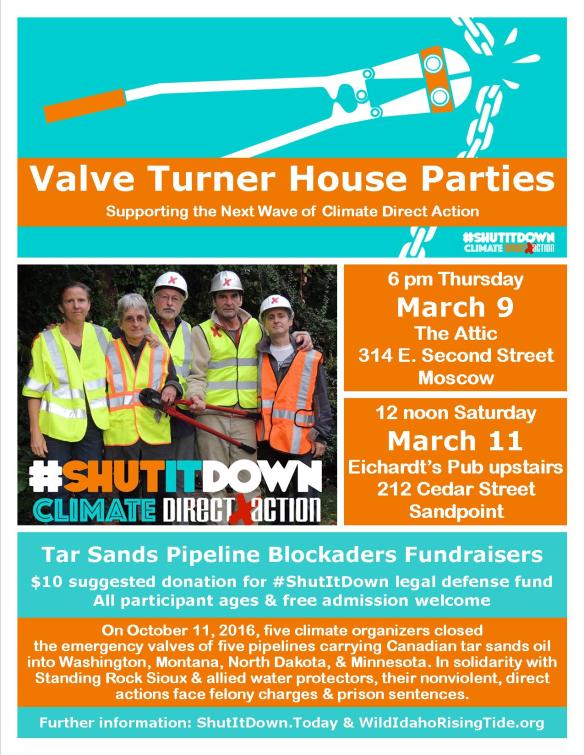 Inspired by the “valve turners’” bold and decisive actions that shut down pipelines flowing from Canada to the primary tar sands market, America consumers, Wild Idaho Rising Tide (WIRT) is hosting public house parties in Moscow and Sandpoint, to support these blockaders’ legal defense funds and to elevate conversations about rising to the challenges of this critical, historic moment [1].  In this era of a federal fossil fuel administration, building stronger communities of climate dissidents preparing for the next wave of direct actions is more crucial than ever.  So please join us at 6 pm on Thursday, March 9, at The Attic, up the back stairs of 314 East Second Street in Moscow, and/or at 12 noon on Saturday, March 11, in the upstairs room of Eichardt’s Pub at 212 Cedar Street in Sandpoint.  We welcome all participant ages and concerns at this Shut It Down – Climate Direct Action fundraiser requesting $10 suggested donations with free admission.

On October 11, 2016, five brave climate activists closed the emergency shut-off valves of five major pipelines carrying Canadian tar sands oil into Washington, Montana, North Dakota, and Minnesota.  In solidarity with Standing Rock, Cheyenne River, and other Lakota nations and allied water protectors at resistance camps invaded by police, their nonviolent civil disobedience together stopped 15 percent of a day’s U.S. crude oil imports.  Now these activists and four accompanying documentarians are facing multiple felony and misdemeanor charges with maximum, potential, prison sentences ranging from 10 to 81 years.  Beyond some pro bono legal help, the group has had to hire several lawyers and needs to raise $50,000 to cover legal, trial, and travel expenses, as they tell their stories about urgent climate action.

Before setting out to cut chains and locks and block pipeline valves across the country, the tar sands valve turners – Annette, Emily, Ken, Leonard, and Michael – and their support crew – Ben, Reed, Sam, and Steve – were not specially trained activists.  They are just ordinary people with the strength of their convictions and the courage to act on them.  But their example, along with similar skills and practices, show how people rightfully concerned about climate catastrophe can stand up and take serious action in a time of denial and a world of “alternative facts.”  With the fossil fuel industry now not only controlling governments at every level in the U.S., but also holding positions of power within them, we all need to support folks already taking big legal risks and to move ourselves to that next step, by truthfully, assertively acting to halt the fossil fuel sources of climate cataclysm and our collective crimes against future generations.

During the last weekend in February, Shut It Down – Climate Direct Action and allies organized the first, experimental round of house parties, meeting with friends to raise funds to help the valve turners in Bellevue, Washington, Brooklyn, New York, Burlington, Vermont, Hanover, New Hampshire, and Houston, Texas.  Please gather with us at these fun events, held by dozens of groups across the country, introducing you and your friends, family, and colleagues to powerful climate direct action, and sharing the work of Shut It Down and WIRT.  We will provide valve turner videos and information about how to stage and live stream adventurous and effective actions.  For further event and co-host information, see ShutItDown.Today and WildIdahoRisingTide.org and contact us with your questions.

On Saturday and Sunday, December 3 and 4, 2016, Shut It Down, WIRT, and allied activists welcomed Leonard Higgins in person in Sandpoint and Moscow, and Michael Foster, Emily Johnston, and Ken Ward (but not Annette Klapstein) via Skype in Moscow, while Leonard was reaching out to inland Northwest communities and traveling with his partner Angela van Patten to his first court hearing in Montana, where he faces up to ten years in prison [2-4].  Greatly admiring their brave actions urging rapid transitions away from fossil fuels to a sustainable energy economy, forum participants expressed their gratitude and respect for the heroic team, as they eagerly listened and learned why the valve turners felt morally compelled to take great personal risks through nonviolent direct action to avert climate cataclysm.

In the first of five lawsuits against the tar sands pipeline valve turners, a Skagit County, Washington, jury deliberated their verdict on the felony burglary and sabotage charges of Ken Ward during three days in late January and early February 2017.  Acknowledging the threat of climate change, these citizens of a hung jury refused to convict him of his admitted, well-documented act of civil disobedience.  Ironically, only seven weeks after his valve turner action, Canada approved doubling the climate-wrecking carbon volume of Ken’s target, Kinder Morgan’s Trans Mountain pipeline that, like explosive tar sands trains, carries tar sands to northwest Washington refineries for American consumption.  Judge Rickert will again preside over Ken’s re-trial scheduled for May 1, when valve turners will try once more to present a necessity defense to the jury.

After visiting Idaho activists and before his Missoula talk, Leonard Higgins attended his arraignment hearing on December 6, 2016, at Chouteau District Court, and read a statement outside the courthouse in Fort Benton, Montana [10].  Valve turners toured California and Oregon last month, receiving tremendous support and raising funds for their legal expenses and for Standing Rock and allied resistance.  As the group plans an East Coast tour during late May, Annette, Emily, Ben, and Steve may appear for unconfirmed hearings in Minnesota in early March, and Michael Foster and Sam Jessup are connecting with communities in North Dakota, for support before their March 30 hearing in Pembina County Court.

[3] Why We Shut It Down: Sandpoint Idaho Hosts Tar Sands Valve Turners, Shut It Down – Climate Direct Action and Wild Idaho Rising Tide

[4] Why We Shut It Down: Moscow Idaho Hosts Tar Sands Valve Turners, Shut It Down – Climate Direct Action and Wild Idaho Rising Tide