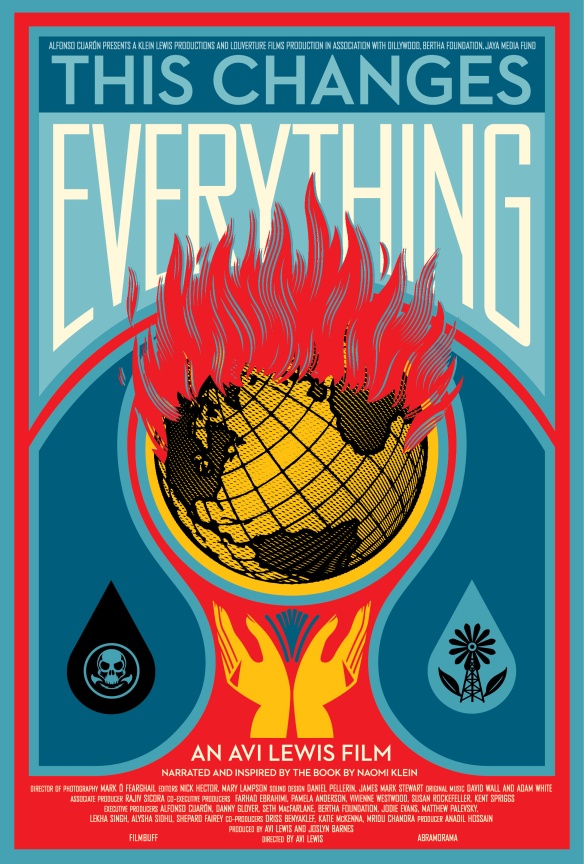 Several grassroots, northern Idaho groups are co-hosting screenings and panel discussions of This Changes Everything at 7 pm on Tuesday evening, March 29, at the Kenworthy Performing Arts Centre, 508 South Main Street in Moscow, and at 7 pm on the following evening, Wednesday, March 30, in the Little Panida Theater, 300 North First Avenue in Sandpoint [1, 2].  Inspired by Naomi Klein’s fourth, September 2014, internationally bestselling, non-fiction book, This Changes Everything: Capitalism Versus the Climate, this independent, environmental documentary directed by Avi Lewis asks, “What if confronting the climate crisis is the best chance we’ll ever get to build a better world?”

The provocative, compelling, 2015 film aims to empower, not scare, moviegoers into answering its call to action. Accessible to even the most climate change-fatigued viewers, This Changes Everything refreshes and inspires, as it reflects on the kinds of relationships and lives we have and envision, and why the climate crisis is at the center of it all.

Filmed over 211 days in nine countries and five continents during four years, This Changes Everything explores and re-imagines the epic, vast challenge of climate change.  It presents seven powerful portraits of communities on the frontlines, from Montana’s Powder River Basin to the Alberta tar sands, from the coast of south India to Beijing and beyond.  Naomi Klein’s narration interweaves these stories of struggle: “I’ve spent six years wandering through the wreckage caused by the carbon in the air, and the economic system that put it there.”

During 90 minutes, viewers meet Crystal, a young Beaver Lake Cree Nation leader in Alberta tar sands country, as she fights for access to a restricted military base, in search of answers about an environmental disaster in progress. Crystal explains that “People are starting to realize that this is no longer an Indian problem, and that’s the good thing, because they’re starting to realize that, if you drink water and you breathe air, this is about you.”

Audiences also encounter Mike and Alexis, a Montana goat ranching couple who watch a broken pipeline beneath the Yellowstone River coat their dreams in oil. They respond by organizing against fossil fuel extraction in their beloved Powder River Basin, and forming a new alliance with the Northern Cheyenne Tribe, to bring solar power to the nearby reservation.

Throughout the movie, Klein builds to her most controversial and exciting idea: That we can seize the existential crisis of climate change to transform our failed capitalist economies into something radically better. Asad Rehman of Friends of the Earth observes that, “When you see communities who are thrown into the frontline, they become stronger.  They stand up.  And you think, ‘Isn’t this incredible?  Isn’t this the society we want?’”

At the second show in Sandpoint, 350 Sandpoint, Idaho Mythweaver, Panida Theater, and WIRT co-host panelist Laura Ackerman, who works on fossil fuel transport issues for The Lands Council in Spokane, Washington, and on stopping ski area expansion into Mount Spokane old- growth forest. As an executive committee member of the Stand Up to Oil coalition keeping coal and oil in the ground, Laura will give an overview of oil and coal transportation in the inland Northwest.  Fellow panelist Gary Payton, a Sandpoint resident who works with the World Mission of the Presbyterian Church, Idaho Conservation League, and Lake Pend Oreille Waterkeeper, will address Sandpoint fossil fuel train traffic and West Coast terminals and global measures to combat climate change.