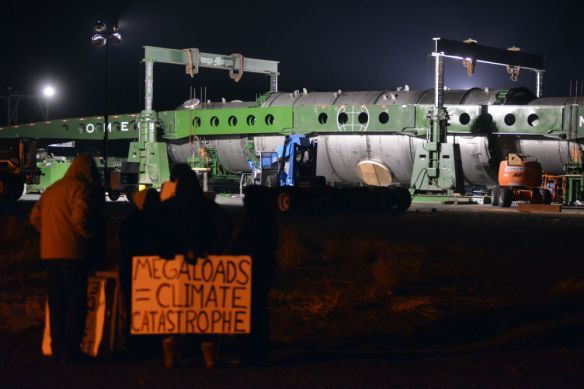 Protesters huddle in the dark out in front of the 450-ton megaload of oil refinery equipment on Monday at the Port of Umatilla (East Oregonian/E.J. Harris photo). 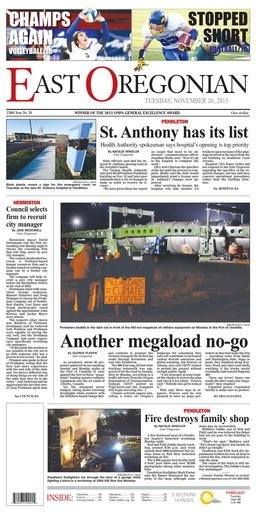 As promised, about 20 protesters gathered on toe-numbing Sunday and Monday nights at the Port of Umatilla, to rally against the first of three “megaloads” hauling massive refinery equipment into the tar sands of Alberta, Canada.

Yet the shipment never budged, sitting under towering floodlights, while workers with the Hillsboro-based Omega Morgan continue to prepare the oversize transport for its first leg south through Hermiston and east into Pendleton.

The 380-foot-long, 23-foot-wide trucking behemoth was supposed to hit the road by Sunday, then by Monday, according to a traffic advisory from the Oregon Department of Transportation (ODOT).  Instead, ODOT posted on TripCheck.com that the transport will begin traveling on December 1.

Climate activists oppose providing a route on Oregon’s highways for something they said will contribute to increased carbon dioxide emissions and global warming.  On Sunday, Jim Powers of Albany also said that ODOT rushed to permit the project without enough public input.

“A lot of people at least wanted the chance to review the plan and check it for safety,” Powers said.  “Nobody else got to look at it.”

With only three days to organize, Powers said he was pleased to have as many protesters as they had make the trip – including some from Idaho and Washington state.  Signs in hand, they huddled along Roxbury Road and later took shifts watching if the trucks would eventually start toward Highway 395.

“Save our rivers!  Spare our roads!  We don’t want your megaloads!” they chanted.

Umatilla police responded briefly to make sure no protesters trespassed on private property.  No arrests were made.

The load is only permitted to travel between 8 pm and 6 am, and no more than eight consecutive hours per night.  It will head to John Day before crossing east into southern Idaho and north through Montana en route to Canada.

Megaloads are a symbol of a much bigger problem, Powers said, as more fossil fuels are burned from the tar sands.

“It definitely makes me sad there isn’t more publicity about the problem,” Powers said.  “My children and grandchildren will be greatly harmed by this machine.”

Six members of the local Confederated Tribes of the Umatilla Indian Reservation (CTUIR) also arrived Monday to protest.  While the tribal government does not officially oppose the megaloads, it did express concerns about lack of consultation with ODOT on permitting.

CTUIR spokesman Chuck Sams previously said the tribes will continue to work with the state addressing concerns about the megaload passing through their ceded land.

Helen Yost, of the grassroots effort Wild Idaho Rising Tide, said they will continue to raise awareness of the issues surrounding climate change.  They plan to return to protest again in December, once the shipment does begin moving.

“There will not be a load that goes through Oregon that’s not protested, or without someone watching,” Yost said.

1 thought on “Another Megaload No-Go”