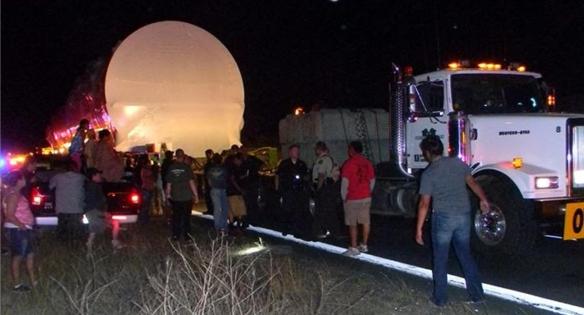 [THURSDAY UPDATE: The Nez Perce tribal community, several conservation groups, and Wild Idaho Rising Tide (WIRT) activists are staging a protest tonight, to directly confront the Omega Morgan-hauled tar sands megaload that rolled past its planned Kooskia parking stop to Highway 12 Milepost 90 in Syringa last night. Please bring your friends, family, comrades, and documentation tools described in WIRT’s original action alert and meet to carpool at either 5 pm or 6 pm PDT tonight, August 8, from the sidewalk in front of the Friends of the Clearwater office in Moscow (116 East Second Street) to the Clearwater Valley. Idaho Rivers United, Friends of the Clearwater, and Fighting Goliath are hosting a Middle Fork Clearwater Wild and Scenic River rally at 7 pm PDT, converging at 5695 Highway 12, where participants can preferably park closely together, either along or diagonally on the driveway at Highway 12 milepost 77.4, instead of in more visible, nearby highway turnouts. Tribal and allied resistance will gather in the general vicinity of the evaporator parked in the private lot of Terry and Becky Jackson, who lift the milepost 83 tram cable for megaload passage and who erected the roadside sign stating “Megaloads Keep Idaho Green $$$.” The tar sands module, which will desecrate indigenous lives, rights, waters, and lands at its destination, now occupies the traditional Nez Perce homeland, the wild and scenic river corridor, and the Nez Perce-Clearwater National Forest.]

The Nez Perce Tribe has vowed that it will continue nightly protests until it rids its reservation and ancestral homeland from the ravages of tar sands/industrial equipment and resulting ecological, social, and climate devastation.  Wild Idaho Rising Tide and Occupy Spokane are infinitely grateful that the people and places directly confronting tar sands supply routes are growing!  Please join carpools of megaload protesters from Friends of the Clearwater (FOC) and Wild Idaho Rising Tide (WIRT), sustaining our support of Nez Perce resistance and departing the sidewalk outside the FOC office (116 East Third Street in Moscow) at 8 pm on Wednesday, August 7, and Thursday, August 8.  On Wednesday, we will journey to Highway 12 milepost 38.8, the Pink House pull-off near Orofino that an Omega Morgan megaload currently occupies, and on Thursday, we will travel to other Clearwater Valley locations that the evaporator may reach.  On both and potentially successive nights, the Idaho Transportation Department (ITD) has permitted the megaload convoy to resume passage toward Alberta tar sands operations at 10 pm.  Please bring your friends and family, spirit of solidarity, protest signs and banners, video and still cameras, audio recorders, food, and beverages for the third, fourth, and perhaps many more showdowns between the heroic Nez Perce community and yet another industrial/police invasion.  WIRT will update this action alert as further opportunities for megaload opposition arise.

Over the last few nights, regional activists have supported Nez Perce and Idle No More protests of this oversize megaload interloping in the Nez Perce reservation and homeland and soon in the national forests and wild and scenic river corridors east of the reservation.  Neither the Nez Perce Tribe nor the U.S. Forest Service have granted approval of the permits issued by ITD to hauler Omega Morgan on Friday, August 2, to transport a 644,000-pound General Electric Corporation evaporator from the Port of Wilma in Clarkston, Washington, across 174 miles of U.S. Highway 12 in Idaho, through federally designated and protected public and tribal lands, rivers, and highway sections, to the Montana border.  Both demonstrations on Highway 12 have drawn hundreds of participants and have emerged as the largest and most passionate demonstrations of public outrage during the last three years of the regional anti-megaload campaign fostered by an extensive coalition of tribal, conservation, activist, and recreation organizations.  After diminishing public participation and environmental leadership on this issue since the ExxonMobil/Imperial Oil megaloads concluded their invasion of Moscow, Idaho, in March 2012, and the Tri-Cities and Spokane, Washington, in June 2012, continent-wide attention has returned to regionally shared struggles challenging industrialization of Idaho and Alberta forests and waters.