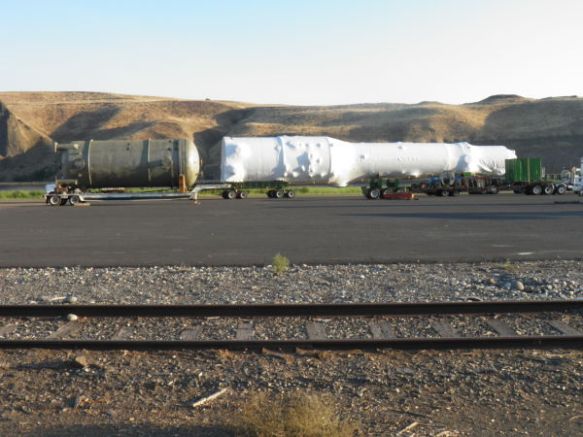 A megaload waits on Monday at the Port of Wilma (Lewiston Tribune/Elaine Williams photo).

UPDATE 11:15 pm Tuesday, August 6: The megaload is moving again, but slower than a walking pace.

Idaho State Police, Nez Perce County sheriff’s deputies, and Nez Perce Tribal Police are urging people to stay off the roadway.  Protesters are taking issue with tribal police for their role in trying to keep the megaload moving, rather than protecting the tribe and its homeland.

“That megaload is violating a court order.  Make it stop,” Lana Rickman of Lapwai shouted at police and Omega Morgan employees, as the shipment crawled along the highway.

UPDATE 11 pm Tuesday, August 6: A blockade has formed at the interchange of U.S. Highway 12 and U.S. Highway 95 east of Lewiston.  Protesters have blocked the highway and are talking with Nez Perce Tribal Police.

A megaload that is traveling east on the highway can’t get through.

UPDATE 10:30 pm Tuesday, August 6: Two groups of megaload protesters have formed in the area of Ant and Yellowjacket, just east of the U.S. Highway 12/95 interchange.

One group has formed at the parking lot at Ant and Yellowjacket, and another has formed a short distance away.  Neither group has entered the roadway.

The megaload is scheduled to travel through the corridor tonight on its way to Alberta, Canada, on U.S. Highway 12.

“This is the first of many we are organizing.  It’s not over by a long shot,” said tribal Chairman Silas Whitman.

“I think the world knows now and I know that this is the beginning.  We have been pushed as far as we can go.  There is nothing left for us but our homeland,” said Anthony Johnson, secretary of the Nez Perce Tribal Executive Committee.

(Whitman said the tribe would seek to stop the shipments with court action on Wednesday. The loads were scheduled to enter the Nez Perce-Clearwater National Forest on Wednesday night. However, the shipment stopped about halfway short of its goal of Peck on Monday night.

The Omega Morgan megaload, which left the Port of Wilma at about 10:40 p.m. Monday night, is currently parked in the median of U.S. Highway 12 and U.S. Highway 95 in the four-lane section just before the highway splits.

It arrived there at about 2:30 or 3 a.m., according to the Idaho State Police. The megaload’s Monday night/Tuesday morning trip ended shortly after law enforcement peacefully broke up a protest aimed at keeping the megaload from entering the Nez Perce Reservation.

The shipment had been expected to reach a milepost near Peck in the first segment of its road journey, but officers arrested 20 people before the convoy was able to proceed.

The ISP didn’t know if the protest played any role in the change in the schedule.

“Omega Morgan is not commenting on the protesters,” said Olga Haley, a spokeswoman for the company. “The crews are just trying to get the job done.”

Those arrested face charges of disorderly conduct, which is a tribal charge that carries a $200 bond, according to Lt. Jack McGee with the Nez Perce County Sheriff’s Office.

McGee referred questions about the seriousness of the charges, the potential penalties and court dates to tribal law enforcement. He also couldn’t confirm if those arrested were all tribal members.

Everyone who faces charges bonded out with the exception of Powaukee and Wisdom, McGee said. They have outstanding tribal warrants unrelated to the protest. McGee didn’t know the nature of the tribal warrants.

2:25 A.M. An Omega Morgan megaload has moved by protesters on U.S. Highway 12/95 at the Clearwater River Casino.

A barrier of police vehicles kept protesters away from the load as it moved eastward on the highway. Police officers had slowly been encouraging people away from the roadway prior to movement of the load.

The load appeared to continue on its journey toward Peck, where it was scheduled to stop later this morning.

1:45 A.M.: Officers with the Idaho State Police and Nez Perce County Sheriff’s Office are removing some nontribal people from the roadway.

A handful of other people have also been taken into custody by tribal police as part of the megaload protest at the Clearwater River Casino. The roadway remains blocked by a human blockade.

12:40 A.M.: Nez Perce Tribal leaders and other members stood their ground and stopped an Omega Morgan megaload in its tracks on U.S. Highway 12 early this morning.

Loud shouting, drumming and whoops rang out as the oversized shipment ground to a halt at about 12:40 a.m.

11:05 P.M.: Interim Nez Perce Tribal Police Chief Daniel Taylor said if anyone blocks the road, it is his job to uphold the law. Tribal police would have options that include asking people to leave the road, issuing citations or making arrests.

“It’s understood by our tribal leadership we have a job to do,” Taylor said.

10:30 P.M.: More than 100 people, mostly Nez Perce tribal members, have gathered near the Clearwater River Casino to await the arrival of an Omega Morgan megaload shipment that was scheduled to leave the Port of Wilma this evening.

Tribal leaders are standing at the front of the group, and have indicated they could get arrested tonight.

“We might be incarcerated. We’ve accepted that,” NPTEC member Brooklyn Baptiste said.

Whitman said tribal members “anticipate intercepting the loads at the reservation line” if they leave as scheduled tonight.

“We are tired of being pushed,” Whitman said.

Whitman and other Nez Perce Tribal Executive Committee members outlined the reasons behind their opposition during a news conference at the Clearwater River Casino earlier Monday night. They ranged from environmental justice to tribal sovereignty and solidarity with other indigenous tribes.

NPTEC member Joel Moffett said Omega Morgan “is not going to desecrate our homeland for the almighty dollar.”

“As long as they are going to try to come through our land we are going to be here to stop them,” Moffett said.

8 P.M.: At least three crew members were at the Port of Wilma just minutes ago near an Omega Morgan megaload scheduled to begin travel on U.S. Highway 12 later Monday night.

The workers, wearing yellow safety vests, appeared to be readying the controversial shipment, which is bound for Alberta, Canada.

Two uniformed security guards stood watch at the entrance to the lot where the load is parked, making sure members of the public didn’t enter.

Environmentalists, the Nez Perce Tribe and the U.S. Forest Service oppose the move, but have yet to find a way to stop it.

The department issued a news release this afternoon informing motorists on U.S. Highway 12 to expect delays of up to 15 minutes.

According to the company’s permit, the shipment can be on the highway from 10 p.m. tonight until 5:30 a.m. Tuesday and is expected to park at a large turnout at milepost 38.8 near Peck before proceeding eastward at 9 p.m. Tuesday.

The permit allows the company to be on the road from  9 a.m. to 9 p.m. Tuesday, Wednesday and Thursday. The load is expected to move into Montana on Thursday.

ORIGINAL POST: The U.S. Forest Service and shipping company Omega Morgan appear to be on a collision course.

With Omega Morgan poised to begin shipment of a megaload across Idaho on U.S. Highway 12 at 10 p.m. this evening, the federal agency again informed the company it opposes the action.

“The Forest Service does not consent, approve or otherwise authorize Omega Morgan to transport the subject over legal loads on U.S. Highway 12 between (mileposts) 74 and 174,” wrote Nez Perce-Clearwater National Forest Supervisor Rick Brazell in a terse letter to Omega Morgan President and CEO John McCalla Monday.

Omega Morgan spokeswoman Olga Haley informed the Tribune via email that the company plans to proceed with its plans. That could set up a clash not only with the Forest Service but protesters from the Nez Perce Tribe and environmental activists.

On Sunday, tribal Chairman Silas Whitman said the tribe would not stop its members from peacefully blocking the loads. Environmental activists from Wild Idaho Rising Tide announced today they would also block the shipments.

According to an Idaho Transportation Department permit and transportation plan, the Omega Morgan shipment won’t cross onto the Nez Perce-Clearwater National Forest east of Kooskia until Wednesday night.

(By Elaine Williams and Eric Barker, The Lewiston Tribune)