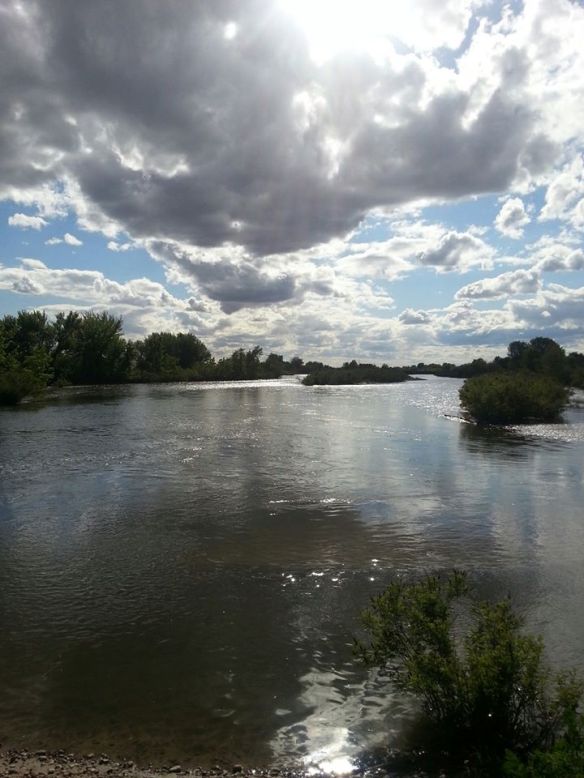 On Friday, June 7, at 3 pm, southwestern Idaho fractivists are meeting at the Idaho Department of Lands unit that houses the director and the lands, minerals, and range division, at 300 North Sixth Street near the state capitol in downtown Boise.

With the Thursday, May 30, disclosure by the Idaho Department of Lands (IDL) that Snake River Oil and Gas and Alta Mesa Services could implement “small frac jobs” on half of the eleven already drilled gas wells in Idaho, our protesting and organizing this week carries more urgency and significance [1].  Similar but smaller-scale than the risky hydraulic fracturing (“fracking”) of shale that has poisoned places like North Dakota and Pennsylvania, this dangerous blasting of porous gas reservoir rocks would permanently withdraw and pollute thousands of gallons of water from the Payette River basin.  IDL’s press release countering our media release that rallied public comments and protests also revealed that the two profiteering companies have leased tracts from IDL in the Payette River Wildlife Management Area (WMA), near the original target of our resistance, the proposed Smoke Ranch gas well on Birding Island, within the Big Willow Creek/Payette River confluence, floodplain, and wetlands.  Its well pad on private land, constructed before the public comment period closed, could provide an entry point for directional drilling into gas fields beneath the wildlife refuge, where the WMA lease prohibits surface disruption from drilling, and set a precedent for exploitation of other leased state lands along the river.

If you think that impending – and now verified – fracking in Idaho should only concern residents of Payette and surrounding counties, consider that oil and gas drilling could also soon be invading the Grangeville area and the 7,356 Bureau of Land Management acres leased near Bear Lake and Grays Lake in southeastern Idaho [2, 3].  Along with commenting against IDL permitting of the poorly-placed Smoke Ranch well, on behalf of our nearly 2000 members, Wild Idaho Rising Tide (WIRT) and our allies are coordinating protests at IDL offices throughout the state, during the Stop the Frack Attack Week of Action on June 3 to 9 [4, 5, 6, 7].  We are staging Stop the Frack Attack, Idaho! demonstrations and a strategy meeting on Tuesday through Friday, June 4 to 7, in northern, north-central, and southwestern Idaho [8].  Please bring your friends, family, and neighbors and fracking/drilling protest signs, banners, and chants, join fellow concerned citizens at these statewide demonstrations, and take plenty of photos and videos to later share with IDL!  If participating from Moscow, meet at the WIRT Activist House.  Please contact WIRT for further information about the following schedule.

Departing Moscow at 1 pm for a Coeur d’Alene demonstration at 3 pm, we will also protest at 4:30 pm in Saint Maries on the way home, if Moscow, Spirit Lake, and Spokane participants are willing.

Leaving Moscow at 11 am for an 11:30 am Deary demonstration, some of us will also travel to protests in Orofino at 1:30 pm and in Kamiah at 3 pm, before returning to Moscow.

From 6:30 to 8:30 pm on Thursday evening, June 6, Idahoans and eastern Oregonians concerned about looming fracking are meeting in Boise for a strategizing session with activists and attorneys.  This third such gathering since October 2012 (after the Global Frackdown in Boise rally) will help shape our resistance over the next six months.  About a dozen activists are planning to attend this important convergence that welcomes people who are highly motivated and energized about this issue.  With frackers on our collective threshold, NOW is the time to save our surface and ground waters, agriculture and recreation, air quality and climate, and subsequent health from our clueless regional politicians and to halt further oil and gas drilling.  Several organizations have already started ongoing initiatives, while innovative ideas for various anti-fracking campaigns are constantly emerging.  On the eve of our Boise action at the main IDL office, we hope that you and your associates will consider attending this important gathering.  Please contact Alma Hasse at idahocare@yahoo.com for the meeting location and further logistics.

Southwestern Idaho fractivists are meeting at 3 pm at the Idaho Department of Lands unit that houses the director and the lands, minerals, and range division, near the state capitol in downtown Boise.

WIRT is also instigating public participation at IDL offices in Idaho Falls, McCall, Priest Lake, and Sandpoint.  Please contact us if you can organize or participate in a demonstration in any of these places.