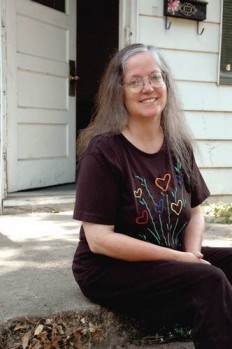 Wild Idaho Rising Tide continues with its objective of being a climate change watchdog group.

The megaloads may be gone, but Wild Idaho Rising Tide – the activist group credited and blamed for forcing oil company infrastructure loads to circumvent this town – remains.

“It’s sort of a headquarters and office as well,” Yost said. “We share the location with our members and folks in the community. But because there can be some backlash against climate activists like us, we aren’t necessarily making that (the address) available to the public.”

Local concerns about potential retaliation, however, didn’t stop Yost from speaking out about big-picture issues, including the state of American politics.

“We believe the entire presidential election process can be bought out by the oil companies,” she said. “Electing one of the candidates is just an electing-the-lesser-of-two-evils proposition.”

WIRT, with about 200 people signed up in support of the group’s mission, was the principal organizer of downtown protests over the past two years when oversize ExxonMobil equipment loads came through town en route to Canadian tar sands oil fields. No similar shipments are scheduled at this time.

“There are a couple of organizations that are tracking whether more are coming,” Yost said. WIRT members, meanwhile, have been busy traveling both to Canada to support anti-tar sands actions and to Montana in opposition of coal trains traveling west through Idaho and Washington.

“Each coal car sheds one pound of coal dust per mile,” Yost said. “And there are 125 coal cars usually in a train. That’s some pretty intense health and environmental implications for the region.” What’s more, Yost said, continued coal extraction adds to climate change. Most of the coal is destined for China and other foreign customers.

“Since we’re a climate justice and activist group,” Yost said, “we understand the implications of China burning all that North America coal.”

Yost acknowledged that she and other activists are criticized for their stand against human-caused climate change by those who question the science behind it. “We have plenty of criticism, even from our own city government,” she said.

A majority of the Moscow City Council here voted to allow the passage of megaloads through town because the Idaho Transportation Department, not the city, has authority. Most of the loads came through at night under police escort. The demonstrations resulted in a number of people being arrested and pleading guilty to reduced charges for going into the streets to stop the loads.

WIRT’s new headquarters, while small in size, promises to be the hub for ever-expanding actions, Yost said. In addition, the site provides a place for out-of-town activists to stay while traveling to actions elsewhere, she said.

“We’re also hoping to serve as an information resource center,” Yost said. “We’re partners with another group here in town, the Palouse Environmental Sustainability Coalition, and they have been accumulating a lot of information, material, movies, and such, and we’ve invited them to house that here so people can learn more.”

WIRT started, Yost said, as a spin-off of the Missoula-based Northern Rockies Rising Tide, where a number of Moscow people had been involved in seminars and actions. While the megaloads appear to be gone from Moscow’s streets, Yost balked at anything close to a mission-accomplished declaration.

“We’re reticent to do that because we don’t know if they’re going to come back again.” Nonetheless, she said WIRT has become the anti-tar sands “torch-bearer” against the “largest industrial project on Earth.” She described the opposition of fossil fuel extraction by WIRT and other groups so far as the ignition of small brush fires of opposition destined to grow larger.

“We’re also helping lead the charge for alternative energy,” Yost said. “We believe right now that we live in an oil or fossil fuel sort of hegemony state. People really don’t have a say against a particular form of energy at this point.

(By David Johnson, The Lewiston Tribune)