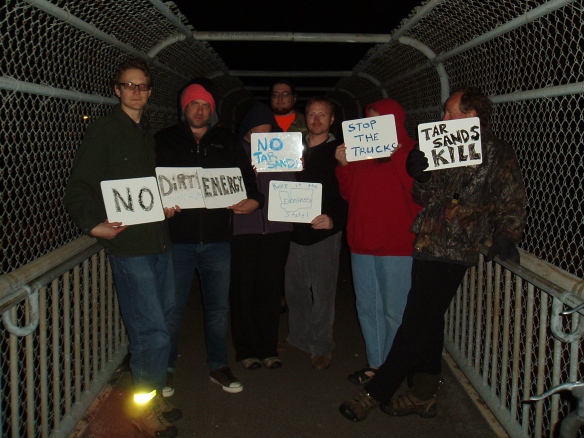 In recognition of International Stop the Tar Sands/Climate Impacts Day on Saturday, a group of about eight activists met near East Third Avenue in Spokane, Washington, on Sunday evening, May 6, to protest megaloads of oversized equipment bound for Alberta tar sands operations from the Port of Pasco.  ExxonMobil/Imperial Oil has been using Highway 395, Interstate 90, and city streets in Spokane and Spokane Valley since mid-October to transport road damaging shipments weighing up to 400,000 pounds and stretching over 200 feet long.  Diverted in Idaho from their originally intended Highway 12 route by court challenges and from their alternative Highway 95 path by Moscow area protests, these pieces of a tar sands/bitumen processing plant will expand Canadian carbon fuel extraction, American dependence on oil, and continental greenhouse gas emissions, while reaping exorbitant profits for one of the wealthiest corporations on Earth.

From the pedestrian walkway over Third Avenue near South Regal Street, Spokane climate justice activists held protest signs asserting “No Dirty Energy,” “Tar Sands Kill,” “Stop the Trucks,” and other statements (see photo).  While waiting for the megaload convoy’s arrival, they observed flagger trucks and warning signs posted along Third Avenue at about 11:30 pm as well as an early police car moving up to 50 miles per hour on the city street.  Between midnight and 12:20 am on Monday, several other police and support vehicles cruised through the area, some with blacked-out license plates.  The convoy, consisting of Washington state trooper escorts and eight flagger trucks displaying illuminated “oversized load” signs, accompanied two megaloads along Third Avenue – a large, blue, trailer-like box and a frame structure full of pipes and parts.  Another protester later saw four megaloads among a cluster of vehicles exit the interstate at Barker Street in Spokane Valley.  All of the demonstrators noted that the heavy modules and their convoy traveled inappropriately rapidly through the city limits and did not seem to notice protesters’ presence.  People interested in upcoming expressions of First Amendment rights through anti-megaload assemblies in the Spokane area over the next few weeks can contact SpokaneMegaloadOpposition@riseup.net for more information about the time and location of protests.

Citizens throughout the Northwest will continue to coordinate and organize demonstrations to oppose and impede tar sands megaload and coal train traffic, to prevent increasing carbon emissions precipitating global climate change and to dissuade financiers of such dirty energy schemes.  Scientists like James Hansen (https://www.commondreams.org/view/2011/06/04-5) estimate that the Alberta tar sands contain enough carbon fuels to raise the concentration of carbon dioxide (CO2) in the Earth’s atmosphere by 200 parts per million (ppm).  By comparison, pre-industrial atmospheric CO2 levels averaged 280 ppm, and current, rising concentrations measure over 380 ppm, similar to a pre-human climate approximately 650,000 years ago.  Currently, 64 mostly foreign-owned corporations have mined only two or three percent of the Alberta tar sands through several hundred projects.  As the presently single greatest contributor of atmospheric carbon in North America, full tar sands production would bode “game over” for the Earth’s climate, by releasing too much CO2 to afford any future chance of climate stabilization.