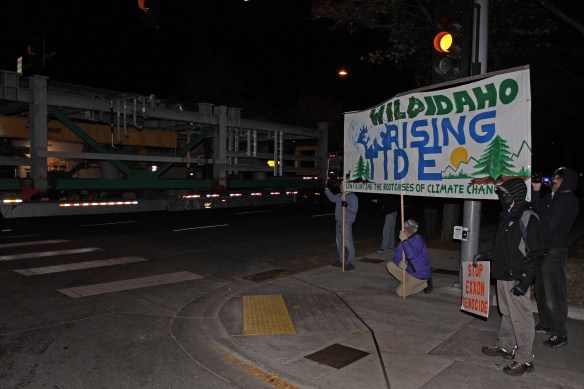 While America sleeps, the mechanisms of planetary demise rumble through our streets toward the dirty depths of our oil addiction hell.  As most of the nation remains fixated on the Keystone XL and other tar sands pipelines, the machinery that processes the low-grade Alberta fuel that fills those conduits rolls closer to construction.  Some brave and abandoned Northwesterners are physically confronting ExxonMobil/Imperial Oil’s tar sands equipment as it degrades their roads and rights on the way to devastating whole watersheds and cultures.

Stand up to Big Oil with us on Tuesday, December 6, as three more tar sands megaloads leave the Port of Lewiston after 8 pm to independently traverse Highway 95, move through Moscow together, then travel north to the milepost 405 parking/staging area on the Coeur d’Alene Reservation.  Protected by Moscow city police at curbside and by Idaho state troopers, flaggers, and pilot vehicles in the convoy, these 15-feet high, 24-feet wide modules commandeer two lanes with their 60,000-, 130,000-, and 145,000-pound weights and 70-, 120-, and 125-feet lengths.  For more logistical information and weather-influenced scheduling updates, see http://www.kearltransport.com/.

To monitor these transports, please converge with your recording or documenting devises at 7 pm or after the demonstration, at the corner of Second and Washington streets near Moscow City Hall.  To protest this disastrous extension of our fossil fuel dependence, please met between 9:30 and 10 pm at the same location.  On behalf of the thousands of concerned citizens and climate justice activists across the country who would shut down tar sands and shale gas operations tomorrow, Wild Idaho Rising Tide welcomes your participation on Tuesday and every evening.