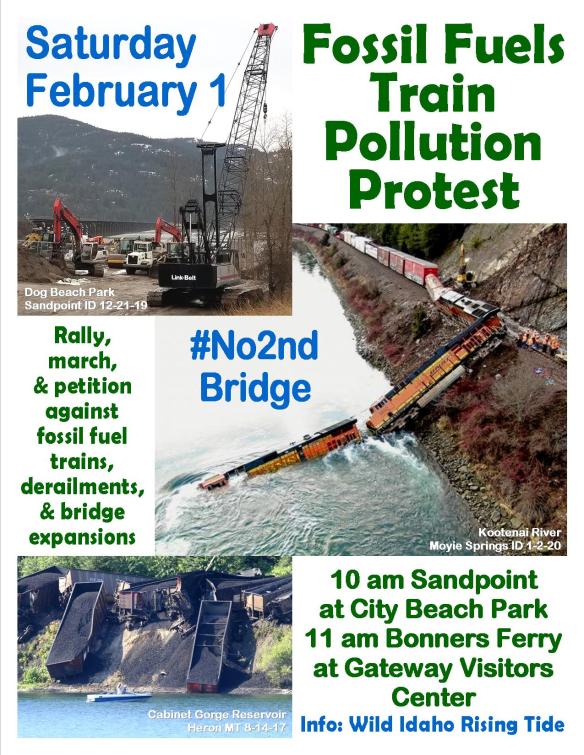 On Saturday, February 1, please join Wild Idaho Rising Tide (WIRT) climate activists, members, friends, supporters, and allies for rallies and marches in Bonner and Boundary counties, objecting to fossil fuels and hazardous materials train pollution and risks to public and environmental health and safety, and to railroad infrastructure expansions and ongoing incidents increasing these threats, such as the rockslide derailment of two Burlington Northern Santa Fe (BNSF) Railway, mixed freight train locomotives onto the banks and submerged and leaking at least 2,100 gallons of diesel fuel and engine oil into the Kootenai River near Moyie Springs, north Idaho, since January 1, 2020.

To commemorate the one-month anniversary of this major environmental disaster, which prompted multiple, emergency response agencies to rescue both a two-person, BNSF crew and a remote, forested, international river, we are gathering at 10 am around the City Beach Park pavilion in Sandpoint, Idaho, for a brief, information sharing rally.  Carpooling to the Gateway Visitors Center in Bonners Ferry, Idaho, near the city parking lot off U.S. Highway 2 and 95, we are marching at 11 am and returning to Sandpoint by 1 pm, to accommodate participants attending a later event.

Respond early with your intentions to participate in this protest, bring your friends, family, relevant signs and banners, and warm, winter and rain gear, and contact us if you can assist with sign creation, event transportation, #No2ndBridge petition signatures, and attorney recruitment for a legal challenge insisting on a full, #No2ndBridge, environmental impact study and statement.  We are demanding that government agencies enforce the remedial and preventative measures described in this announcement, as we express our resistance to further ecosystem and economic devastation imposed on rural communities, either through disaster or design, by the private profiteers of inherently perilous, fossil fuels pipelines-on-rails.  Frontline, WIRT activists and allies will not relent in opposing BNSF bridge and track expansion across Sandpoint, Sand Creek, and almost one mile over Lake Pend Oreille.

Sign the Petition to Deny and Revoke Permits for the BNSF Sandpoint Junction Connector Project, and see the BNSF Kootenai River Wreck and Spill facebook album for almost 70 photos, links to nine previously posted, WIRT articles, and forthcoming updates on fisheries impacts, spill “cleanup,” and engine removal, describing the Kootenai River derailment situation closely scrutinized by WIRT  [1, 2].  Local and industry news outlets printed some of the last WIRT newsletter, and we are working on media releases and comments to agencies, offering the dissenting side of this catastrophe story [3, 4].

Across the Idaho Panhandle, BNSF hauls about six each, loaded and residually empty, Powder River Basin coal and Bakken crude oil unit trains every day; Union Pacific carries three-plus Canadian tar sands and Bakken oil unit trains per week; and both pull numerous, fossil fuels and hazardous materials tank cars, intermixed with other freight, daily between interior, hydrocarbon extraction fields and West Coast refineries, power plants, and crude export terminals.  Just one derailment of any of these trains could devastate entire communities and watersheds with deadly, explosive, fiery, and inhalation hazard chemicals and toxic cargo spills in the rugged river canyons of north Idaho and western Montana, vulnerable to floods, avalanches, landslides, and wildfires.  First responders trained and funded by the perpetrators of anticipated derailments attempt to protect rail line communities from the harms of such tragedies, but they cannot prevent them with emergency preparation.  Despite litigation to enforce better railroad procedures, hundreds of pounds of coal dust fly off uncovered coal cars every day, into the regional river sources of socioeconomic vitality.

A Decade of Idaho & Montana Derailments

The New Year’s Day, BNSF locomotive derailment implicates the intrinsically unsafe, business practice of running 40 to 60 fossil-fueled trains every day, transporting ANY type of cargo, along the shores of two mountainous, Columbia Basin rivers, the Kootenai and Clark Fork-Pend Oreille.  Obviously without contingency plans for similar, future, engine derailments, ALL of the hundreds of daily, carcinogenic diesel-spewing, half-million-pound locomotives predictably, if not negligently, threaten ongoing pollution and compound previous dangers and damages to rural communities reliant on healthy and safe environments.

To the Washington border, on the Canadian-Union Pacific rail line that enters the U.S. at Eastport, Idaho, and on the BNSF and Montana Rail Link (MRL) tracks from the continental divide westward through Whitefish and Missoula, Montana, all three railroads have inflicted dozens of derailments along and into major rivers during the last decade, January 1, 2010 to 2020.  Including a greater number of injurious and fatal, train collisions with vehicles, pedestrians, wildlife, and pets, regional train wrecks average more than two per year.  This chronologically ordered sample from the last ten years represents only internal railroad incidents that mostly happen along waterways.

* A BNSF, spilled grain train in a Kootenai River canyon near Leonia, Montana, on March 20, 2011

* A Union Pacific, dumped soybean train on washed-out track in the Colburn Culver area north of Sandpoint, Idaho, on April 1, 2012

* Two BNSF, freight trains along the Kootenai River near Crossport, Idaho, within a week before May 22, 2014

* A MRL train with six airplane fuselages that slid toward and into the Clark Fork River near Superior, Montana, on July 3, 2014

* A MRL, empty, grain train and three locomotives in a collision that hospitalized engineers, near the Blackfoot and Clark Fork rivers east of Missoula, Montana, on November 13, 2014

* A Union Pacific, grain train that triggered a steep mudslide above the Moyie Dam near Moyie Springs, Idaho, on March 15, 2017

* A BNSF, empty, coal train on a wash-out that released smelter slag lead into Lake Pend Oreille in Ponderay and Kootenai, Idaho, on March 17, 2017

* A BNSF, corn train that damaged and closed two U.S. Highway 95 lanes near the historic, Valley Vista Ranch barn in Cocolalla, Idaho, on May 1, 2017

* A MRL, loaded, coal train that dumped and combusted 7,000 pounds of coal along and into the Cabinet Gorge Reservoir, through derailment, track clearance, and five fire-season weeks of neglected “cleanup” near Heron, Montana, after August 13, 2017

While continuing our investigation of the environmental impacts of this instance of inevitable derailments, WIRT is currently composing a letter describing concerns and demands to the various tribal, federal, state, and local agencies involved in remediation of the BNSF locomotive derailment, diesel spill, and removal in the Kootenai River.  We are earnestly and respectfully encouraging and requesting that elected, appointed, and agency officials protect the public trust by conducting these rigorous analyses and public disclosures of this disaster in the Kootenai River watershed.

* Oil Spill Information: Reveal to the public the amounts of hazardous materials that leaked into the river, from the BNSF locomotive fuel tank that held between 1,900 and 5,500 gallons of diesel, and from the crank case that carried up to 250 gallons of engine oil.  The U.S. Environmental Protection Agency (EPA) called these hazmat releases “minor,” after divers found only water inside the sunken locomotive.  Although most “cleanup” operations recover 10 to 15 percent of oil spills in water bodies, crews removed only 180 gallons of diesel and oil with skimmers and 6,200-plus feet of containment boom, and downstream stakeholders closed water intake pipes and documented oily sheens on the river in Bonners Ferry.

* Independent Monitoring: Conduct and publicly share the methods and results of independent, unbiased, scientifically rigorous sampling and testing of water quality for oil pollution, monitoring of derailment and spill effects on fish and wildlife and the surrounding environment, and “cleanup” of diesel infiltration of the river, all at appropriate places and times and without the conflicted involvement or interference of BNSF officials, employees, and contractors.

* Fish and Wildlife Protection: Describe consultation processes with the U.S. Fish and Wildlife Service responsible for regulating the significant impacts of BNSF activities in and/or upstream of the federally protected, critical habitat of three endangered species — threatened bull trout and burbot and endangered white sturgeon — especially the further damages imposed by BNSF floating and dragging its submerged locomotive across the Kootenai River, to sand bars on January 25 and 26, and dismantling and removing it as scrap on the shallow shore.

* Incident Investigation: Complete a thorough, Federal Railroad Administration investigation and public report on the pre-rockslide causes of this accident that BNSF could have prevented with a rock barrier and train operator warning fence in the wreck area, which it removed and did not replace during rail corridor maintenance several years earlier.

* River Community Justice: Publicly announce and enforce penalties, fines, and operation revisions assigned to culpable BNSF, for violations of: 1) worker safety laws, with its derailment endangerment of crew members, 2) the Clean Water Act, with its hazardous materials contamination of public, private, and municipal drinking, fishing, and recreation water sources, and 3) indigenous treaties and agreements, with its derailment and spill effects on Kootenai Tribe river rights and uses, cultural practices, and on-site and downstream, endangered fisheries and restoration hatcheries.

* Locomotive Recovery Plans: Require contingency plans and closely available equipment for removal from lakes, rivers, streams, and wetlands of heavy, derailed locomotives that fall below railroad tracks and bridges, to reduce harms from further such catastrophes, and as part of regional Geographic Response Plans and permitting processes for railroad infrastructure repair, replacement, and expansion projects, such as the inadequately government reviewed and regulated and only initially implemented, BNSF Sandpoint Junction Connector project proposed for Lake Pend Oreille, Sand Creek, and Sandpoint, Idaho.