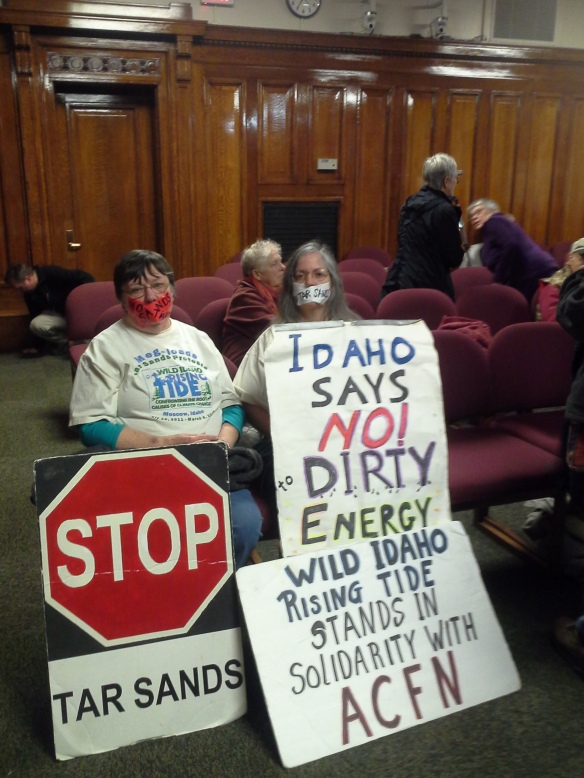 Although the city sought written community input prior to the “hearing,” it disallowed opportunities for direct engagement through verbal public testimony and queries.  Two Wild Idaho Rising Tide (WIRT) activists re-asserted some direct democracy among the corporate lackeys, decrying this instance of lack of public involvement by occupying the front row near the chambers door, with mouths covered with tape reading “No Tar Sands” and with protest signs declaring “Stop Tar Sands,” “Idaho Says No! to Dirty Energy,” and “Wild Idaho Rising Tide Stands in Solidarity with ACFN” (Athabasca Chipewyan First Nation).

Most of the seventeen participants invited to the table from as far as Boise expressed concerns about possible infrastructure damages and traveler safety risks imposed by the widest (27 feet), longest (441 feet), and heaviest (1.6 million pounds!) ever proposed overlegal loads to traverse Moscow by late January.  Few seemed aware that these megaloads are the key components for the Calumet-owned Montana Refining Company in Great Falls, Montana, to triple its production of tar sands oil by early 2016.  Most of the officials noted that they had not received compiled public comments and questions early enough before the meeting to address them.

For more information about this impending megaload invasion and associated, compromised public processes, see the following and forthcoming WIRT and media news accounts.

Report and interview starting at 13:07

Report and meeting recording starting at 36:48